On December 2, 2016 an estimated 500,000 to 750,000 Muslims gathered in central Jakarta. It was the biggest demonstration since the fall of Suharto, and possibly the largest religious mass gathering in the history of Indonesia. Many had traveled from as far as Sulawesi to what the organizers, a coalition of Islamist groups, called “Action to defend Islam III” (Aksi Bela Islam III). Two demonstrations in October and November had already attracted considerable crowds. Many national, but especially international commentators presented the protesters as an angry “mob” of “thousands of Hard-Line Muslims,” illustrated with photographs of young men clad in long white robes against a background of burning cars. International newsmakers flew camera drones over the crowd and spliced together the more aggressive moments of the protest to depict another outraged and irrational mob of angry Muslims despite the organizers’ and most protesters’ efforts to present the demonstration as orderly, clean, and polite (Mazzarella 2010). Even most of the more nuanced observers interpreted the protest as a symbol of Indonesia’s increasing Islamization or sectarianism. But such a view does not help us understand the array of factors that motivated the protest, and why protesters found participation appealing. Instead, we need to consider the variety of emotions and demands that coalesce into the category understood as religion.

The protest organizers demanded the imprisonment of the Governor of Jakarta, Basuki “Ahok” T. Purnama, on the charge of blasphemy. Ahok, who is a Christian of Chinese descent, had succeeded Joko Widodo when the latter became president in 2014. Ahok’s opponents named their coalition the “National Movement to Guard the MUI Fatwa (GNPF-MUI),” and called for the government to follow a statement from the Council of Indonesian Muslim Scholars, which demanded that Ahok be punished for insulting Islam.

The statement originated with a video snippet circulating online. In a speech during his campaign for re-election as governor of Jakarta, Ahok made a jibe at politicians using Sura 5:51 of the Qur’an, (which some interpret as prohibiting Muslims from electing non-Muslim into political offices) for political ends. An academic and former journalist cut the passage from the video and posted it on his Facebook page with a provocative headline suggesting that it had been blasphemous (Penistaan terhadap agama?). The video went viral. Afterwards, calls for Ahok’s resignation, imprisonment, and even death resounded on Indonesian social media.

Why did this seemingly small issue spark such an outrage? Several commentators have explained it by referring to long-standing anti-Chinese sentiments among Indonesian Muslims. But most of the posters at the rally, as well as the images and articles circulating online, specifically attack Ahok — not Chinese Indonesians in general. Some protesters even made a point of not only keeping in with the organizer’s request to avoid littering, but also of being inclusive and polite towards Chinese-looking observers during the rally. 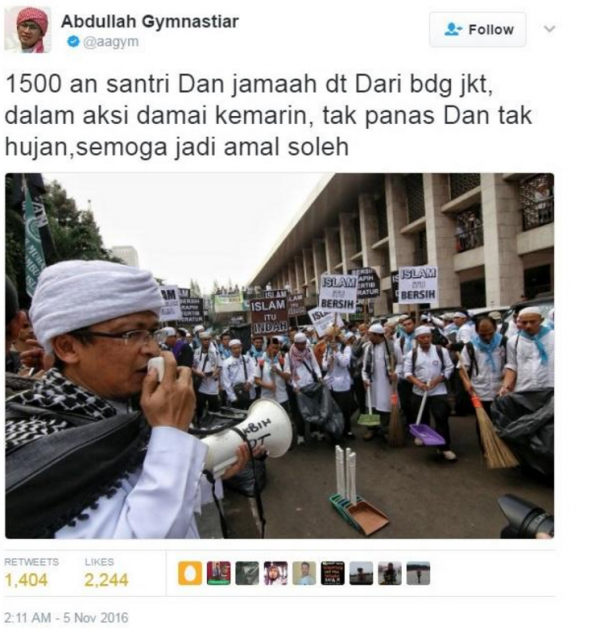 A photo of Abdullah Gymnastiar, celebrity preacher, posted to his Twitter account, exhorting demonstrators to clean up after a November, 2016 protest in Jakarta because “Islam is clean.”

More revealing were the gaps in the public discourse of liberal middle-class Indonesians, especially via the dominant social media such as Facebook, Twitter, and Instagram. Here the coverage focused almost entirely on the accusation of blasphemy. That Ahok, who is popular with middle-class Jakartans for handling flooding and traffic problems, was opposed by many urban poor hardly found mention in mainstream media. To make way for flood prevention infrastructure and the creation of public spaces and parking lots, Ahok’s government had evicted thousands of squatters throughout the capital since 2015, many of whom had built homes along the banks of the Ciliwung River. Some of the evicted have been given new housing in compensation — though the new apartments are smaller and more expensive to maintain — while others who were not officially registered received nothing. The opponents of these measures hold Ahok personally accountable. An example is the Urban Poor Consortium, an NGO for housing rights, which has been running an anti-Ahok campaign complete with banners and T-shirts demanding that Ahok be “evicted in the first round.” The organization’s Facebook profile picture is a crossed-out Ahok portrait with the words, “Reject Ahok” (tolak Ahok), very much like the ones that many of the Aksi Bela Islam protesters carried, even though the organization held their own separate rallies.

It took most media, both Indonesian and international, several months to integrate this aspect of anti-Ahok sentiments into their story of a purely sectarian campaign against Ahok. In the “Friends of Ahok” (Teman Ahok) Facebook group, general statements such as “All humans are equal” (semua manusia sama) suggested that Ahok’s opponents dispute such equality, whereas the Islamists at the web portal Nahimunkar accused Ahok of looking down on them and of being too arrogant. For the most part, Ahok’s supporters and opponents were talking at cross purposes. An academic commentator on the website of the Muslim mass organization, Hidayattullah, argued that Ahok should be punished for his blasphemy so that “citizens who are weak and poor (warga lemah dan miskin) will not be evicted anymore (tidak lagi digusur).” This connection between the rally and the evictions was rarely to be found in websites frequented by Ahok’s supporters. Instead, almost all social media outlets focused on Ahok’s alleged insult to Islam. In this framing, Ahok’s opponents saw Islam under threat, while his supporters interpreted the MUI statement as proof of the increasingly militant role of Islam in Indonesia. The liberal daily Jakarta Post suggested that Ahok had “opened a Pandora’s box of sectarian sentiment” which would set the tone for the 2019 presidential election, while the conservative daily Republika reproduced statements by Islamic scholars and politicians accusing Ahok of blasphemy and of causing trouble. When Ahok eventually lost the election and was afterwards convicted of blasphemy and sentenced to two years imprisonment, the tone of the discussion did not change.

A complex struggle has been reduced to the increasingly familiar dyad of identity and religion. This is especially visible in social media. The rigidity of the Facebook template, for instance — compared to older and more chaotic “self-expression” webhosting services such as Myspace or FortuneCity – foregrounds the identity of individuals, even offering pre-defined religious and political affiliations.

My point here is not that the protestors at the anti-Ahok protests brought only their material grievances to the protests and did not actually feel that their religion had been insulted. Instead, I want to highlight the way religion absorbs a variety of grievances. In the many cases of Indonesian moral panics, neither journalists nor scholars systematically connected perspectives on socio-economic conflict, negotiations between rival Islamist organizations, and anti-globalization rhetoric to the language of piety and offense (Mulyanto and Pontoh 2017). At the same time, simply declaring the religious claims cover economic troubles runs the risk of missing the complex relationship among grievances, piety, and anger. It is rather the interplay among these three factors that led to mobilization of large numbers of differently motivated people. As one banner seen at the protest read: “Ahok step down – he views Muslims as second class people” (Ahok Mundur – dia menganggap ummat Islam sebagai manusia kelas dua ; underlining in the original). This statement captures what made the protestors coalesce: anger at being treated unjustly, deprivation of political and economic participation, and fear of losing recognition and community. Only by overcoming the distracting opposition of the pious and the impious — and peeling away the identitarian reductions which some dominant forms of social media encourage — will we be able to understand what turns YouTube clicks into marching feet.