There’s a story Rayna Rapp recounts from her graduate school days at the University of Michigan of encountering Gayle Rubin as an anthropology major enrolled in her recitation section. In Rayna’s telling, her response to the undergraduate fascinated by kinship and the work of Claude Lêvi-Strauss was initially one of dismissal: “Don’t bother me. I’m busy making the revolution, who cares about kinship!” (2007: 414). But the story turns on a later point when, upon reading that student’s class paper one evening, Rayna “got on my bicycle and went over to Gayle to apologize and said, ‘You’re right, you do have to talk to me about anthropology. You’ve just turned the goddamn field upside down’” (2007: 415). Rayna likes to emphasize the brilliant theoretical contributions of this budding scholar. I like to think about Rayna as someone who “understood what I was holding in my hand” and rode her bike, right then in the night, to talk to the young student whose work so amazed her (2007: 415). 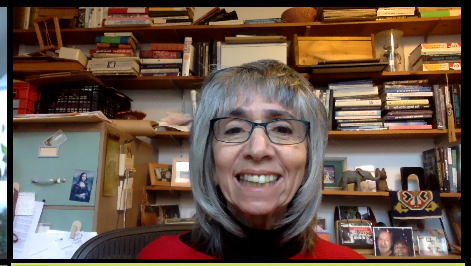 This narrative circulated again in December 2020 during a “Zoom” event organized by current and former students to celebrate Rayna Rapp’s plans for retirement from the academy. Representing a range of generations, geographies, social locations, and political views, the participants held in common our deep respect for the life’s work in which Rayna has been engaged and her ongoing optimism about the “world-making” or “worlding” yet possible in a perilous era (Ginsburg and Rapp 2017: 183). When dozens of those colleagues, students, friends, and family members provided statements about the ways that Rayna has inspired, and continues to inspire them, Rayna responded with anecdotes acknowledging friendships, scholarly work, and the time spent together over the years. As one attendee commented, even on her departure from the ranks of the faculty, Rayna carried on the work of community-building. For a computer-mediated event and at a historical moment when, by virtue of the pandemic, distance is both aspiration and verb, the several hours we spent in the “Rayna-wide web” (to borrow from another participant) seemed remarkably intimate.

If comparatively few women served as faculty in anthropology when Rayna and her peers entered graduate school and, as Gayle Rubin has put it, there was “no visible future” for female graduate students in in the early 1970s (quoted in Rapp 2007: 420), they nonetheless graduated with the aim of “creating space” for a more expansive academic world and an increasingly heterodox definition of the field (Rapp 2007: 424). But academic labor has been proletarianized, sped up and stretched out, especially in the late twentieth and early twenty-first centuries, and just a quick glance at Rayna Rapp’s cv reveals her prolific scholarship, along with her involvement in teaching seminars and on student committees. Summarizing those endeavors is a task for another author; the rather obvious point here is that mentorship, much like building community and revolution, takes many forms and by dint of necessity is more often strategic than time-intensive.

I believe that I’m not alone in thinking about Rayna as someone in the center of major anthropological and multi-disciplinary discussions, garnering diverse audiences and occupying much of her time, as well as about my appreciation for the powerful moments when we were able to have substantive conversations. In similar spirit, several people from the Zoom celebration spoke about the crucial role that Rayna had played in offering encouragement and advice during periods when their work—for example, on politicized ethnographies of the USA including studies of disability and normativity, activism, new kinship forms, queer anthropology, reproductive health, science and technology, etc.—was discounted within institutional and scholarly hierarchies.

Rayna Rapp offered me, as one of her students, both intellectual guidance—the strong contention that a feminist critical anthropology was about addressing social inequity, including the discipline’s own roots in colonialism, along with her keen eye for locating the thread of an argument—and her willingness to be present when it really mattered. To the young survivor of sexual assault, she gave practical support (referral to a feminist law firm, the name of another survivor to talk to) and the vital message that nothing about the event was my fault. Decades later when I lost my life partner to a brief and exhausting battle with dementia, Rayna showed up, once more, to speak with me about her own experience of becoming a widow and the struggle to keep going on amidst the obligations of an academic career. Like so many in Rayna’s web of students, friends, and kin, what I have found deeply reassuring are her insistence on viewing all aspects of one’s life as part of the feminist journey and the fact of being recognized.

It may hardly be surprising that, of Rayna’s considerable record of anthropological contributions, most important to me is her ethnographic attention to embodied experience as a lens through which to examine the social production and material consequences of health, disease, reproductive decision-making, and bodily difference. In conjunction with the eco-social perspectives articulated by public health researchers, such an approach looks at biological phenomena, including diseases like breast cancer that have been my focus, as dynamic processes not solely determined by genetic and/or behavioral factors and where “the terrible costs of social inequity” often play powerful, if under-recognized roles (Geronimus 2013; Krieger 2005, 2013; Rapp 2015: 170). The tasks of a feminist critical ethnography, Rayna Rapp tells us, are to document the sociocultural and economic contexts of power and marginalization, to engage in translational work linking diverse forms of experience and knowledge, and, most of all, to remember (Rapp 2011: 666, 2012).

As a representative of an early cohort of Rayna’s students, I also want to mention her earlier interest in gender, stratification, and the state. Inspired by Marxist feminist analyses and anthropologists including Eleanor Burke Leacock, that scholarly work examined reproduction as a threefold and deeply social process—the replication of cultural identities and, in all too many places, hierarchy, as well as kith and kin—and its aims were emancipatory. As critical anthropologists have long contended, it is important to recall the history of egalitarian societies along with the incompleteness/unevenness of capitalism globally, lest we view processes of subjugation and inequality as somehow inevitable. By emphasizing the strategies of resilience routinely waged by families, communities, and activists, as well as the need for a “politics of hope” in the USA and elsewhere, Rayna and her collaborator, Faye Ginsburg, continue to elaborate on this argument and its practical application (Ginsburg and Rapp 2015: 170; see also Ginsburg and Rapp 2013, 2017, 2020; Rapp 2001, 2007, 2012). Ginsburg and Rapp identify the cultural innovations and “accessible futures” engendered by disability activists as new forms of world-making (2020:179, 190). The rest of us may well draw upon these ethnographic and theoretical insights, along with the Rayna-wide web, for inspiration and hope.

Geronimus, Arline T. 2013. “Deep Integration: Letting the Epigenome Out of the Bottle Without Losing Sight of the Structural Origins of Population Health.” American Journal of Public Health 103(51): 556-563.

__. 2020. “Disability/Anthropology: Rethinking the Parameters of the Human: An Introduction to Supplement 21.” Current Anthropology 61(Supplement 21): S4-S14.

Cite as: Anglin, Mary. 2021. “Reclaiming Experience, Stories, and Intimacy as Feminist Modes of Knowledge: Learning from Rayna Rapp.” In “Genealogies of the Feminist Present: Lineages and Connections in Feminist Anthropology,” edited by Lynn Bolles and Mary H. Moran, American Ethnologist website, 24 May 2021, https://americanethnologist.org/features/collections/legacies-and-genealogies-in-feminist-anthropology/reclaiming-experience-stories-and-intimacy-as-feminist-modes-of-knowledge-learning-from-rayna-rapp

After twenty-five years of teaching at the University of Kentucky, Mary Anglin has returned to the N.C. mountains, where she continues her commitment to health and environmental justice and is training to become a community herbalist.