by Deborah A. Thomas

Bianca Williams began Duke’s Ph.D. program in Cultural Anthropology in 2002, the same year John Jackson and I began our jobs there as Assistant Professors. We were, in a way, newbies together, and Lee Baker had prepped us for meeting her, noting that she had been his prize undergrad student and that he lobbied hard for her to continue in the program. Her application essay had laid out a program of research into “wiggers” –a phenomenon that was not yet entirely normalized, one whereby white Americans would be so attracted to hip hop that they would assimilate its various signifiers and styles. As so often happens, as the result of both coursework and serendipity, circuitous paths converged to bring her to a different research project, one that has not only inspired her own students (and Black women anthropologists across the discipline), but one that has also pushed me to think harder about the relational dynamics of my own research and teaching. Bianca is, in the best sense, my mentor. 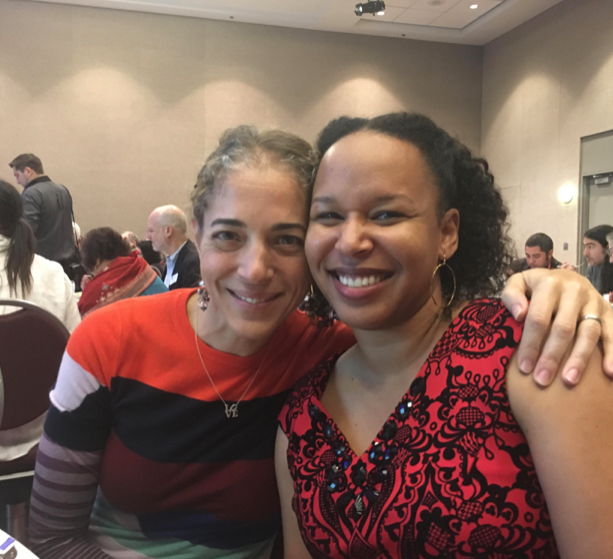 Bianca’s first book, The Pursuit of Happiness: Black Women, Diasporic Dreams, and the Politics of Emotional Transnationalism (2018), asks us what it means to center the experiences of middle-aged black American women in our analyses of contemporary social and political life. What would happen if we were able to move beyond popular myths about and images of black women “as a problem to be fixed” (3), beyond the complete invisibility of middle-aged black women within the context of U.S. racism and sexism, to glean a fuller understanding of the complexity of black women’s lives? Would we be able to take seriously black women’s attempts to inhabit pleasure? Leisure? Happiness? And if we were to take these attempts seriously, what can this teach us about affect (and its links to the material and transnational dimensions of racism, classism, sexism, heterosexism, and age discrimination)? Diaspora? Recognition? To the practice of fieldwork?

I want to linger a bit with Bianca’s analytic attention to diaspora, and with her argument that the “Girlfriends” she studied, a group of African American women who traveled frequently to Jamaica, understood their racial and gendered subjectivities as exceeding the nation state, and as “deeply connected to their participation in transnational processes and an engagement in what they envision as a diasporic community” (2018: 4). In the book, Bianca uses the concept of “diasporic contact zones” to highlight some of the power differentials within diasporic formations, but also to show “how people use leisure, laughter, and the pursuit of happiness to construct diaspora” (2018: 9). She is interested in how this concept helps us “examine how African Americans and Jamaicans express their understandings of racialized subjectivities (indexed by nation, class, and gender), in spaces where interlocutors are simultaneously imagined as diasporic community members and nationalized ‘Others’” (2018: 68). Diaspora, here, is not a community of similarity but a community constructed in and through difference. The Girlfriends notice particular aspects of these differences; they remark on how Jamaicans have “held on to the African-centric parts” of their culture (2018: 79), how they did not, in their African American understanding of things, assimilate. They marveled at how Jamaicans can call themselves “‘Jamaican’ first and ‘Black’ second” (2018: 80), noting that possessing a feeling of belonging to one’s country, and not having to define oneself in relation to (or in opposition to) white people, was a privilege, “a release from constantly experiencing life within the racialized dichotomy of Black and white” (2018: 80). The Girlfriends were also, at times, annoyed by this, irritated and frustrated when Jamaicans did not share their particular form of racial consciousness and solidarity.

Diasporic differences did not only make themselves known in terms of the experience of being black in a majority black country. Significant power asymmetries also constitute the Girlfriends’ diasporic relations. For the Jamaicans with whom they interacted, the Girlfriends were American tourists first, and black second, and we watch them attempting to mitigate these asymmetries (without, sometimes, fully appreciating them). Germane here is Bianca’s analysis of how the Girlfriends attempt to “give back to Jamaica,” “engaging in a form of strategic tourist consumption with the intention of economically cooperating with Jamaicans” because they view them as diasporic kinfolk (2018: 65). This form of critical (and conscious) consumption is common to narratives of black capitalism in the USA, but it is less mobilized in the Jamaican context. They attempted to show what Bianca calls “diasporic heart” in their “diasporic contact zones,” giving them a way to create relationships. These relationships, however, were developed and enacted primarily within the context of the tourism sector, which is the means by which they know Jamaica and come to feel recognized there.

I want to also draw attention to the important issues Bianca raises about recognition. If the misrecognition of Black women’s identities and affective lives, as Bianca tells us, “is central to multiple U.S. projects of oppression” (2018: 35), then Jamaica becomes a place where they can be seen and even sought after, where their bodies are beautiful and where their age is respected, where they are recognized as humans. They are excited by different rules, by being desired, and by being treated differently, not only by Jamaicans but also by white Americans in Jamaica, who, at least while in Jamaica, see them with new eyes.

As much as the moments of diasporic recognition create a certain bittersweet affective poignancy throughout Bianca’s text, moments of diasporic misrecognition are also moving, even more so in their gendered enactments. The Girlfriends are searching for sisterhood, yes, but sisterhood does not seem able to transcend national borders for the many reasons Bianca demonstrates (their class difference, their money, their American-ness, their misapprehension of the parameters and possibilities of “friendship” within the tourist milieu, their pursuit of other people’s boyfriends and baby fathers), and we see that this causes sadness and profound feelings of disconnection. The Girlfriends, thus, end up in two related and precarious predicaments. On one hand, they tried, as Bianca writes, “to stay in Jamaica as long as they possibly could without ruining the sense of fantasy, freedom, and enjoyment Jamaica gave them” (2018: 114). On the other, their visibility and recognition “frequently kept the struggles of Jamaican women invisible, particularly the wives, girlfriends, and baby mamas of the sought-after Jamaican man” (2018: 151).

Bianca’s research, and her praxis more generally, teaches us that if affect is social, it is also racial. Affect, Bianca argues, is a “process” (2018: 36), one that is therefore saturated by the same dimensions of inequality and symbolic and structural violence that are foundational to our broader worlds. Affective fields are also forms of knowledge, giving us “ways of knowing the world and figuring out how to navigate it” (2018: 37). This has long been the argument of black feminist scholarship, and we are indebted to Bianca for raising it again. She elaborates Diane Wolf’s concept of “emotional transnationalism” to think through how “race affects the emotional experience of international travel,” and “to connect the Girlfriends’ emotional lives with their transnational mobility” (2018: 4). She argues that “their access to virtual and international travel enabled them to temporarily replace their experiences of hardship and invisibility in the United States with fantasies of happiness, intimacy, community, and connectivity in Jamaica” (2018: 5). If their pursuit of happiness, as she writes, “is about accessing a certain form of privilege and community they do not feel they have in the everyday” (61), then becoming part of the Jamaican everyday would also shatter it.

Bianca also teaches us important lessons about anthropological research practices. First, she shows us how to integrate online research with face-to-face fieldwork. She argues that rather than conceptualizing media technologies as neutral objects, we must instead start from a point that positions “people as mediators of experiences.” This gives us a more comprehensive understanding of “how agency, power, and pleasure drive the circulation of both media technologies and the racialized ideologies that circulate with them” (2018: 164). Second, while Bianca argues that the Girlfriends traveled with a “diasporic heart” (2018: 66), she shows us throughout the text that she also did. This heart allowed her to probe beyond the Stella stereotype and recognize the complexity of the interactions she was observing. It enabled her to create strong, though not uncomplicated, relationships with the Girlfriends as they moved together in Jamaica and in the United States. And it propels her continued interventions into the political sphere, and her activist work within and beyond the academy. Bianca’s intense commitments to bringing scholarship, advocacy, and activism together, and her profoundly humanistic approach to life and relationships, inspire me as a scholar and as a teacher.

Deborah Thomas is the R. Jean Brownlee Professor of Anthropology and Director of the Center for Experimental Ethnography at the University of Pennsylvania.