In the twenty-first century, graduate schools ponder the ways they can enhance the educational experience of their students beyond the seminars where students learn to build good study habits, craft time management skills, and improve their writing techniques. Of all of those enrichments, the key to success in graduate school is good advising. Moreover, it is most imperative for women and other marginalized group members to overcome and circumnavigate class bias, racism, misogyny, sexism, and religious intolerance to have a strong supportive advisor/advisee relationship. The lack of or poor personal and scholarly assistance can undermine the overall quality of graduate school experience (see Gutierrez-Muhs, Niemann, Gonzalez, and Harris 2012). Further, emphasis should be placed not on the quantity or appearance of the support, but on the quality of the advisor/advisee relation. Those acts of shared wisdom, trust, and guidance can make an immeasurable difference. In addition, the qualitative distinction between good advising and good mentoring is found in what attributes are in the latter and not necessarily in the former. Although persisting and prevailing problems might still exist, a good advisor/advisee interaction that segues into mentorship makes for a healthy, happy, and successful graduate student. A mentor helps their mentee to maximize their potential by helping them to be the person they want to be. This holistic approach goes beyond career development. Needless to say, like all human endeavors, the mentor/mentee relationship has its ups and downs especially according to individual personality traits.

I draw on my own experiences as a graduate student at Rutgers New Brunswick in the 1970s and early in my professional career. I lucked out by having three supportive mentors. In graduate school my two mentors had different roles. One, Helen Safa, showed me the ropes of the academy, folded me into her academic and personal network and pointed me towards funding and a career. The second mentor, Vera Green, showed me by example of her own experiences as a Black woman and how to decipher the varying levels of mediocracy that blinded one to consider the academy as space with a level playing field. They both bridged assorted roles of advisor/advisee and mentor/mentee relationships at various points in time according to their own needs and personalities. For example, I lost my own identity as I became “Helen’s student,” research assistant and all around “gopher” (go for it). My intellectual and scholarly acumen was constantly tested by Vera Green. During my oral dissertation defense Vera badgered me with questions that I thought were answered in the text. After this “trial by fire” technique, she rewarded me with a lovely reception held in her home near campus. My third mentor came by way of meetings of the Association of Black Anthropologists. Johnnetta Cole and I reconnected during a AAA meeting seven days after my return stateside after eighteen months of fieldwork in Jamaica. I was very disoriented by just being in the USA on top of attending academic meetings. When we had a drink at the hotel lounge, I tried to explain my despondency, but Johnnetta B. Cole just listened and reminded me that what I was experiencing was quite all right, and actually common. I took deep breaths, hugged her, she patted my back, and I forged on. Forty-one years later, our mentor/mentee relationship is combined with the close friendship that is her style. I share her with hundreds of others, but I know we have a kindred connection. 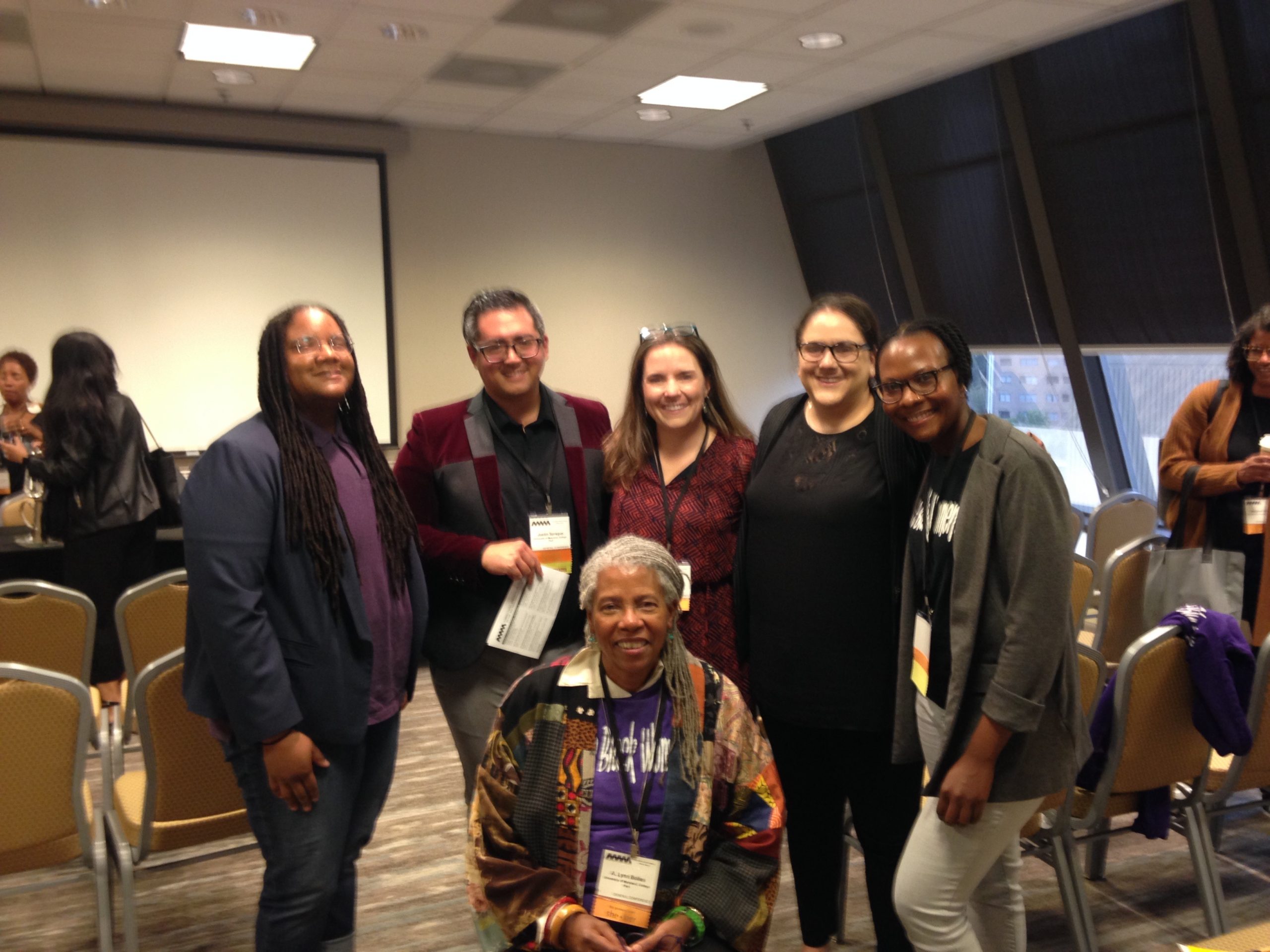 It was through this role modeling, actions, and motivation that I became a mentor for my graduate students at the University of Maryland College Park. I learned from the best and my goal was to share this largesse with my students. However, my intention here is not to examine my success as a mentor, but to address what my mentees gave back to me in terms of scholarship, guidance, and helping me be the person I want to be.

In 1989, I embodied a host of roles and identities when I arrived at College Park as a member of a hiring scheme to significantly raise the number of senior Black faculty at a university still under desegregation court orders. Tenured in Women’s Studies, located in the College of Arts and Humanities, my course offerings and scholarship drew graduate students from across the campus who never had a chance to work with a Black scholar, let alone a Black feminist scholar. As a group, these students were all working on African Diaspora materials in Comparative Literature, English, Education, American Studies, Latin American Studies, Anthropology, History, and Sociology. By word of mouth, they heard about me and came to my office door. At that time in most departments there were scant number of Black faculty or even faculty who were familiar with Black subject matter and people. Therefore, my body and my brain was of use to other faculty who were happy to share graduate students, most of whom were African American and starved for attention from someone with whom they could identify. From 1989 to 2015, I served as affiliate faculty member in Anthropology, African American Studies, Comparative Literature, American Studies, and Latin American Studies. In 2002, Women’s Studies, now renamed The Harriet Tubman Department of Women’s Gender and Sexuality Studies (WGSS) offered a doctoral degree and was recognized for its emphasis on antiracism, equity, social justice, intersectionality, and intellectual freedom. Over the years I chaired or was second chair to seven dissertations outside of the seven in WGSS and sat on over eighty-two doctoral committees. Known as the anthropologist who reads novels and was eclectic by curiosity my graduate students made me work hard to understand what they were doing, how I could help them, and where I could steer them towards a nuanced understanding of interdisciplinarity and intersectionality. 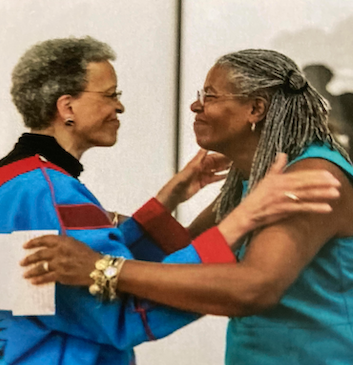 Johnetta B. Cole and Lynn Bolles

My brand of Black feminist anthropology of respect and reciprocity made me an active participant in the education of my graduate students. For the graduate students in sociology, communication, and education, I was most comfortable with all aspects of their work. However, I pushed them to consider interviewing the people whose communities were under their consideration and not to rely solely on data set analyses. Early on there were activists among them: Chi Kwan Ho, who in the middle of writing her interdisciplinary education dissertation was also an activist during the Beijing Tiananmen Square uprisings. I had to learn the politics of modern day China to understand what she was trying to get onto paper. Yh Patt, J.D. worked her doctorate in San Salvador including interviews with women in fear of the violence they faced because of their activism. Most of the anthropology students who worked with me were archeologists. Prepared with a rudimentary knowledge of the field, I knew how intersectional and Black feminist thinking would help them to see the racism and sexism in archeology and the history of the Black communities they were excavating. I was astounded at every meeting with those white women archeologists with their literal unearthing of cultural materials and findings from their archeological sites. Now equipped with a non-Eurocentric approach, their analyses broadened their understanding of what they dug up.

I had to resurrect my dormant French to decipher Haitian Kreyol, walked around with a Spanish dictionary for clarity while carrying a Portuguese dictionary for basic information. My graduate students tutored me on how to “read” films, television series, cooking shows, cookbooks, dance performances, non-binary fashion shows and the visual arts. Familiarity with postmodernism got me but so far when working with graduate students steeped in this body of theory. I was rescued and was schooled in the latest postmodern discourse as well as the ever expanding body of feminist and sexuality texts, postcolonial theories and new digital humanities scholarship. With each cohort of graduate students from across the campus in addition to those in Women’s Studies, my education was continuously enhanced and I always had to step up my game. 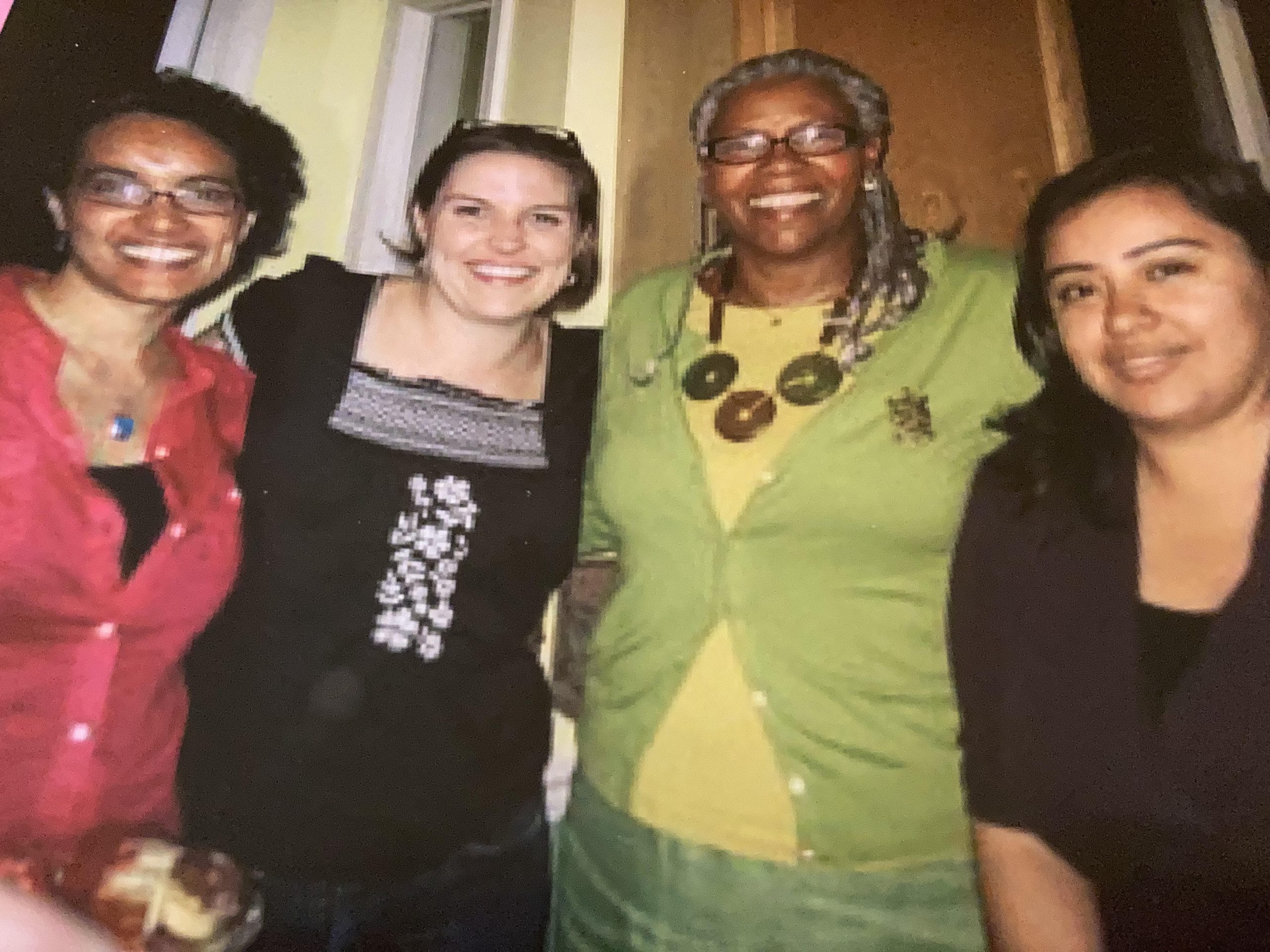 My first cohort of graduate students are now full professors, chairs of departments, deans of institutions, and tenured faculty. I lost one, Dr. Robert Carr who was instrumental as a faculty mentor to LGBTQ activists at the University of the West Indies, Mona Jamaica. There are those on tenure-track lines and those who are working as adjuncts. Others are well-established professionals in the fields of mental health and disability counseling. In addition, there are diversity officers, school administrators and secondary school teachers, a bevy of acclaimed authors, and an award -winning novelist. Many have garnered all hosts of awards accolades for their work and mentoring. When a newly published text or an email is sent to me, I relish in the words that talk about how they are mentoring others in their professions, in their organizations, and in their family lives. We all continue the tradition of helping others to be the persons they want to be.