Yarmouk was a City, not a Camp: Palestinians from Syria Confront an Unfamiliar Meaning of Palestinianness in Lebanon’s Refugee Camps 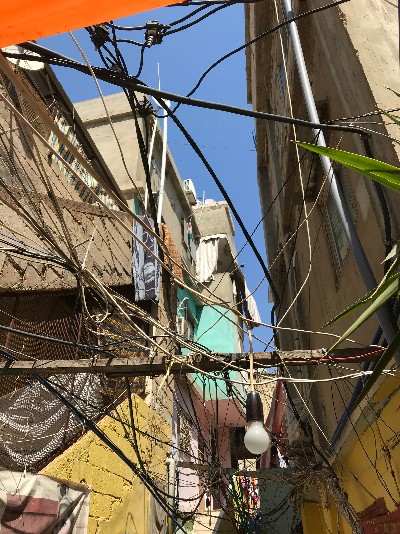 When the Burj al-Barajneh refugee camp was built in 1948 for refugees fleeing their homes and villages in Palestine, it was built on an area of about one square kilometer and was intended to house 10,000 people. When I visited in the summer of 2018 to begin my research on the situation of Palestinian refugees from Syria in Beirut, I was told that the population had reached 52,000 people. 26,000 of these are Palestinian refugees from Lebanon, 2,000 are Palestinian refugees from Syria, and the remaining 24,000 are Syrian refugees and other marginalized communities seeking affordable housing in Beirut’s southern suburbs. The borders of the camp, however, have remained the same. As a result, in the seven decades since the camp’s initial founding, its built environment has extended vertically while open spaces have all but disappeared. The alleyways between buildings are often too narrow for two people to walk side-by-side.

During my visit to this camp, I found that my unfamiliarity with these spaces made navigating them a challenge. In contrast to the camp’s residents who showed me around, I was repeatedly stumbling on the uneven ground and rapidly losing any sense of direction as we traversed the camp’s twisting alleyways. In order to ensure my balance, I quickly found that I had to constantly look down at my feet—which made finding my bearings even more of a challenge. Furthermore, I felt like I was always in the way, as scooter-riders (the only vehicle narrow enough to pass through the camp’s tight passageways) or other pedestrians would come up from behind or approach from the front as I stared at my feet in an effort to stay upright. My difficulty was compounded by my attempts to observe my surroundings and remember what my companions, who shared none of my difficulty in moving through these spaces, related about the camp and the conditions of the Palestinian and other refugees who lived within it.

In seeking to theorize how a sense of place is produced and experienced through daily practice, the geographer David Seamon proposed the concept of “place-ballet.” As Tim Cresswell explains, “a place-ballet is an evocative metaphor. It suggests that places are performed on a daily basis through people living their everyday life… It is through participating in these daily performances that we get to know a place and feel part of it. It also suggests that those who do not know the routine will appear clumsy and ‘out-of-place’ simply through the non-conformity of their bodily practice” (2015, 64). I imagine that I must have appeared clumsy and out-of-place to anyone who observed my stumbling attempt to move through these camp spaces and my failure to adequately perform their place-ballet.

For members of the community of Palestinian refugees from Syria with whom I spent last summer speaking, getting the hang of the Lebanon’s Palestinian refugee camps must have been a similarly challenging experience at first. As a result of the civil war in Syria, tens of thousands of Palestinians fled to Lebanon to find shelter amongst their co-nationals in the country. However, the experience of Palestinian refugee life that they found in Lebanon was fundamentally different from what they had been accustomed to in Syria. Palestinians in Lebanon face significant legal, political, and economic marginalization, including bans on property ownership, severe employment restrictions, and limits on other civil rights. In contrast, Palestinians in Syria before the war enjoyed near equality with their Syrian neighbors including the rights to own property, work freely, and access government services.

Most of the people I spoke to last summer came from the Yarmouk camp near Damascus, which the Assad regime and its allies reduced to rubble in 2018 in the process of reconquering the neighborhood following a five-year long siege. Yarmouk, I was told by multiple former residents, was a city, not a camp. The area was home to hundreds of thousands of Palestinians and Syrians. A young Palestinian from Yarmouk told me that, in contrast to alleyways of Burj al-Barajneh, the streets of Yarmouk were wide enough for cars and there was room for parking underneath its buildings. Navigating these narrow, twisting alleyways that characterize the crowded and densely-packed Burj al-Barajneh camp was therefore a profoundly new experience for these more recently arrived Palestinians.

In addition to encountering a new type of camp with a very different place-ballet, Palestinians from Syria have had to cope with new meanings of Palestinianness and refugeeness. In Syria, the economic integration they enjoyed meant that most only engaged with the United Nations Relief and Works Agency for Palestine Refugees (UNRWA), which has provided services to Palestinian refugees since 1949, to attend its schools and use its clinics. Now, banned from working legally, almost all Palestinians from Syria rely on direct cash transfers from UNRWA as their primary form of income (Abdulrahim and Harb 2015). And while rent in the camps can reach $300-$500, I was told, this cash aid from UNRWA does not even reach $200 per month.

This sudden reliance on humanitarian aid is part of the reason that many of the individuals I spoke with told me that they only started to feel like refugees once they came to Lebanon. Furthermore, the treatment of all Palestinians as foreigners and outsiders by the Lebanese government was also a new experience. One young woman from Yarmouk told me that having to deal with the contradictory regulations and exorbitant expenses required to renew her residency papers made her feel, for the first time, “the meaning of Palestinianness, in every sense of the term.”

But despite the difficult circumstances that Palestinians from Lebanon and Syria share, these communities have been able to cope with and challenge this marginalization. That same young woman from Yarmouk, for example, co-founded an arts and culture group in the Palestinian camp of Ain el-Hilweh near the southern city of Sidon that now includes Palestinian, Syrian and Lebanese participants. The group also gives courses and workshops that train participants in various skills. Two former participants are now working as instructors in a beauty school, having received all their training from the group’s workshops.

There is no doubt that Palestinians from Syria face numerous challenges prompted by their sudden displacement from Syria and their precarious position in Lebanon. But those challenges are only part of the story of this community’s transition to life in the country. I know there is much more to learn about this as I continue my research over the coming years.

Cite as: DeMaio, Matthew. 2019. ““Yarmouk was a City, not a Camp”: Palestinians from Syria Confront an Unfamiliar Meaning of Palestianness in Lebanon’s Refugee Camps.” American Ethnologist website, March 17, 2019. http://americanethnologist.org/features/reflections/yarmouk-was-a-city-not-a-camp.

Matthew DeMaio is a PhD student in Anthropology at the George Washington University studying the experiences of Palestinian refugees from Syria currently living in Beirut. He focuses particularly on the role of place, humanitarian practices and state structure in shaping the relations between this community and their fellow Palestinians from Lebanon.