The afterlife of unconstitutionality | Roshni Chattopadhyay

The Afterlife of Unconstitutionality: Doing ethnography among Santhal’s Majhi-Haram in Eastern India

In 2014, the Supreme Court of India ruled that no gender-related cases can be arbitrated at the village level; any assembly of this nature remains unconstitutional. 1 This judgement came following an incident in West Bengal’s Birbhum district in India, where a Santhali girl was punitively raped by twelve men—including the Majhi, or headman, of her village—on orders of a Majhi-led court. Santhals are one of the many Adivasi groups settled in eastern India, and the girl was allegedly having a relationship with a Muslim man. 2 This incident drew enormous national and international media attention highlighting the presence of “kangaroo courts,” parallel judiciary, or “salishi sabhas” among Adivasis. 3 The media portrayal gave the impression that community-initiated violence against women exists in Adivasi society because Adivasi society has not assimilated into India’s modern democratic paradigms.

To better understand how Santhals perceived the Supreme Court’s judgement regarding local arbitration, I traveled to Birbhum, the site of the case that sparked the court’s ruling. In Birbhum, which is located 155 miles north of Kolkata, Santhals live alongside caste Hindus and a large Muslim community. Inside Birbhum, every Santhali village has a traditional mode of dispute resolution, an institution called Majhi-Haram. The Majhi-Haram is typically comprised of five or six male village elders who are endorsed by the community to resolve disputes and perform rites around births, marriages, and deaths. During a dispute resolution, the Majhi will summon all parties involved in the conflict. After hearing all sides of the case, the Majhi will discuss the matter with other members of the Majhi-Haram and will issue a collective decision to resolve the dispute. The conflicting parties will then present hariya (a form of local alcohol) to the Majhi-Haram as a token of appreciation. The Majhi does not charge any fees for resolving disputes. Majhi-Haram is largely a gerontocratic institution, and the position of Majhi is mostly hereditary. The process of arbitration is mostly attended by men in the village; women are not normally part of the procedure. Majhi-Haram is therefore an assembly of people—mostly men—who come together at a particular moment around a dispute, only to be dispersed again. This constant aggregating and dispersing of people signal a rhythm that marks life in the margins (Das and Poole 2004).

Contrary to media portrayals of Adivasi society as India’s primitive order, my summer research of 2022 showed that Majhi-led courts are an intrinsic part of the life of neoliberal democracy in India. Adivasis are not on the outside of this arrangement, but are themselves stakeholders in it. My fieldwork also revealed that despite the Supreme Court’s ruling, Majhis continue to resolve disputes at the village level. This inspired me to think about the afterlife of unconstitutionality and inquire about Majhis’ political roles.

In this essay, I make two analytical interventions. First, I bring ethnographic evidence from the field to argue that Majhis operate under the auspices of the state even in contexts where the state outlaws its existence. Second, I argue that the Majhi’s role in dispute resolution need to be understood in terms of its political stakes. Here I underscore that Majhis play a tremendous role in maintaining the social organization of Santhali society, where religious minorities (including Muslims) are otherized, and where Santhali women’s mobility is surveilled and controlled. The continuity and persistence of this arrangement is supported by the economic and political developments in contemporary India. 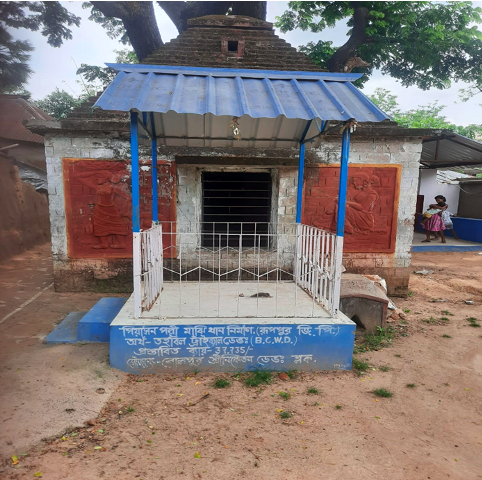 The Majhi-than is a sacred place in a Santhali village where the Majhi sits to resolve disputes, and where men gather to arbitrate. Women are not allowed to enter this space.

In Birbhum’s Santhali villages, disputes are generally mediated at the village level and are not taken to the “outside” world. The “outside” world, in turn, relies on the Majhi-Haram to adjudicate what the state views as “internal” Adivasi matters. For example, when I asked the officers who oversee government policies targeting Adivasi populations about Majhi-Haram, they noted the following: “we are aware of this institution, but we do not intervene in ‘internal’ matters of Adivasis unless something big like the 2014 incident happens.” 4

Though the 2014 incident received substantial media coverage, many of my Santhali interlocutors were not aware of the Supreme Court’s judgement. Those who were acknowledged that the 2014 incident was an exception because it involved such a spectacular form of punishment and thus brought much “shame to the community.” As one Adivasi leader explained to me, “Majhi-Haram is the most accessible institution for adjudicating conflicts for Adivasis, and the main thrust of the arbitration process is resolution between conflicting parties rather than punishment.” He explained that the Majhi-Haram is the most accessible institution for poor Santhalis who do not have recourse to formal judiciary. The leader also emphasized that the violent public shaming of women is not reflective of Santhali values but is instead indicative of the many changes that have occurred in Santhali society as it has become more integrated within the Indian state.

I spent several weeks with Majhis, asking them about how they see their role and what changes they perceive within the institution. What I discovered is that the customary authority of the Majhi-Haram is not only recognized locally, at the village level, it is also integral to the functioning of the very state authority that renders it unconstitutional. Dinesh Murmu (name changed), a Majhi from Pearson Pally, a village close to Shantiniketan town in Birbhum, offered the following: “If anybody from my village takes a matter to the local police station, the police will inquire if the matter has been discussed with the Majhi of the village before registering a case.” When I asked him about his livelihood, he shared that he works as plumber because there is no income attached to being a Majhi. He does, however, contemplate that the government should give an allowance for this role, because he is “managing the village” all by himself. Here, Murmu sees himself as a mediator between village and the state and feels that the state should compensate for his service.

One of the meetings I attended discussed the possibility of mobilizing the Majhis across villages, so that Santhali unity (Goanta) could be strengthened.

Inside Birbhum: The Mines

The government of West Bengal has recently initiated a coal mining project in Birbhum. The success of the project depends on the government’s ability to build consensus in the community regarding the transfer of land and provide compensation to the land givers. Majhis play an integral part in the local consensus-building process. As I observed during fieldwork, they may even come to be inducted into the local political parties that occupy grassroots-level government offices. Majhis, then, act as important intermediaries between the state and the village, laying the groundwork that is necessary for development projects like mining to be accepted and successful in Birbhum. Here we see the extent to which capitalist occupations like mining are mediated by Majhis, thus revealing the tactile interface between traditional institutions and the current economic order.

Santhals claim their community rights by continuing to support and take part in traditional institutions like Majhi-Haram. They also claim their citizenship rights by negotiating compensation from the government, through their Majhis, for development projects like mining, which are initiated on their lands. Where Majhis do not resist state-led neoliberal projects, they may instead play a central role in these projects. Indeed, there is a growing tendency among the community to accommodate and assimilate state values in the context of reasserting and maintaining Santhali tradition. 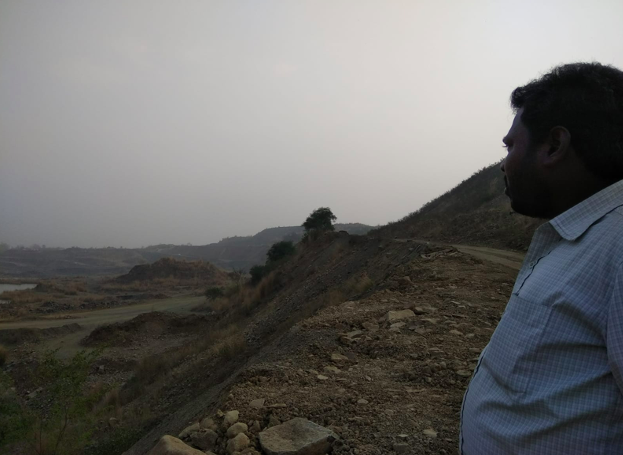 An Adivasi leader stands between the stone quarries in the Muhammed Bazar block of Birbhum district.

The present essay builds on approaches to the anthropology of the state that challenge top-down or bottom-up formulations of state-building. The Majhi’s role is to maintain local order on the local level, but also, as noted above, to serve as intermediaries between Indian state and Santhali society. As Robert Cover (1983) argued that all legal institutions exist along with a narrative that gives it meaning, I argue that to understand the everyday functioning of Santhal’s Majhi-Haram, one must understand the larger political and economic developments in India that in turn shape its narrative. In this current world, or “Nomos” as Cover (1983) calls it, Majhi-Haram is at the fulcrum of transformations in contemporary India.

My ethnographic research shows that Majhi-Haram has an afterlife despite the Supreme Court’s judgement. The Majhi-Haram not only continues to live in the shadows of the Indian state, it is crucial to its very functioning. The transformation of the Majhi-Haram as an institution means that its traditional role of overseeing and maintaining local order continues, while also informing and being informed by larger economic and political developments in India.

[2] Adivasis is a political category used by indigenous people in India. Tribe is a colonial category and is used by the government of India to classify Adivasis. To understand the transformations and development of Adivasi political identity in India, refer to Prasad (2022).

[3] Salishi is a Persian word meaning mediation. Salishi Sabhas are informal mediatory bodies without any institutional or political affiliations.

[4] The officer was in a department called “The Backward Classes Welfare Department” of West Bengal government based in the town of Suri in the Birbhum district. The department works on behalf of people belonging to “Scheduled Tribes, Scheduled Castes, and Other ‘Backward Classes’” of West Bengal. According to the department’s website: “The main aim of the Department is to improve the quality of life of these socially and economically backward classes and enhancement of capability of the people belonging to these communities, so that they can be very much part & parcel of the mainstream of the Society.”  Here “backward” signals to the socially marginalized groups who are viewed by the state as “less evolved” and at the margins of modern Indian statecraft.

I would like to thank Sourav Ghosh, Dr. Sameena Mulla and especially Dr. Katie Kilroy-Marac for their careful reading and incisive edits which sharpened this ethnographic reflection.

Das, Veena and Deborah Poole.  Anthropology in the Margins of the State. Santa Fe: School for Advanced Research Press, 2004

Roshni Chattopadhyay is currently pursuing a doctoral degree in Emory University’s Anthropology Department along with a certification from the Women’s, Gender, and Sexuality Studies Department. Her research interests are feminist ethnography, feminist theories, anthropology of law, anthropology of state and state formations, Adivasi studies and contemporary politics in India.