On Possibility: Old Age and What is Left When Living in “Hell”

“There is no possibility in this place” is something many of the people who lived in La Merced told me. This meant that, for those residents of the institution, opportunity was either absent or barely perceptible. From 2017 to 2019, I undertook ethnographic research at the La Merced shelter, a dilapidated facility lacking material and human resources to care for the approximately 350 residents who dwelled in the institution. During the 1980s, La Merced was seen as the benchmark for care of the elderly in Lima, Peru. Many people placed in La Merced their hopes of aging with security. But today, thirty-eight years later, the institution faces a dramatic period of decline due to dragged lack of funding, administrative corruption and, of course, Covid-19. Receiving precarious care, in a facility where the infrastructure is severely broken down, and in the context of a neoliberal economic model that tends to blot out these people for not being productive or self-sufficient, these older adults face the daily challenge of leading a life subjected to the regime of a vertical institution which deprives them of the ability to choose how they want to grow old and, eventually, die. Most of the people in this institution today age in the midst of anguish and desperation, and they describe La Merced as a “hell” in which they struggle to survive. 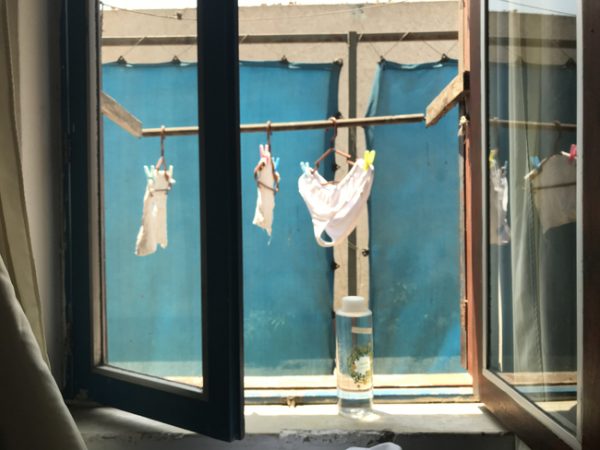 In this essay, I want to try to answer the question that Margarita, one of my interlocutors, poses at the epigraph: What is left when one is forced to inhabit “hell”? This is a question with which I was confronted on many occasions during my fieldwork. Undertaking fieldwork at that facility enabled me to see that, at that site, there existed a fraught tension between survival and possibility. Survival was an everyday exercise for many residents. However, even as they were endlessly pushed to the margins, possibility was, albeit almost imperceptible, palpable for some of these individuals, as they found a way to make their lives livable within the limits they encountered (Jackson 2011, 62)

A glimmer of hope

Many of the events Margarita witnessed every day at La Merced disheartened and demoralized her: bedridden older adults with their skeletal limbs tied to their beds without appropriate equipment, just with cloth straps; the impersonal and detached care that several burnt-out members of the staff provided to demented residents; and, a collapsed infrastructure which also collapsed her affective/emotional world. For Margarita, La Merced was a living hell because this was the corner of the world where she hopelessly aged.

Early in the fall, Margarita decided to celebrate her birthday and invited me and some friend residents to the event. She managed to get hold of a bottle of Pepsi, some crackers, and a bag of Cheetos we could all share. There, in the middle of the institution’s empty dining room, without a birthday cake, we wished her a happy birthday. She had no expectations, but her friends had a gift for her. As she excitedly unwrapped the package—a plastic bag—, she discovered a white blouse, roughly her size. The garment was somewhat worn, but from the way Margarita hugged it, it was clear to me that she treasured that gift, and that afternoon. When Margarita bade me farewell, she sealed her goodbye with words of hope: “Today was a good day. Maybe there are alternatives in this place.” Maybe, just maybe, even in that universe where she often felt like a prisoner, she could still find ways to create a pleasant moment. Could that “little hell” harbor a dim hope? 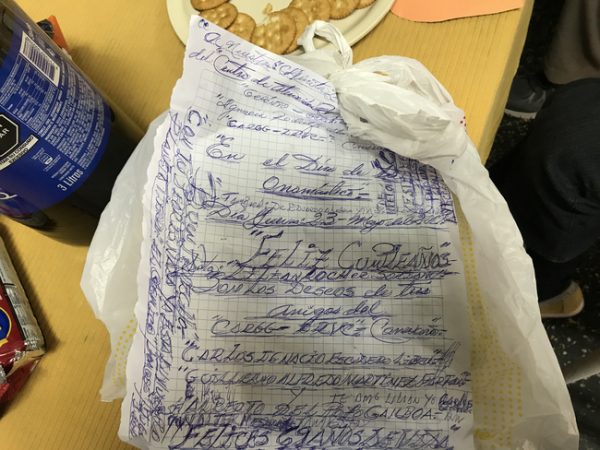 Margarita’s birthday “package”, a plastic bag due to the lack of wrapping paper

Remaining an affective being

Every time I think of someone who found something left despite living in “hell,” I think of Zoila, an affectionate older woman whom I had the chance to meet in April 2018. Zoila suffered from schizophrenia and was obsessed with finding her parents alive. Desperate for affection, Zoila endlessly sought some gesture of love that never came: a friendly conversation, a hug, a smile. Lack of affection is what defined Zoila’s place in the world; her goal, therefore, was to seek love and to give love wherever she could.

A significant part of Zoila’s personal narrative was concerned with how, as a teenager, she was young and beautiful. Now, however, she felt that everything she had once had as a young woman was lost. When I asked her about her physical decline, she told me the reason was her schizophrenia. She was perfectly aware of her diagnosis; she knew that her deterioration was a product of mental illness poorly treated.

One day, during our conversation, Zoila immediately noticed that, at the bottom of my bag, there was a tiny tube of sunblock. She gave me a mischievous look and spoke:

Zoila: Face cream! I need that for my wrinkles. I can look beautiful again with that. Magdalena: No, Zoila, this is sunblock. Zoila: Oh, Magda, can you bring me some face cream when you come again? Magdalena: Yes, sure, Zoila. Zoila: I also like lavender cologne. Could you bring me some too?

The next day, I returned to La Merced with the lavender cologne and face cream for Zoila. She was thrilled. However, she told me that she didn’t have a mirror and asked me for one. She also requested a red lipstick. “Red lipstick suits me well,” she said. So, a few days later, I returned to the institution with the things she had asked me for. As we went into her room and sat on her rickety bed, I began to take out of my backpack the objects she had requested. Immediately, without hesitation, she applied the lipstick. “I like to dress up,” she said. I asked why. She replied: “I want to look nice. Now people are going to love me because I am no longer ugly and old. If you are pretty, people come to you, you make friends.”

When I said goodbye to Zoila, she thanked me and looked at me with her childlike and luminous eyes: “Thank you, Magda. I’m very happy now.” 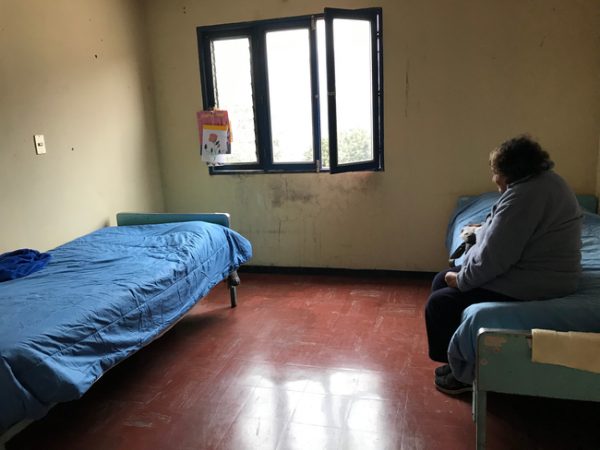 Zoila, in her room, minutes after I gave her the items she requested.

The opening up of possibility

What is left for these people in the midst of “hell”? Zoila’s existence at the institution was a visceral one. Desperate for human connection, recovering her physical beauty was the way in which she sought to feel loved once more. In her mind, beauty could restore affection, and restoring affection was key to having a meaningful life again. Recovering beauty and youth —and, in this way, remaining an affective creature even in the most desolate of scenarios— was for Zoila a way of resuming the task of living (Das and Kleinman 2001, 4). Thus, being beautiful again meant the possibility of being loved again, an opportunity for rehumanization. Here lay her chances to recreate and rework the limits of her intersubjective experience.

The words that accompany Margarita’s story are also worthy of highlighting: “Maybe there are alternatives at this place.” I have come to understand her words as the undeniable affirmation that, despite being stripped of a family, a job, or of general well-being, Margarita conserves the possibility of living as a worthy individual.

For Zoila and for Margarita it is all about the existential exercise of survival. Survival can have one eye on death, towards the realm of “no.” But in the case of these women, it is, rather, an exercise in survival with one eye fixed firmly on life, one that is closer to “yes.” In spite of their status as people on the edge of social belonging, Margarita and Zoila choose to inhabit life: they embrace possibility

What is left, then, when people are forced to dwell in a “hell”? For the people I met, the answer was not a simple “yes” or “no.” If anything, their life choices lay somewhere between learning to live within the limits of a materially precarious reality and, at the same time, struggling to transcend those obstacles. Faced with dispossessing situations, Zoila and Margarita opted to respond, despite living in a deathly environment, with life-affirming gestures that offered them a chance to live “otherwise” (Povinelli 2011): they were able to renegotiate their well-being—they were able to live, to endure— even in the midst of the improbable. In the face of a come about that seemed inexorable, for them, possibility burst into the unrelenting as a transformative, albeit subtle, event.

Update on the people of this chapter:

Zoila died from Covid-19 during the pandemic at La Merced. I hope that, in some corner of eternity, she is finally reunited with her loved ones.
Margarita continues to live at La Merced. We talk regularly on the phone because visits to La Merced are restricted these days.

Acknowledgements:This piece was made possible by financial assistance from the Ruth Landes Memorial Research Fund, a program of The Reed Foundation.

Magdalena Zegarra Chiappori is a PhD candidate at the University of Michigan, Ann Arbor. Her work is located at the intersections of old age, care, and precarity.