Content warning: This article discusses suicide, genocide, eugenics, and other forms of violence.

In Canada, it is easier to access physician-assisted suicide than it is to secure accessible housing. What sense are we to make of the fact that the Canadian government endorses the death of disabled people more readily than it provides life-affirming accommodations?Like many others, I am furious and deeply saddened by recent news of the passing of a woman named Sophia. Sophia, who had lived in the Greater Toronto Area (GTA) and had experienced severe disability from environmental illness, chose medical assistance in dying (MAiD) last month. Her living conditions made her life unlivable. Sophia tried and failed over many years to secure accessible social housing. Months before her death, clinicians had written to government officials on her behalf, to lend their medical expertise in support of her case. They received no response. Sophia’s friends had likewise created a GoFundMe campaign to support her efforts. Unfortunately, none of these actions were able to save her.

Housing and disability advocates know that environmental illnesses are often chronic, resulting from the cumulative impacts of unevenly distributed exposures. They also know that accessible living environments are a first step toward recovery. Sophia’s appeals for safe housing were repeatedly denied and yet her death was legally endorsed. How are we to understand this as anything less than state-sponsored eugenics?

The decision to approve Sophia’s MAiD request sends the message that disabled lives are valued less than the cost of providing accessible and affordable housing. Sophia had spent several years isolated in a sealed single-bedroom apartment with no heat or air conditioning. Still, the view of the nonprofit housing providers who managed Sophia’s building might have been that her living space was “accessible,” because on paper, renovating the room and sealing the vents partially mitigated her chemical sensitivities to the incessant cigarette and weed smoke that plagued the building. Extreme isolation was deemed an adequate accessibility support. No one should have to live that way, sealed in like that.

As an advocate and anthropologist who has spent several years working with people who live with chemical sensitivities and environmental illness in the GTA, I know that many more people do live like that. Exposure leads to many people experiencing chemical sensitivities and other kinds of atmospherically-linked environmental illnesses like asthma and migraines. For renters, the likelihood of not being able to leave an inaccessible home is exacerbated by the city’s severe lack of affordable housing, revealing a deeply classed double standard. Exposure and its effects are classed and ableist; they are also gendered and racialized. 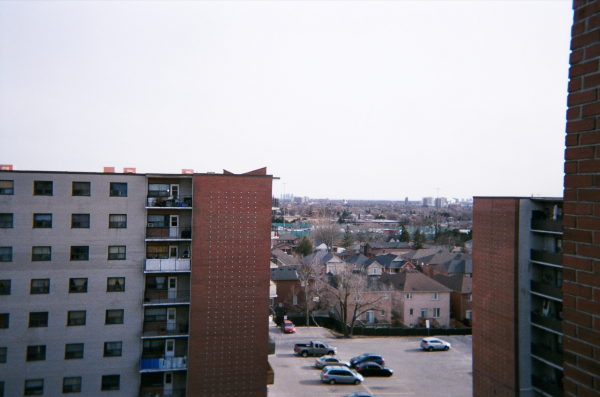 In April 2018, I facilitated a creative workshop for women with MCS. During these workshops, participants used disposable cameras to take photos of their everyday lives and to visually represent how they navigated shared chemical atmospheres. This photo, taken by a participant named Karen and used with permission, shows the inaccessible apartment building she calls home in the GTA.

The province currently recognizes MCS (Multiple Chemical Sensitivity) as a disability under the Ontario Human Rights Commission. Legally meeting only the lowest of environmental health standards in rental housing, however, is not enough. Since when has the possibility of a thriving life been defined against such a clinically austere and cruel legal bare minimum?

There are no dedicated public funds to treat MCS in Ontario, despite hundreds of thousands of people needing similar kinds of medical care and disability support. Though the provincially-funded Environmental Health Clinic at Women’s College Hospital in Toronto has the ability to assess and provide diagnoses to patients, it does not have the jurisdiction to treat environmental illness. It takes people around 18 months to even get an appointment. As I observed while conducting fieldwork at the clinic from 2017-2019, many patients had already lost their jobs and secure housing by the time they finally got an appointment. A ministry-appointed Provincial Taskforce for Environmental Health was formed in 2016 with the intention of establishing accessible government-funded MCS treatment and follow-up care, but no major policy changes have come of their recommendations thus far. Changes are needed soon, as in Toronto, the meager economic assistance offered to disabled people comes nowhere close to matching the cost of living. Ontario Disability Support Program (ODSP) can get someone rental housing or food, but not both. Shelter and food allowance is $1169, but the average cost of a bachelor apartment is $1211.

MAiD can provide a dignified death for people with terminal illnesses, and Canada is one of the first countries to offer MAiD for people whose illness is not terminal. The eligibility criteria for MAiD were expanded in May 2021 to include environmental illness, and other non-terminal conditions. However, Canada does not have a great track record when it comes to laws which directly or indirectly promote death among marginalized populations. The ongoing genocide of Indigenous peoples, including justice for MMIWG2S is at the forefront of my mind, as is the forced sterilization of thousands of people in British Columbia and Alberta, many of whom were racialized and/or lived with disabilities and chronic illness. Across Canada, 7,224 people died from drug overdose in the first year of the pandemic, and 64 people were shot by law enforcement in 2021. In Toronto alone, more than 200 unhoused individuals died in 2021. All of these struggles kill thousands of Canadians, and are connected by unjust, patriarchal, and white supremacist state systems.

Perhaps by choosing death, Sophia refused the long-term consequences of environmental chemical exposure, failed accommodations, and the chronicity of oppression. We must think about the expanded eligibility of MAiD in Canada to include non-terminal conditions alongside laws and policies that legalize multiple intersecting kinds of ecological slow violence. Ameeriar (2012) describes a sensory context of neoliberal multiculturalism as disciplining racialized smells into a “sanitized sensorium” for women immigrant’s inclusion in Toronto’s public sphere. Sensoriums are also sanitized when it comes to the denial and questioning of people’s abilities to sense atmospheric chemicals. Illnesses caused by the petrochemically-based volatile organic compounds (VOCs) found in everyday products like fragrances, cleaners, second-hand smoke, car exhaust, and renovation products are inseparable from petrochemical and petroleum infrastructures in Canada, and wider global networks of petrochemical consumer products. Approached from a disability justice perspective, MCS may, in fact, be viewed as a crip capacity for sensing petrochemicals, an important source of knowledge about their effects and consequences that can align with multiple justice movements. Sophia’s story needs to be part of a broader conversation about “toxic late liberalism” (Povinelli 2021), how the Canadian settler colonial state, beyond “body-centric narratives of harm,” structures exposures to toxic chemicals which disproportionally effect Black, Brown, and Indigenous communities (Murphy and Shaadan 2021). An ethical framework for environmental illness needs to center another fundamental principle of disability justice—that both disability and accessibility are relationally produced (Sins Invalid 2016). Feminist scholars and advocates remind us that relational accountability is built from the ground up, and the same goes for the relationalities of disabled ecologies, and ecological disablement (Taylor 2021).

Screengrab from my 2021 film Atmospheres, which speculatively follows petrochemicals in Toronto across the supply chain, from oil refineries to a household hazardous waste drop-off program. Pictured here are used aerosol cans from the program, representing but a few of the many chemicals that make atmospheres inaccessible for people with MCS. To view visit: https://crosscuts.se/atmospheres/

How to reconcile what, on the surface, may present itself as a compassionate liberal policy that supports progressive ethics about death, agency, and autonomy with its simultaneous replication of eugenics programs and their results? Sophia related to her own death as a kind of “activism” to support the cause of broader patient communities. But what if MAiD, as an emergent technoscientific medical procedure that alleviates individual suffering by allowing people to end their own lives, actually contributes to the erasure of structural oppression rather than addressing it head-on?

A flawed humanism undergirds liberal human rights ideals (Fritsch and McGuire 2019; Jobson 2020). Beneath what Trouillot (2000) calls North Atlantic liberal humanism is the false ascription of a universal subject who can choose. Living in poverty and faced with a disabling illness, and without accommodations, resources, or proper medical treatment, Sophia chose state-sponsored death. That a progressive ethics of “choice” may in fact lead to eugenicist outcomes is a truly terrifying proposition. The potential consequences of this combination need to be addressed with haste, lest MCS communities “framed outside of history—except of course the history of the encounter on which the apology is premised” encounter MAiD as the literally morbid technoscientific embodiment of an abortive ritual—the Canadian state’s apology for its multiple intersecting oppressions (Trouillot 2000, 181).

Sophia Jaworski is a PhD candidate at the University of Toronto. Her work is located at the intersections of feminist STS and anthropological approaches to petrochemicals and environmental knowledge production, and atmospheric disability justice.