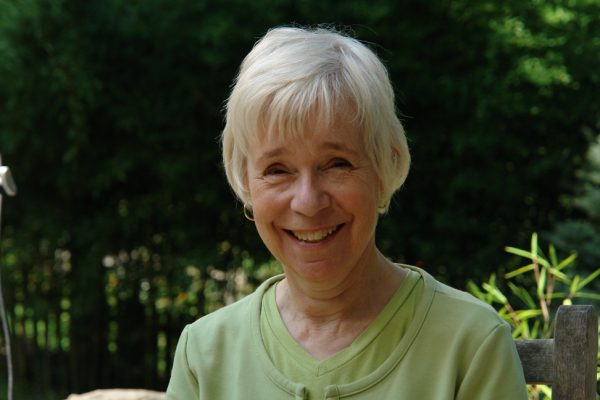 During the penultimate day of the 117th Annual Meeting of the American Anthropological Association, Professor Emily Martin delivered the biannual Distinguished Lecture to a well-packed and attentive audience. Her words left me, and many other attendees, inspired to re-examine not only what cultural anthropology is, but also how anthropologists must engage with the public. As previous Distinguished Lecturer Rayna Rapp expressed in her opening statement, Emily Martin needs no introduction. Authoring six books and more than 100 articles, Martin has pioneered the uniting of feminist and critical analysis, as well as ethnographic investigations into North American social life. Her ongoing search for metaphor, history, and power have dramatically reframed technoscience, reproduction, the immune system, and psychology. In 2008, Martin founded Anthropology Now, providing accessible and wide-ranging publications on timely anthropological issues. Throughout her career, Martin has also prioritized teamwork, undertaking mentoring and collaborative fieldwork initiatives. This essay will unpack the core messages of Martin’s Distinguished Lecture, followed by a reflection on her advice for how anthropologists may live through contemporary times of crisis.

Entitled “Playing with Fire: Imagining Anthropology and Science,” Martin’s Distinguished Lecture metaphorically rethinks the 2018 AAA conference theme, “Change in the Anthropological Imagination.” Here, she employs the figure of “fire” to visualize interconnections between two central dimensions of contemporary social life: the “inextricable mix of destructive and creative energy in fire, a mix that is ubiquitous and never still.” Fire is at once productive and enabling, as well as potentially violent and degrading. Martin’s metaphorical engagement with fire ignites a novel envisioning of “science” in that by consuming what comes before it, science opens the possibility of creating new ideas and knowledges. The figure of fire is an invitation to “consume” or move beyond previous anthropological understandings of culture, such as a web, a structure, a quilt, or a rhizome. In contrast, attention to fire amplifies the current conditions of social life, while also clarifying the discipline’s relationship to science. Anthropology is indeed a science—in the Presocratic sense. It harbours an “expansive spirit,” bringing forth perspectives that enable ongoing knowledge-producing movements of creation and destruction.

Getting hooked on anthropology

Martin found herself drawn to cultural anthropology for its potential to ignite understanding. Prior to being a disciplinary category, Martin characterizes cultural anthropology as involving the experience whereby “something incomprehensible becomes interesting and comprehensible.” As she shared with the audience, Martin’s first step towards this expansive mode of understanding social life began with her grandmother. She was a beacon of feminism, using her husband’s social capital to become the hostess of a daily TV cooking show that regularly aired on WABT in Birmingham, Alabama. She created canned-food recipes that, while out of fashion now, were modern and progressive at the time. Yet, like a fire, there were destructive aspects to her grandmother’s social position. While full of creative energy—politically progressive and speaking for herself—she was also an older southern woman, participating in the circulation of racist discourses.

Martin’s second step towards cultural anthropology took place at the University of Michigan. There, she was taught to play Japanese instruments by William P. Malm. At first, Noh, Kabuki, or Shinto music did not sound like music at all to her; it was all incomprehensible. Malm then explained the underpinning principles guiding Kabuki: instead of European metronomes, Japanese rubber bands would expand and contract for measurement. With this expanded understanding came a recognition of the music’s beauty. By moving from incomprehensibility towards understanding, Martin had one of her first epiphanies about the practice of cultural anthropology.

Alongside these instances of inspiration, Martin witnessed destructive forces at work. She applied to the graduate program in anthropology at Cornell, hoping to study Japan under Robert K. Smith. There, she had her first lesson in feminism. After finding out she was unexpectedly rejected from the program, so traveled to Ithaca anyway, asking to meet the department’s graduate secretary. On her application, she found the rejection rationale written by hand: “She says she is getting married in the spring, so she probably wouldn’t come anyway…” Since she had in fact appeared, Martin was given a place and financial support, though—due to supervisor availability—with the caveat to study China rather than Japan. Throughout her graduate studies in the late 1960s, an earth-shaking appearance of feminism began to quake inside anthropology, reworking gendered barriers and mobilities. Referring to the works of Rayna Rapp, Margery Wolf, Louise Lamphere, and many others, Martin pinpointed the development of anthropology’s creative force of fire at the time: “a huge grassroots movement was catching fire and spreading. It was burning out old structures, encouraging new ones to grow in the ashes.”

Martin’s movement toward examining North American culture was sparked by noticing a consistent feature of its cultural landscape: a persistent willingness to categorize human beings into different kinds of people—at times according to overt narratives of science. Martin quoted Alexander Weheliye: “the violence, subjection, exploitation, and racialization that define the modern human” at least in the United States are “processes that discipline humanity into full humans, not-quite-humans, and nonhumans.” By employing hierarchizing categories shot through with the heritage of Darwinian thought, the scientific method is not politically neutral. Rather, Martin contended, it holds potential to be a fiery and destructive institution at the same time that it is widely accepted as the gateway to truth and experimental results. Encapsulating a fire-like force, science may invoke destructive tendencies, as well as hold productive capacities to strategically structure new forms of life.

Gender, racialization, and state power as they intertwine with narratives of science were the siren calls for Martin to ethnographically shift toward North America. Since then, her work has been oriented toward a set of questions: “If cultural anthropology is a science, how can it study “science” instead of simply producing science? If cultural anthropology is not a science, what could it possibly say about the scientific method?” The title of Martin’s Distinguished Lecture—”Playing with Fire: Imagining Anthropology and Science”—provides a valuable frame to answer these questions. Cultural anthropology can blaze a trail for the study of “science” and the “scientific method” by critically tracing how, as with the spreading of fire, destructive and creative forces unite in the ongoing co-creation of social life. The study of science became especially heated a few years ago, Martin recalled, when a fire storm erupted over the AAA decision to remove the word “science” in a few places from its long-term mission plan. Hence, science is creative, destructive, and expansive—all at once.

Martin mapped out two ways in which anthropological studies are scientific, generating new knowledge about the destructive and creative forces at work within social life. First, looking toward the world of Presocratic philosophy, anthropology holds the inherent ability to surprise. An “expansive spirit” initiated the making of the scientific method, and has not been extinguished by cultural anthropologists: “For the Presocratics {…}, there was as yet no systematic method, no formal method of inquiry. Nonetheless, they were wondering about what makes the world work.” Presocratics held a burning curiosity to ask questions and envision how things came to be as they are. According to Martin, this Presocratic practice of wonder for a reality underneath appearance was not only revolutionary. It may also be still subtly found in today’s laboratories—before findings become solidified into scientific proclamations. As with other scientists, anthropologists are good at surprises because the discipline’s defining method of participant observation requires an “expansive” attention to the minutia of social life. According to Martin, participant observation fosters an “emotionally cathected kind of relationship with its subjects,” motivating a burning curiosity to ask questions in a mode akin to Presocratric philosophers. Despite its disciplinary origins in the natural history tradition, anthropologists characteristically take the intentions of those observed into account in an ongoing reciprocal relationship between scientist and subject. Through this process, anthropologists are animated by an “expansive spirit,” attuned to the surprise of the unexpected.

Second, anthropology has the capacity to recognize failure and correct it. When Martin published Bipolar Expeditions, her goal was to show that on the one hand, “irrational” mania has the rationality of the market in it, in the form of what she termed the energetic entrepreneur. On the other hand, she demonstrated how the “rational” capitalist market needs an “irrational,” emotional manic “spirit” in order to fuel its relentless acquisitiveness toward wealth without regard for the welfare of anyone else. In hindsight, Martin recognized she missed a chance to offer an important social critique: “when the ‘rational’ goals of the market are paired with ‘irrational’ emotional rhetoric, as is happening in the Trump White House, we are on the road to fascism.” In other words, Martin recognized a failure in not fully insisting there are forms of high emotional energy that are social to their core. The sociality that is characteristic of manic states is indeed very different from the narcissistic drive to aggrandize one’s own wealth. Driven by the scientific spirit of correction, Martin’s next project has ethnographically examined the centrality of the concept of the “individual” for modern capitalism, undertaking long-term research on experimental psychology.

Returning to the conference theme, “Change in the Anthropological Imagination,” Martin offered three practical and immediate steps necessary for cultivating change in cultural anthropology’s placement in the world. First, change must happen in terms of genre. Rather than focusing on the written academic text, we must produce anthropology through varied avenues. These may take the form of graphic novels like Lissa by Sherine Hamdy and Coleman Nye, literary fiction like In the Garden of the Fugitives by Ceridwen Dovey, poems like those in The Chasers by Renato Rosaldo, as well as art, video games, memoirs, magazines, blogs, websites, and ethnographic films. The medium of anthropology must consistently be opened up to spread the messages of surprise and correction.

Second, education needs to move beyond collections of factoids to be memorized. It must involve changing deeply embedded values or ways of devaluing others. To bring the powerful methods and deep knowledge of anthropology into the curriculum, Martin refers to the effort of MACOS: Man, A Course of Study, introduced in the 1960s for five or so years within the 5-6th grade curriculum. While critics derided it as teaching socialism, there was value in it. For example, children studied and enacted how Netsilik hunters shared seal meat instead of keeping it all to themselves. Like anthropology, the aim was to create positive emotional valence for a more open worldview. Third, anthropologists must extend education beyond school halls, toward uncovering everyday structures of capitalism. Anthropologists must use their strong voices to make visible disparities, publicly demonstrating the structural workings behind their production.

To find inspiration for approaching contemporary converging crises, Martin offered a quote by Michelle Alexander: “A new nation is struggling to be born, a multiracial, multiethnic, multifaith, egalitarian democracy in which every life and every voice truly matters. In recent years, [she continued] we’ve seen glimpses of this new nation at Standing Rock, in the streets of Ferguson, in the eyes of the Dreamers, in the voices of teenagers from Parkland and Chicago, as well as at LGBT pride celebrations, the Women’s March and the camps of Occupy Wall Street. Confederate statues are coming down as new memorials and statues are going up in Montgomery, Alabama, and beyond, honoring victims of lynching as well as the courageous souls who fought for the abolition of slavery and the end of Jim Crow.”

Building on Alexander’s call for change, Martin urged contemporary anthropologists to maintain a fiery presence—not a cozy campfire presence but an incandescent, searing bonfire presence—in collective actions and in public media. For so long, anthropologists have identified and charted alternative visions of human purpose. Now, there is a different responsibility: “it is time to shout them from the rooftops.”