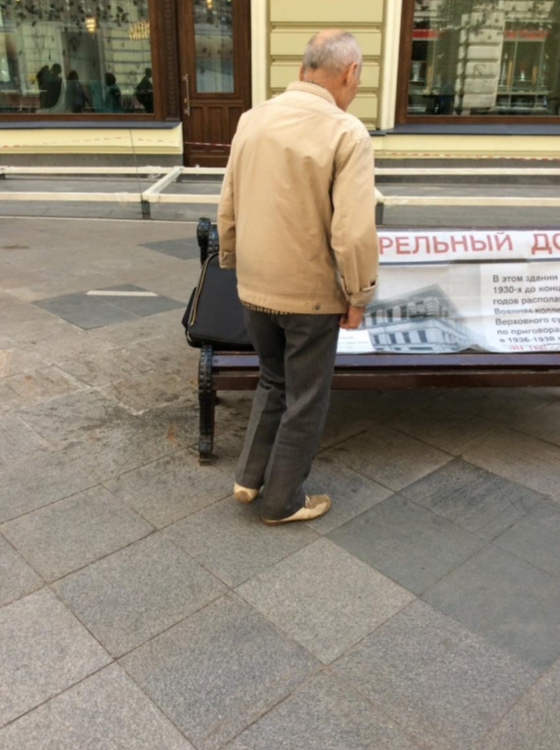 A man placing a banner in the centre of Moscow with an image of a house and a caption “Execution ‘Hit’ House” (rasstrelnii dom). (Galina Oustinova-Stjepanovic.)

On Monday morning in May 2018, an old man stretched a banner with an image of a house and a caption “Execution ‘Hit’ House” (rasstrelnii dom). He placed it on a bench opposite a former residence of the Soviet Military Court in central Moscow. The caption on the banner stated that the Military Court of the Soviet Union convicted and executed thousands of people in the basement of the building in the period between 1930s and late 1940s. Behind the old man, the original building was concealed by scaffolding and festooned with fairy lights. The notice board on the building mentioned that the building was undergoing emergency restoration work, that it was the seat of the Moscow Guilds and of the Military Court, but it did not speak of executions. The contrast between the two versions of the same story was stark.

The old man had barely finished smoothing the corners of the banner and zipping his handbag, when two police officers asked him to put it away and follow them to a local police station. The old man did what he was told, slowly, cheerfully, comfortable with the police presence. I stepped forward to ask why he was being arrested and the police officers started apologizing profusely. Yes, solitary protest is permitted, they explained, but this freedom had been temporarily suspended on the eve of the 2018 FIFA world championship.

The old man handed me a photocopied piece of paper that explained that he protested against the rehabilitation of Stalin whose portraits are common in souvenir shops, on mugs, pencil cases, and T-shirts. The paper mentioned his name, Nikifor Alexandrovich (not real) and a mobile phone number. Subsequently, we met many times by design and accidently at different events to remember the horror of the Stalinist past and its legacy. Nikifor Alexandrovich’s family history motivated his dissent. His father was arrested and killed during the 1930s purge, and his mother later shrouded the events in silence. He was compensated financially when his father was rehabilitated after the death of Stalin. He built a career as an engineer, got married, and has many grandchildren. Nikifor Alexandrovich’s family tragedy legitimizes and provides a publicly acceptable explanation for his dissent. However, he was reprimanded for his solitary protest going public because it threatened to fuel discord among Russian citizens as the memory of Stalin’s crimes and achievements divides public opinion.

Nikifor Alexandrovich’s small-scale public protest has many prototypes in Soviet Russian history. One example is the legendary protest of seven dissidents at the Red Square in August 1968. Having unfurled little banners stating “For your freedom, and mine,” speaking against the Warsaw Pact invasion of Czechoslovakia in 1968, the seven dissidents were arrested in a flash, tried, and sent into prisons and psychiatric hospitals (Gorbanevskaya 2017[1969]). While protesting against a historico-political injustice, affective ties with other dissidents, friends, relatives, lovers, and political prisoners provided the courage and impulse for greater involvement in dissident support networks that offered accommodation, money, childcare, and so on (Orlov 2017). Those networks marked an intimate circle of like-minded people. Yet, dissent had also cut them off from disapproving family members, colleagues, the Communist party-state, and other Soviet people. Ambiguously, dissent was classed by the prosecution and psychiatric experts as a double disloyalty, both to the closest kin and to a broader anonymous collective of Soviet people.

Dissent has resonance in intimate relations with close people, which facilitates and impedes its possibilities. But in the above examples, what do people dissent from? Frequently, dissent is directed at concrete localized issues and concrete people. But dissent might also effectuate a move away from the immediacy of things and an orientation toward an asubjective whole. In 1968, dissidents spoke of their efforts to split away from the presumed unity of thought of the Soviet people, who allegedly spoke in a unanimous voice. The effort was to become estranged from a larger collective and the state (Reich 2018, 20), to find a position outside the normative totality. Today, Nikifor Alexandrovich argues against a common notion that his life and activism undermine territorial and human “unity,” or edinstvo, in Russia. For instance, the ruling party of unity, Putin’s United Russia (Edinaya Rossiya), presides over the unity of the people(s) of Russia, celebrated on the Unity Day on November 4th. Interestingly, in the past and today, political actions are presented as a calling card for membership in moral humanity.

Edinstvo has featured as an enduring trope in Russian political imaginary. It is more than a technology of governing that attempts to contain something that appears prone to diverging and moving away. The idea of unity is inscribed into a politico-ethical order that insists on intimacy with an abstract totality of all, beyond any felt relations. A more accurate translation of edinstvo conveys a sense of “oneness.” It is predicated on a peculiar arithmetic that not only defines dissent as estrangement, but also quantifies it as a relationship of many-to-one identity, a relationship that joins a multiplicity of things without merging them into an undifferentiated totality (Baxter 1988; Badiou 2008). In contrast to a familiar administrative count of census and voting where one person stands for a natural number (one, two, and so on), edinstvo operates in a different conceptual framework where one as totality is the biggest number that subsumes any infinite number within it. According to this politico-mathematical logic, dissent constitutes an act of subtraction from the unity of one. It also means that dissent is stymied on a deeper relational level of the presumed total intimacy with the many than enacted through oppositional politics.

Cite as
Oustinaova-Stejpanovic, Galina. 2019. “One is the Biggest Number: Dissent as Estrangement from Totality.” In Tobias Kelly, ed., “The Intimacy of Dissent,” American Ethnologist website, April 15, 2019. http://americanethnologist.org/features/collections/the-intimacy-of-dissent/one-is-the-biggest-number.

Galina Oustinova-Stejpanovic is a Senior Researcher at the School of Social and Political Science at the University of Edinburgh.