I could not write.

I would get back to my apartment in the center of San Pedro Sula, and I could not write. I would pull my little red-orange hatchback up to the portón, thinking about the conversations I’d had that day. I would get out, unlock the big doors, swing them back and gingerly drive into my narrow parking space while replaying important moments in my mind. I’d walk back, re-close and re-lock the portón, and then hike up the flight of stairs to my second story apartment, remembering the way the air felt, smelled. I’d get inside, sit down, and I could not write.

I was always a moderately disorganized but devoted note-taker. Even before officially becoming an anthropologist, I always had a notebook with me; I always jotted down reflections, thoughts, questions, ideas. I had multiple notebooks and no real system for what anything meant but everything I saw was in there, somewhere. As a research fellow in Mexico, before I started a doctoral program, I would dutifully turn my handwritten notes into Evernote entries, tagging each entry with relevant keywords, creating an archive for myself that I could navigate later. When I began fieldwork for my doctoral dissertation in Honduras, then, I was dismayed to find I was unable to write. Dismayed and embarrassed. Was I even doing fieldwork if I didn’t have the fieldnotes to document it all? How would any of this turn into a dissertation later if I couldn’t fill all the Moleskine notebooks I had dutifully brought with me to Honduras?

Perhaps it was the newness of the place and the experience or the overwhelming of the senses that froze my hands. But I was not new at fieldwork. Maybe it was the heat, the stifling evening air in my un-air-conditioned living room, that caused the brain fog that inevitably came with getting home and opening up the laptop.

More likely, though, it was the heaviness of the work. I was in Honduras to research the situation that young people found themselves in after being deported to neighborhoods with exceptionally high incidence of violence. I was asking how they navigated daily life in a city and country that ranks among the most dangerous in the world, and how they managed being expelled from the US (or Mexico) after trying to seek safety. There was a lot of death, violent death, circling around us. An intense structural violence set the backdrop for this context. Violence was everywhere, on the tips of people’s tongues, lurking outside their doors, hanging over their neighborhoods like the storm clouds that would gather during the rainy season, threatening to drown the city.

I could not write.

After fighting with myself for a few months, I gave up trying to force myself into my old habits of fieldnote-taking. Instead, I started recording my voice. As soon as I left someone’s home, or a meeting, or an encounter, as soon as I climbed back into my little hatchback, I would turn on my voice recorder—or often my cell phone––and narrate to myself whatever had just transpired. I still carried a notebook with me; I would jot things down occasionally. These voice notes to myself, however, turned into the real substance of my fieldnotes. 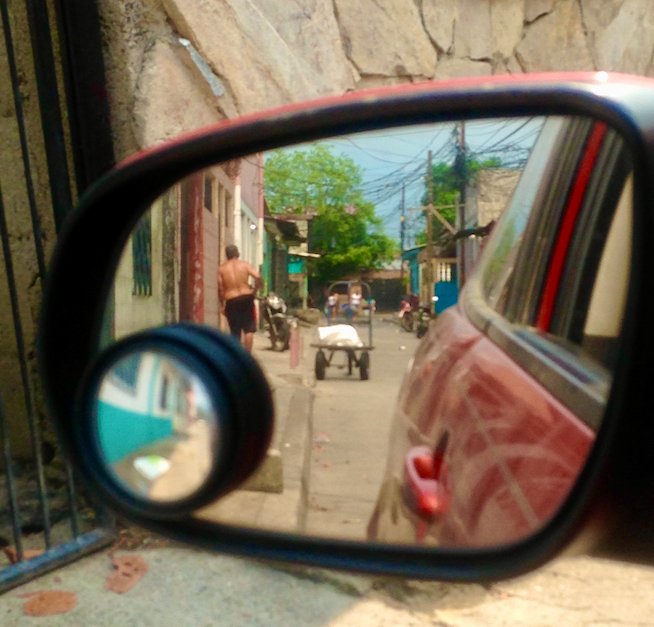 It took me more than a year after leaving the field to listen to my voice notes, to transcribe them, to turn them into text. When I did, I found that I had the whole world of the field recorded. My thoughts, my reflections, were punctuated by the ding, ding, ding of the car telling me to put my seatbelt on. Ozuna and Bad Bunny songs on the radio break the heaviness of my long silences, the reggaetón of the day adding levity and texture to my recounting of conversations and sensations. The teenage window washers and orange sellers at the intersections are kind and gracious when I hear myself call them “mi amor,” like the doña I am in that context, and apologize for not having any cash on me. I hear myself tell one it gives me pena, embarrassment, shame. “No se preocupe, para la próxima mami.” The characteristic mix of formality and informality elegantly recorded in that one sentence.

I hear my voice change as time goes on. I hear how tired I sound, how worn, how worried. I also hear my Spanish change. I take on the j in place of the s that is particular to San Pedro Sula’s urban margins. I drop octaves as I recount the conversations with young, gang-affiliated men, approximating their manner of speech, their turn of phrase.

After leaving Honduras, it took me a long time to be able to listen to all my recordings—both of myself and the interviews I had done. But once I did, when I could, the voice notes revealed so much more to me than the written notes I managed to take. They included the texture of the moment, the music, my voice. The ambient sounds reverberated in my words, animated the recordings, and sparked memories, emotions, and thoughts that would have been flattened in my notebooks.

Anthropology is always filtered. We’ve come to understand and accept, collectively, that we do not hold an objective lens that communicates the world as it is onto the page. We understand what we learn through our experiences, our positionality, and, I think, our way of recording. In the space between my brain and my hand, filtering occurred. I would order my thoughts as I turned them into text, either in a notebook or directly onto the digital page. And, surely, as I spoke out loud in the cocoon of my car, I also engaged in a process of organizational filtering, choosing some words and moments to record over others. But my voice is punctuated by heavy sighs, by reprimanding myself for missing a turn, by yelling Spanish profanities at other drivers (with the windows closed, of course). There is a rawness to these fieldnotes that my written versions never have. There is an honesty to them; they retain a sense of the difficulties of fieldwork, the frenetic, hectic pace I kept, the insecurities I felt as to whether anything I was noting down would matter, would make sense, would ever amount to anything at all.

Transcribing myself later, alongside my interviews, is more work, undoubtedly, than sorting through my tagged Evernote files, but the richness I found there was unparalleled. The voice notes offered another layer of data, the retention of something ephemeral that I had been unable to capture by hand (or keyboard).

And every time I listen to them and hear Taki Taki play in the background, I am transported back to the heat, to the sun, to the smell of San Pedro Sula, to the coolness of the air-conditioned car, to the relief I felt to get a moment’s respite as the beads dried on my perpetually sweaty face, to the pride I felt at learning how to navigate the city’s streets and unmarked neighborhoods, to the dread I felt at having to leave when I was only just getting to understand some things. When I hear the ding ding ding of the car, reminding me to put on my seatbelt yet again, as I drive across the Sula Valley and record my voice, I remember what it felt like to sit with one young man who was at his breaking point, holding back tears, still wearing the shoes he’d been given in detention. As I hear myself talk about him, and his shoes, as the radio plays in the background, I remember how to write.

Amelia Frank-Vitale is a Postdoctoral Research Associate and Lecturer in Princeton University’s Program in Latin American Studies. An anthropologist, she studies migration, deportation, violence, and survival in Mexico and Honduras. Her work has been published in Geopolitics, The Journal of Latin American and Caribbean Anthropology, Public Anthropologist, The Annals of Anthropological Practice, and NACLA: Report on the Americas.