Mobilizing words and cultivating change: Taking notes during the pandemic strikes in Colombia

After months of a seemingly endless pandemic, delayed plans, and many hesitations, I was finally able to begin my dissertation fieldwork in May 2021. I had spent countless hours longing to start research and imagining my days in the field, but little did I anticipate what my writing routine would look like. As an anthropology student, I was used to receiving thorough advice on issues related to ethics and safety in the field, yet it seemed that the intricacies of ethnographic writing were either too obvious or too personal to be part of any academic training. I thus came to think that writing fieldnotes was an individual and intimate task I would intuitively develop on my own at some point, while “being there” in my research site. Unlike many others who found relief in writing “pandemic diaries” during the lockdown, I decided to use most of my time in isolation reading, attending webinars, or going for long walks. I would have liked to have documented how I spent my days at home and practiced narrative techniques that I could have employed in the field. Unfortunately, the overflow of information about the pandemic and the uncertainty about my research paralyzed me during my COVID-19 confinement. And so it was that I set off for Colombia with only a vague memory of the preliminary fieldwork I had carried out during the summer of 2019, and feeling relatively estranged from the practice of writing. I never imagined that this writing silence would subside and evolve into the polyphonic ethnographic journey that defined my fieldwork experience.

When I arrived in Popayan, my main research site and the capital of the southwestern department of Cauca, the writing paralysis swiftly faded away. The country was experiencing one of the most violent episodes of social unrest in recent history, with protests taking place daily. The pandemic-induced economic recession and the unmet promises of the 2016 Peace Agreements were topped by a set of unpopular tax reforms, which the government had announced in a rather inept fashion. The situation released an explosion of protests. I had planned to work with impoverished peasants who cultivate coca (an ancestral native plant and the raw material to produce cocaine) in rural communities near Popayan. I intended to follow their everyday agrarian practices of resistance to the “War on Drugs”1 and their struggles for political recognition as a distinct peasant culture. However, upon arrival, I found that many of my research participants had left their farms and daily routines to join different peasant organizations in an empty urban school that leaders had borrowed to congregate protesters. This sustained a state of permanent mobilization that lasted around three months. The national scope and restless prolongation of these “pandemic strikes” and, thus, the sensation of experiencing an unprecedented event in Colombian history, stimulated my eagerness to document everything I saw. Without much orientation or dexterity, I was pulled into the practice of everyday journaling.

Most of the time, writing occurred at night and in the privacy of my home. I was still a foreign interloper to many of the peasant activists I wanted to understand. Because of the government’s ongoing violence and persecution of these social leaders, I needed to make an extra effort to make them feel comfortable with my presence, so I initially decided not to make written records of what I saw or heard. Besides, during the day, I was too immersed in social mobilizations. I was listening, observing, and trying to make sense of what was going on. My deepest concern was to construct and strengthen my collaborative relationships with this peasant community, especially after almost two years of pandemic absence.

Through fellow anthropologists and activists, I had become familiar with participatory approaches to knowledge production developed by Colombian intellectuals, mainly expressed in the groundbreaking work of Orlando Fals Borda (1998) and the legacy of the revolutionary thought and action of Camilo Torres (1970). From them, I learned about the transformative potential of the co-production of knowledge and the obligation to return this knowledge to the communities. How could my fieldnotes set the stage for building a liberatory social science capable of responding to my interlocutors’ long-lasting demands for justice? In what ways could the practice of writing facilitate the kind of reciprocal learning between participants and researchers that Fals Borda imagined? 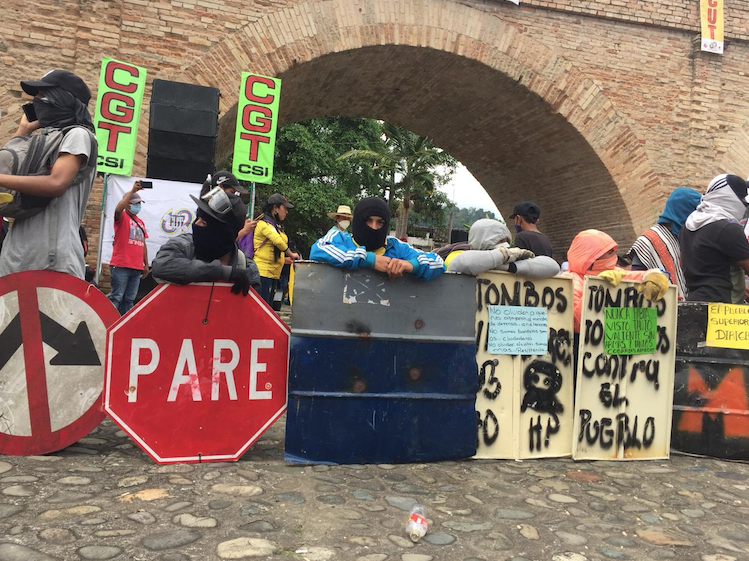 Initially, I was far from providing an answer. My first journal entries were frenetic accounts of events and chaotic descriptions of characters. Rather than providing a systematic narration of what was happening, they hosted an outpouring of disorganized anecdotes. Impregnated with surprise and bewilderment, my early notes expressed an anxious obstinacy for remembering moments, conversations, and reflections that I’d had throughout the day. Yet everyday journaling in my mother tongue also felt incredibly comforting and healing. After a long stay in the US, I had become rather bashful about my writing abilities. I grew overly conscious of my language mistakes and became used to the cut-and-dry format of papers and grant proposals. Thus, composing everyday chronicles in Spanish became a form of liberation from the limits of straitjacketed academic writing.

Satisfaction also came from the emotional release that writing enabled. Although I carefully followed the safety protocols established by the peasant organizations I was working with and never felt that I was in physical danger, journaling soothed the stress, violence, and confusion I witnessed and took part in each day. Writing helped me avoid internet distractions and information overload; it enhanced my concentration and imagination, bolstering my attempts to vividly recall and reconstruct the events I was experiencing. Writing brought me relief.

Despite my efforts, I soon learned that my earliest depictions were inadequate at best. I realized that I was inadvertently summarizing, skipping crucial details, and, most importantly, using evaluative wording. Abstract generalizations and an argumentative approach pervaded my initial entries. As I came closer to the peasant activists I was following, I became conscious of the shortcomings of my writing. When asking questions or referring to situations we had experienced together, many of them seemed puzzled about the terminology I used. One of them squarely mentioned that I was not speaking “properly” and suggested that I start picking up the “peasant form of language-making” (el lenguajiar campesino). I learned about the difference between a strike (a road blockade) and a mobilization (a street march), and their distinct dynamics of resistance. Unlike protesters in Cali and Colombia’s other main cities, the peasants I followed in Popayan were not interested in blocking the road as a way of pushing the government to the negotiation table. Too many promises had gone unfulfilled for too long. Instead, they decided to “sow culture” (sembrar cultura) into the young generations of peasants and transform them into “cultural sowers” (sembradores culturales) as a way of reinforcing what they referred to as “the process.” A highly polysemic and widely used word, I discovered that “the process” lies at the crux of the peasant struggle (la lucha campesina), as it refers to any kind of ongoing or unfinished endeavor of personal re-making and social change.

I decided to approach everyday journaling as a form of gaining consciousness over my own process of absorbing the campesino language and, especially, of acquiring a “peasant way of being and doing” (un modo de ser y de hacer campesino). Translating the work of Fals Borda on participatory action research into a concern for ethnographic writing, I started approaching note-taking as a research strategy for self-transformation and a way of cultivating a peasant way of inhabiting the world in myself. I increased my involvement in the mobilization by letting it percolate through my own writing. I started introducing stylistic shifts that mirrored my everyday experience, heightening my ethnographic sensibility. I relinquished my initial fixation with finding patterns of interaction and well-rounded arguments, and allowed my note-taking to give way to sensory imagery, the transcription of and commentary on lyrics of popular songs, and thorough explanations of peasant concepts. As the mobilization showed a confluence between popular deliberation and dissipation with collective discussions, assemblies, dancing, and relaxation, I also allowed myself to open my writing to playful experimentation by using different voices to adopt diverse stances in my narration of events. Meaning thus emerged as a processual phenomenon from these variegated forms of documenting lived experience, which echoed my own process of self-remaking.

The protests eventually ended in Colombia in July 2021. The daily mobilizations gradually waned as the demonstrators ran out of resources and returned to their farms and working routines. However, the peasants’ discontent with the political establishment took root in Colombian society, which laid the groundwork for the historic electoral victory of the Left last June. Likewise, I continued with my original research plans after the strikes. Akin to peasants who carried the mobilization back to their farms and daily routines as a strategy of resistance even after the protests had ended, the mobilization has continued to shape my writing practice throughout the rest of my research stay.

The research for this essay was supported by the Instituto Francés de Estudios Andinos (IFEA) and CUNY-The Graduate Center. I am immensely grateful to peasant activists from Coordinador Nacional Agrario (CNA) and Comité de Integración del Macizo Colombiano (CIMA) in Cauca.

Miryam Nacimento is a PhD candidate in Cultural Anthropology at CUNY-The Graduate Center. Her doctoral dissertation examines the racial and environmental dimensions of the war on drugs in rural Colombia. She also investigates anti-drug policies in Peru.