From Anxiety to Method: Recollections of Fieldwork and Note-Taking in a Kuranko Village (Sierra Leone)

One’s fieldnotes mirror one’s fieldwork, not simply because they record ethnographic observations but because they shed light on the life of the observer in the field (Devereux 1967). When I examine my notebooks from my earliest fieldwork in Northern Sierra Leone in 1969-1970, I am embarrassed by their superficiality. The paucity of ethnographic detail not only reminds me of my social and linguistic limitations at that time; it reveals how fervently I tried to compensate for my inadequacies by indulging in excessive theorizing and speculation. Clearly, I was trying to alleviate my social anxieties and salvage a sense of agency by pretending that I understood what was going on around me. The confusion in my notes mirrored the confusion in my mind, and abstraction was a magical strategy for distancing myself from a world that bewildered me at every turn.

This bias toward thinking theoretically rather than working empirically also reflected the demands of the profession I hoped to enter after graduation, in which all-encompassing concepts, formal models, and arcane coinages earned you more kudos than meticulous descriptions of everyday life and lived experience. Echoing the supremacist attitudes of the colonial era, it was also assumed that indigenous worldviews lacked the authority of anthropological theory. It would take me several years to be confident enough to assert that the quality of one’s reflections and writing depended less on conversancy with academic fashions than on the quality of one’s relationships in the field. Knowledge was an emergent property of the intersubjective relationship between observer and observed, and one’s note-taking should document and do full justice to this dynamic and indeterminate reality. Becoming competent in another lifeworld and language not only gives one insight into the workings of that world; it enables one to see one’s own culture, profession, and personality askance and anew. Like a phenomenologist, an anthropologist is ideally, in Husserl’s words, “a perpetual beginner” (Drummond 2007, 5).

As I began to inhibit my desire to look at life through the lens of culture or ideology, my fieldnotes became models of thin description. In small pocket-sized Spirax notebooks, I jotted down vernacular idioms, proverbs and adages, fragmentary genealogies, thumbnail sketches, and reminders of questions still to be explored, and each night I composed a more coherent account of the day’s events. By not essaying premature interpretations I soon realized that my mundane descriptions yielded insights that conscious thought might have prevented me from seeing.

In the village, I preferred to light my own fire, to boil water for drinking or bathing. Initially, I regarded this everyday chore as having little bearing on my research and inevitably my method of building a fire was careless and wasteful. Though villagers probably joked about my ineptitude, they did not criticize or censure me, which was remarkable considering the scarcity of firewood and the time consumed in gathering it. One day, I happened to notice how Kuranko women kindled and tended a fire, and I sought to imitate their technique. This involved a thoughtful placement of the firestones, never using more than three lengths of split wood at a time, laying each piece carefully between the firestones, and gently pushing them into the fire as the ends burned away. When I took pains to build a fire in this way, I became aware of the intelligence of the technique, which maximized the scarce firewood (which women had to split and tote from up to a mile and a half away), produced exactly the amount of heat required for cooking, and enabled instant control of the flame. This practical mimesis afforded me insight into how people maximized both fuel and energy. It made me see the close kinship between economy of effort and grace of movement. And it provided me with a model of how to write fieldnotes with economy and efficiency. 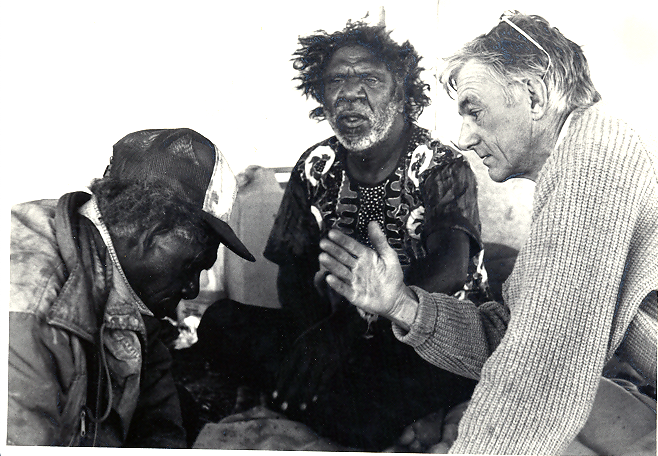 Michael Jackson during a later period of fieldwork with Warlpiri interlocutors during fieldwork in Central Australia in 1994. Indigenous protocols dictate that the names and images of deceased individuals should not be reproduced until a customary mourning period has passed—which is the case here. Photo credit: Michael Jackson.

Many of my insights into Kuranko social life followed from a comparable cultivation of practical skills. During my first few months in the field, I attempted to write up my fieldnotes during the day. Constantly interrupted by my concerned hosts, who were uncertain as to whether I needed companionship or preferred my own company, I soon realized that either way my writing was incompatible with being a good guest or neighbor. I now took time to greet my visitors as custom demanded, to offer them a cup of tea and, to the best of my linguistic ability, engage them in conversation. As with my fire lighting, so with my socializing—it took me a while before I noticed how others performed these tasks, and even longer before I began emulating local usages. This meant breaking my characteristically Western middle-class habit of making conversation with a guest, and of filling silences with small talk. Among the Kuranko, neighborliness is expressed through customary greetings and the sharing of food and drink. But mutual recognition does not require earnest talking and is best consummated in amicable silence—an ability to simply be-with-another, an art of co-presence.

By learning to rely on observation and imitation rather than interrogation, I went a long way toward a participatory understanding of local praxis, literally putting myself in the place of the other, inhabiting their world.

To participate bodily in the everyday practical life of another society may be a creative technique that helps one grasp the sense of an activity—just as eating as locals eat, working at the pace at which locals work, and going along with local priorities may carry one into an understanding that could not be attained through questioning, observing, or inference alone.

Understanding cannot be attained simply by seeing (either through inspection or introspection); it implicates all the senses to varying degrees and involves a bodily relationship with the objects and others around us. This means that ethnographic practice subsumes the allegedly disinterested understanding of epistêmê in technê, where even theory building is construed as one technique among many for making our relations to others more practically and socially viable.

What then were my practical and social aims in doing ethnography? And how did my evolving methods of note taking, tape-recording, participating, and observing serve these aims?

Even though, at first, my goal was to write readable books, the imperatives of completing my doctorate and pursuing a professional career took precedence. But having secured a tenured position and found funds for further fieldwork, I revived my original writerly ambitions. This narrative turn was partly inspired by phenomenology, existentialism, and pragmatism, partly by a change in the kind of data I recorded. My notebooks became filled with life stories and accounts of critical events, and these increasingly determined the shape and style of my writing and the philosophical preoccupations that informed it.

Devereux, George. 1957. From Anxiety to Method in the Behavioral Sciences. The Hague: Mouton.

Michael Jackson is internationally renowned for his work in the field of existential anthropology and has been widely praised for his innovations in ethnographic writing. Jackson has done extensive fieldwork in Sierra Leone since 1969 and also carried out anthropological research in Aboriginal Australia, Europe, and Aotearoa New Zealand. He has taught in universities in New Zealand, Australia, the United States and is currently Senior Research Fellow in World Religions at Harvard Divinity School. He is the author of over forty books of poetry, ethnography, fiction, and memoir.