“It is nothing short of a miracle to be in the presence of a farm animal who has managed to reach old age.” – Isa Leshko, Allowed to Grow Old (2019: 13)

Isa Leshko takes portraits of elderly animals, such as thirteen-year old hogs that have been allowed to build memories in their bodies and minds. The hens and cows that she depicts live on farm sanctuaries, where they will either die of old age or succumb to prior industrial injuries. These farm animals escaped slaughter as youths — unlike the 121,000,000 six-month-old American pigs killed last year just prior to when their rate of weight gain slows. Copyeditors insist that our inherited language from 1960s Iowa dictates we label young animals as “pigs” and grown ones “hogs.” But Leshko shows that domesticated hogs are rare in this country. The adulthood of a species has been casually annihilated as an “inefficiency,” a theft of corporate time and resources1.

It is nothing short of a miracle. I see Leshko as a creative chronicler of nascent social movements towards unefficiency. These sanctuaries are not “inefficient,” nor the product of idleness. They result from tenacious work to bring and maintain life outside societal metrics of capitalist time and productivity.2 More broadly, Leshko’s visual practice generates modest fantasies that reveal the irrationality of late industrialism; modest because she does not ask for very much, but a fantasy all the same since even the minor concession of letting pigs become hogs would require another world. 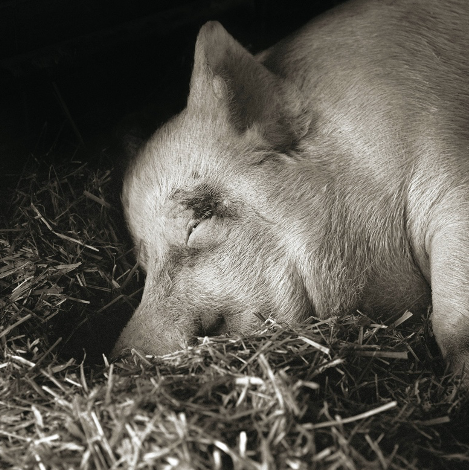 After Covid-19 recedes into memory, my own modest fantasy is that meat workers will be able to cough. Four days before Donald Trump blocked that possibility by invoking the Defense Production Act to preserve the “critical infrastructure” of slaughter, the New York Times published a story that should stand as a testament to the still-evolving, ever-more-brutal, century-old legacy of Frederick Winslow Taylor.

This article, ostensibly about a lawsuit against Smithfield Foods, contributed yet another dimension to the growing array of factors that make meatpacking such a profound vector-like site for the virus. The costs of refrigerating warehouses lead corporations to compress labor tasks into as tight a space as possible, and those very cooling systems may effectively preserve the vitality of airborne virus particles. American slaughterhouses seek to monopolize all known capitalist value in a species, jam-packed with thousands of people who each perform one slightly distinct knife motion over tens of thousands of animal carcasses. 150 years of industrial capitalist intensification has pockmarked the porcine body with hundreds of unique sites for exploiting surplus labor value. Personal protection has often been minimal. This institution has long been scaffolded by American racist indifference to migrants and refugees, so widely distributed that relatively few batted an eye when the president proposed to effectively sacrifice scores of people to cheap meat. But one worker’s explanation in that story really stuck out. Why is this place, specifically, so virulent? It is because the pace of work on the kill floor is now so fast that people are not even afforded the split second that it takes to raise their hands and cover their mouths. You cannot cough without potentially taking away a fellow employee’s ability to breathe.

The capacity to raise one’s arm to cough. Or, the right to a bathroom break for workers who are forced to wear diapers on the dis-assembly line. Or the abolishment of a legally sanctioned form of work that will almost inevitably maim people through repetitive motion injuries. Covid-19 and some other zoonotic diseases are illnesses of outlandish productivity. They emerge from attempts to engulf every space of the planet, and all the non-human species therein, with capitalist time and value. And they appear to circulate most swiftly in workplaces — like prisons or slaughterhouses — premised on disciplining peoples’ movements like they are marionettes. Shortly after Frederick Winslow Taylor introduced his 1900s procedures that hoped to define all non-productive motions and time as waste, scores of critics said his ideals were inhuman. They reduced people to physical instruments and, following Antonio Gramsci, pretended people could be automata-like “trained gorillas” at work. 2020s American meatpacking is amongst the most mature realizations of Taylorist principles, with little time-motion left to engineer. A combination of labor cheapened through racialization and the biological variability of animal bodies has mitigated against the development of machines to replace humans. The minimal technology in place, mostly moving chains and conveyor belts, increases pressure on workers’ bodies. This disassembly line has evolved to the point where it is inanimal. Its unending drive to trim seconds from labor processes turns animal physiology — initially hog, and now human — into problems of production. Line work cannot accommodate human lungs, bladders, or tendons. And it is incapable of anything except trying to move faster even amidst a catastrophe.

In the time of Covid-19, it is remarkable how little anyone talks about Taylorism anymore. It is passé, neglected, forgotten, and yet ubiquitous in social life — just like meatpacking’s killing floor. You can even detect its echoes in (nonetheless important) popular fantasies of the future that hope to insulate the time of life from encroachment by work. The six-hour day, the four-day workweek, or the automated machines that promise release at some distant point over the horizon. Freedom from work is burgeoning as a site for the political imagination; freedom during work feels moot and apolitical. This one-sidedness risks reiterating Taylorist ideals. Produce faster so that life-time can be more full. Sacrifice paid time to frantic motions and the icing of tendons to give your children a better life. Give hazard pay. Meanwhile, slaughterhouse workers and their children continue to issue the same calls they have been issuing for forty long years: Slow down the pace of work. Reduce the speed of the chain and conveyor belts. Cut up and process animals’ bodies less.

I am disturbed by the fantasies that come to my mind most readily these days. They all revolve around limits being stretched until something cataclysmically breaks.

But that is not what happened.

The events of July 2022 did not happen because of out-of-control sickness, corporate liability, or visceral stories of people being reduced to instruments. It was a quiet revolution, although many fortunes and (admittedly) less-than-fortunes were lost. People said something was in the air, something collectively clicked after another summer of demands for a more human world crossed a chasm onto factory floors. But that would be to miss the patient and (still) under-described organizing that fomented the effervescence. People from all over started showing up in formerly obscure towns like Greeley, Colorado or Sioux Falls, Iowa to block slaughterhouse entrances. It was initially narrated in the political media as a turning point when summons for racial justice shifted from cities to rural towns, and from making demands of local governments to multinational corporations. Many pundits missed the mark in the early days, when they ascribed the occupations and shutdowns of packing plants across the country as reflections of compassion for ultra-exploited workers and animals in one cruel sector.

When factory occupations spontaneously spread to new workplaces inside and outside the United States — tomato fields, food retail, electronics assembly, teaching, nursing homes, data coding, and even sales positions — it instead became clear that people felt a distant (and, in some cases, immediate) pang of solidarity with the meatpackers’ demands. They saw something in those calls to work less, work slower, and work fewer things — not the chance to merely get a break, but for another future yet to come. Doing less had somehow come to feel like an aspirational project, not an absence. Progress was not measured exclusively by the time it took to complete a task, though that definitely mattered. No one believed utopia could be found at work, whether in the home or the office. Instead, they were united in a refusal to allow the working day to become a period where regular time is suspended, with rules, norms, and forms of authority that are distinct from the rest of life. The tale is complicated. It would be unrecognizable to those from the period before who believed it permissible to reduce work time to repetitive motions and compulsive productivity. It involved a host of new kinds of people who emerged from the long shutdown like unefficiency engineers, reproductive labor coordinators, work limiters, and other experts tasked with progressively growing the density and joy of time rather than fretting about its passage and wastage. Time after Taylorism was not measured by lost seconds of human motion, but by thickening and expanding found moments of life time in homes, work, fields, forests, and streets.

Slaughterhouses, and a great many other industries, never did bounce back from the shutdowns. Some people chose to keep hogs. But that is another story.

[1] This essay is in debt to Alyshia Gálvez’s theorizations of agricultural efficiency in the book Eating NAFTA (2018) and Devon Peña’s analysis of the torture of assembly lines in The Terror of the Machine (1997).

[2] My limited knowledge of everyday life and work on animal sanctuaries comes from the remarkable emerging scholarship of Elan Abrell (2019) and Heather Rosenfeld (2020).

Peña, Devon. 1997. The Terror of the Machine: Technology, Work, Gender, and Ecology on the U.S.-Mexico Border. Austin: University of Texas Press.

Alex Blanchette, an Associate Professor of Anthropology at Tufts University, is the author of Porkopolis (2020) and the co-editor of How Nature Works (2019).