Dearest, you are home. It lightens my heart to say this. You are home, you are home. Say it with me, let the syllables move over your tongue: home. It is a luxurious word in English, a word that sounds like what it is: refuge and warmth and a place to be without worrying over what is next.

I know this so well because I struggled for this word. Yes, most of my life was lived in the Before times. Is it useful for me to describe them?

I will, but I don’t want to dwell too long on what we worked so hard to end.

In the Before times many of these buildings—yes, the ones so many of us make home in now —were empty. Some buildings no one lived in, and many were used for work and then left empty all night long. And amidst all of this, people lived on the streets and died because it was too cold or too hot. People built shelter outside of these buildings out of cardboard or whatever they could find and were told to move every day and never really had a place to call home. Many buildings stood empty, simply because those who owned them kept them so.

You see my dear, in the Before times some people had control over the rest of us. There was a system that justified this. Those without enough money could not have a home. This system also used the way we looked, our hair texture, our eye shape, the color we are on the outside, to sort people. And this sorting often decided who was more likely to have a home and who did not.

But often, even the people who had a home were scared. At times they had to choose between rent and food or between medicine and rent. When they didn’t pay this rent they were forced to leave. Sometimes even when they did pay this rent, they were forced to leave because the person who owned the house, which was to them just a house and not a home, said so. Why? Because they wanted someone else to live there. Someone who could pay more rent and often that someone was white.

What’s that you say? I’ve confused you? You don’t understand why the buildings would be empty if people needed homes?

The Before times are hard to explain. How to explain that the collective land beneath our feet used to belong to individual people? It is the same dirt and rocks and soil. It is the same concrete and glass and asphalt as it is now. The same walls and windows and paint. In the Before times there was a thing called “private property.” It was an abstraction. But like most abstractions it was also very real. It meant that some people owned their homes but most did not. People and things called hedge funds and landlords owned most, and in this way whole cities belonged to a few people’s “investment portfolios.”

Then came the Turbulent Times. They came suddenly and we were not prepared. This was a time of disease, change and resistance. The disease was a pandemic and the pandemic was a portal.1 People understood that change was coming. That change is the only lasting truth.2 That to shape this change was the only way forward. That resistance was the only way forward. Through the portal we saw that things could be different. The people who had lived on this land before private property could teach us how to move forward. Indeed their history, Indigenous history, was the future.3 We started to listen to them. We started to shape change. 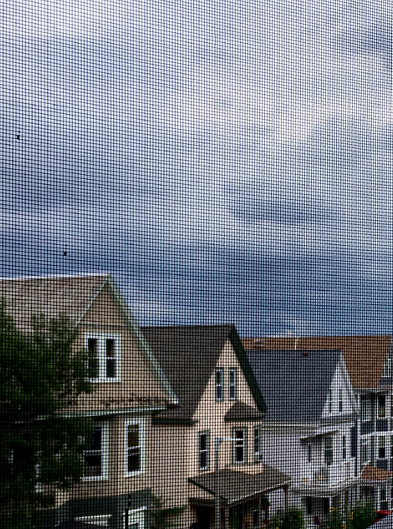 Home and sky and clouds through a screen. Manissa M. Maharawal

During the Turbulent times, people could not pay their rent. More and more people were forced to leave their homes and this was enforced by people with guns. So, we turned to an old tactic, one that had been used before but never in such great numbers. It was simple. When someone received a notice to leave, when the men with guns were going to come and take their home, often to let it stand empty, we stood together in front of the home. We stayed. We didn’t let the men (they were almost always men) with guns take the person out of their home and put their belongings on the street.We went to the eviction courts and stood in front of them too and refused to let the lawyers and the landlords in. Soon the courts where people lost their homes couldn’t function anymore.

Once we learned that we could protect each other and keep our homes, people stopped paying this thing called “rent.” Things happened quickly after that. Nearly everyone stopped paying once they understood that they shouldn’t have to. We made maps of these “rent strikes” but soon the whole map was full. If anyone tried to take someone out of their home we stood there together and stopped them. It was simple yet profound. Of course the landlords, and the hedge funds and the police fought back. People protested the police, something they had been doing for generations, but now they called for the end to the police. They understood that the police protected private property over human life. The Turbulent times were a time of great learning. We learned that everything must change.

Next came the Burning times. Dearest, I want you to know that we did ask the people with power to cancel the rent. To free the prisoners. To disband the police. To stop the men with guns. We asked them for many, many years but they never listened. And so finally we stopped listening to them. What choice did we have but to burn them down?

Fire destroys and yet it also gives life. In the Burning times we lit fires and burned down the things that no longer served us: the prisons, the detention centers, the police stations. We burned the courthouses and the military bases. We burned the old buildings of power that were often built by slaves. It was a time of action and rebirth. In the Burning times we took over many buildings that were empty and people started living in them. The banks had become useless, no foreclosures to carry out, no one to lend money to just so they could have a place to live. No endless debt. The cities emptied of these useless spaces along with useless real estate offices and luxury stores. This empty space was soon filled with people who needed homes. Construction sites were abandoned, gaping holes left in our cities. We took these sites and started growing food. We took to the rooftops and the meadows in the parks and started growing food. We went into real estate offices and took the keys to the city. And now we had a place to live and also had food to eat. We protected these sites with our bodies, we smashed the construction trucks. We smashed the locks on the doors. In the buildings where we lived, new social relations emerged, ones not predicated on buying, selling and exploiting, but ones based on care. I want to say that again—care. We take it for granted now but then it was new and it was radical. We fought for a chance to start over. It was a long fight. I became old in the fight.

The Burning times were also a joyous time. Living together in these new homes, homes made from places never meant to be homes, we were creative, and we found each other. We found our power. Some people didn’t want anything to change. Maybe they felt good knowing they had power over others. But we found that power over didn’t need to be. That we could have power between instead.4 We were excited and nervous and scared and more alive than we had ever been before. After the fires we looked around and we looked at each other. The burning had created new spaces, materially and abstractly. We asked each other what we wanted and the things most people wanted were simple and the same.

People wanted home and love and health and peace. We had built some of this but there was more to do. We took what was left, the buildings and the land, and we decided that no one owned them. We rebuilt. These were the Building times. They lasted many years as well. And now my love we are here. I am old but I am happy. The times we live in now don’t have a name yet. But if I were to guess they would be called the Home times.

[2] Credit to Octavia Butler and her Parable series.

[3] Credit to Nick Estes’s book about indigenous resistance Our History is the Future.

[4] Credit to Marina Sitrin and her writings on horizontalism.

Manissa M. Maharawal works as an Assistant Professor of Anthropology at American University in Washington DC.