The Great Turning and the War System

The Pentagon is the world’s largest office building. All its energy needs are met by the advanced solar panels on its huge flat roof surfaces. Its six and a half million square feet of space allows it to accommodate and create synergies between many of the key federal agencies working on public welfare programs. The Centers for Disease Control, the Food and Drug Administration, the Labor Department, the Center for Progressive Taxation, and the Department of Equality are celebrating their 10th anniversary in the building, and so most of their workers came into the office today, by bike or the Metro, to mark the day with co-workers in person.

The Department of Defense and Reconstruction (DDR) operates out of a building 1/10th the size of their former offices. Most of its workers are civilians engaged in large-scale projects of infrastructural reconstruction and UXO—unexploded ordinance—removal in Afghanistan, Iraq, and other of the world’s various ex-war zones. The Office for Domestic Reconstruction is engaged in administering reparations for slavery and Native American genocide, veterans’ welfare, and military base toxic clean-up and conversion to civilian use. In that building, today also marks the anniversary of the independence of Guahan1, the island nation which housed two of the most toxic and provocative bases the United States had established and used for decades. The office engaged in overseas base clean-up is working on the final retroactive rent payments for the decades of land-takings on Guahan and final coordination with the Department of Health for on-going assessments and treatment of it citizens sickened by the jet fuel and other toxins leaked into their water supply during those years.

The DDR budget decreases each year as they complete all or parts of their tasks. One of those completed tasks was the closing of Fort Bragg in Fayetteville, North Carolina the year before. The excellent schools, golf courses, and hospital on base now used by the citizens of Fayetteville are much improved over their previous facilities. The sand in the soil that gives that region its Sandhills name is now mined for beach repair along the Carolina coast, as sea level rise had been slowed enough to make beach replenishment a non-Sisyphean proposition. With the radical shrinking of military operations, so also shrank much of the military’s 59 million metric tons of annual greenhouse gas emissions. It helped that rail travel had been reinvigorated by a Department of Mobility now focused on sustainable transport and rights to the city for the disabled that was sustained by a fraction of the previous DoD budget.

The older people in Fayetteville remember what the roads used to be like before the Great Turning. The road to the former base had been a littered and rough rumble of a ride until reaching the boundary of the military facility. There the asphalt suddenly turned smooth and its grassy edges were manicured. That was when the military had so much money and so much cultural status that they were able to create a society behind their fences where there was universal health care, no homelessness, and full employment. That was when there was a sense that the people in uniform there were the best of America, not because of the money and public relations invested in them, but because they putatively kept us safe.

North Carolineans’ age mates on Guahan could also recall when the long road beside the United States’ Anderson Air Force Base had been allowed to disintegrate into a five-mile-an-hour obstacle course of rocks and axle-bending holes. That was despite its importance as the only route to the island’s main public park, pristine beach, and indigenous CHamoru cultural heritage sites. Inside the base, life was much smoother. The military’s children had new, well-staffed schools found nowhere else on the island and the military medical facilities were spanking fresh and superior to those off-base. The oil pipeline that snaked from the harbor up to the B-2 bombers’ airfields had sprung leaks of jet fuel over the island’s aquifer for decades, but no one on base had bothered to notify the public that their drinking water might be unsafe.

But then the virus came. It slithered along all of the visible and invisible fissures of inequality and injustice that existed in both places. It did not strike a random sample of the humanity there but rather attacked the most vulnerable. In Fayetteville, that was the old, the sick, the working poor, and the African-American community living with the poorer medical care and health that are the legacy of slavery. Fayetteville’s military-base economy mostly created low paying retail jobs while the economies of other North Carolina cities enjoyed relatively more prosperity because they had hitched their wagons to other more lucrative economic opportunities.

On Guahan, the virus came most dramatically on an aircraft carrier, ironically christened the Theodore Roosevelt. Roosevelt had been Secretary of the Navy when the Spanish American War broke out, leading to the colonial capture of Guahan by the United States. The virus had leapt from sailor to sailor in the Roosevelt’s close quarters, and the people of Guahan were given no choice as to whether to accept the risk associated with their disembarking. This lack of choice was the same as with so much else of the military presence on the island. The virus joined the toxic contaminants produced by military activity to leave islanders with much poorer health than even Fayetteville’s citizens. 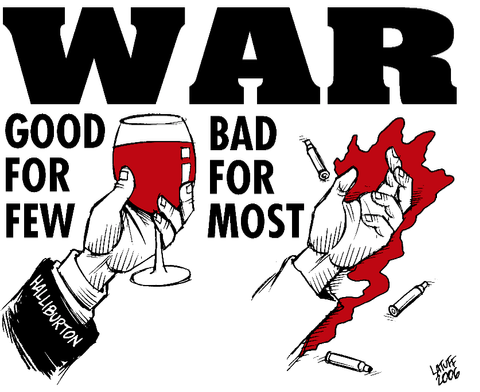 The virus exposed these fissures for all to see more clearly and also tore the emperor’s clothes off the US military behemoth. Some in the USA who profited mightily from existing military spending tried to ramp up China’s enemy image as the source of the virus and as threat to US global hegemony. Nonetheless, it became clear that the military was not going to save anyone from the virus – the Pentagon’s hospital ship sailed into New York Harbor with great fanfare but left, ineffectually, at the height of the virus. The episode on the Theodore Roosevelt showed that the military itself was as vulnerable as the rest of us. But it was the extravagance of the military jet flyovers of major US cities in 2020 that smelled of hubris as those below, working in ambulances, hospitals, and food banks to save lives, struggled to find personal protective equipment. The vision of US soldiers threatening and wreaking violence on US cities streets soon after gave people just a small sense of what the US government had been sending those soldiers to do overseas for years. It further fueled the independence movement on Guahan and the racial justice movement in the USA, and the clamoring of people in a huge range of civic organizations and movements to deal with inequality and a slowly dying planet. Each of those movements saw a host of problems that could be solved with the reallocation of the war system’s two-thirds share of the federal discretionary budget.

The corporate interests who lived on Pentagon largesse did not give up without a fight. They tried to suggest their fortunes were crucial to employment in the USA, but the mass unemployment brought by the virus led to a questioning of the Pentagon as the largest and most discriminatory public jobs program of all time, with its quota of 15% women in the ranks and with its higher paid engineering and technical labor staff being mostly white and male. With time, data became more widely available showing how spending on health care, education, and sustainable energy conversion created many more jobs per million dollars spent by the federal government than did military spending.

Those corporate interests were also set back on their heels as democratization deepened with the outrage generated by the government’s failure to provide true human security from disease and from racialized killings and poor health care for over half the US population. The movement to Defund the Police fed into the movement to Defund the Pentagon. The people’s representatives became more representative as those movements got out the vote. They demanded Congressional hearings on military spending in 2021 that exposed, among other things, how much of the $6.4 trillion price tag for the war on terror constituted war profiteering, at best. They confronted the facts, not only of at least 800,000 civilian deaths during that war, but of the millions of indirect deaths that had occurred and were continuing to occur as a result of the war’s destruction of infrastructure, mental health, and livelihoods. The military budget shrank, first by cancelling massive contracts for weapons systems, then by closing most overseas bases, and finally by reducing military forces by 90 percent to a “mere” 220,000 workers. As people began to subjectively feel more secure as those movements and their government did the work to reorient themselves towards human security, the system became affectively, politically, and economically self-reinforcing. And it became clear how much the military, seemingly a separate realm, had, before the Great Turning, occupied and misshapen so much of our world. Another reality had been possible all along.

[1] Guahan is the indigenous spelling of the island’s colonial era name, Guam.

Catherine Lutz is co-director of the Costs of War project at Brown University and the author of Homefront: A Military City and the American 20th Century and The Bases of Empire.