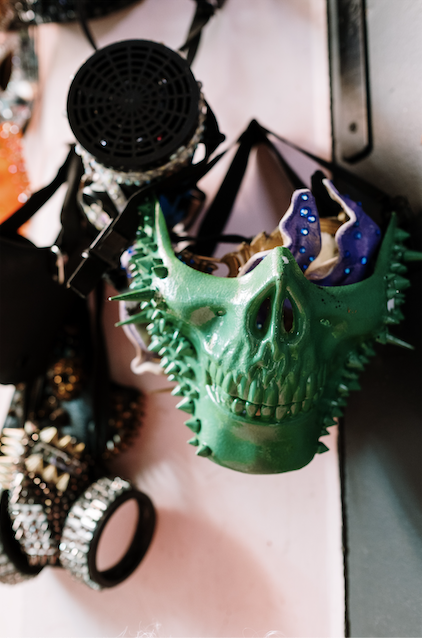 Zina sat on the edge of her bed, looking down at her knobby rope-veined hands, curled together her lap. Andrew’s chair was so close that their knees almost touched. He sat quietly, the diagnosis reverberating in the air between them.

“I’m so sorry, Auntie.” he said. “We can make sure that you stay comfortable.”

She looked up and met his dark eyes, set off by the bright green coat that hung open over his clothes, stethoscope bulging in his pocket.

…That you stay comfortable. The pain would worsen, then.

Fear must have shown in her eyes. He leaned forward, and took her hands in both of his. “I’ll stick by you, Zina. We all will.”

“Thank you, Andrew,” she said, forcing a smile. He had always been such a kind, gentle boy, since he was a little thing – a born Tender.

They spoke for some time about what lay ahead.

When he left, Zina’s thoughts turned to the children she tended now, Angela and Ming. Any news, good or bad, travelled quickly through the mall — and they mustn’t hear this from anyone but her.

With an effort, Zina pushed herself up to stand. She closed the door to her room and walked slowly through the common rooms, nodding to her housemates as she passed. The front wall of the Banana Republic where they lived was floor to ceiling windows. A row of potted lemon trees, herbs, and vegetables stood just inside.

Zina pushed open the front door and walked out onto the wide balcony. The common area echoed with a buzz of conversations, some mechanical sounds, snippets of music.

A clutch of young people stood together nearby, talking and laughing. As she approached, one of them peeled away and came toward her. “Auntie, may I walk with you?”

Tamsin was taller and more grown-up than when Zina had last seen her, and now proudly sported the yellow overcoat of a Tendril, in the first year of her Tendency.

“Thank you, dear,” Zina replied. “I just need to go over to the Nike preschool.” Tamsin took her arm and slowed to match her pace.

Preoccupied and subdued, Zina said very little else, but Tamsin did not seem to notice. As they walked, the girl chatted happily about her friends, her Tendency group, the play she was in.

Zina thought of her illness, of dying, of people she loved and all that she would lose. Grief caught at her throat. No – she could not think of that now. Zina forced her attention back to her surroundings, concentrating on the names above the doorways they walked past: Gymboree, the Limited, Victoria’s Secret.

Few but she were old enough to remember malls before the Great Decline, when these names referred not to homes, schools, and workshops, but to stores. Great, shining temples to storage.

Back then, storage was what awaited people too when they grew old. Many lived out the end of their lives in age-segregated housing, designed less as places to live than as warehouses for people considered done with living.

Those who tended people in such places were ill-treated, too few, and generally demoralized. Then as now, there were some for whom tending was a calling, but the work they did wasn’t properly recognized or valued, and their knowledge of tending wasn’t documented, shared or developed.

Then the First Pandemic came, devastating eldercare institutions and malls alike. Along with so much else, the virus killed the cult of storage. A revival of mending, lending, and tending had followed.

Zina sighed. It was a blessing, at least, to be living – and dying – at the present time. She would be cared for until the end by Tenders trained their whole lives to do this well. They were versed in arts and skills once parceled out among doctors, nurses, aides, therapists, and artists. Tenders knew about medicines, of course, but their work was to help people live and die in a fully human way, with meaning and dignity.

Andrew, Zina knew, had already notified the Agency. Tenders would be arranged for her, some of whom she knew already – from the mall councils, the mending workshop, the choir, or because she had tended them as children.

Tamsin chattered on cheerfully about her daily schedule. The girl was too oblivious to have a calling, Zina saw clearly, but she would serve her two years Tendency with a good heart. She leaned into the warmth of Tamsin’s strong young arm.

At the Nike preschool, Teacher James greeted her with a quick hug. “Can you wait a few minutes to take the kids?” he asked. “They’re working on something important.”

Ten children sat around a low oval table, bowls of water-and-flour dough in several colors at either end. Quiet and focused, they sat working the dough into shapes.

Angela was rolling red dough into ropes. Ming, biting her lip in concentration, was carefully pinching up spikes of white dough atop a blue ball.

“They’re making people,” James said. Pointing his chin toward Ming, he added, “I think that’s you.”

Zina took the two children down to the main level of the mall and they found seats near the stage. She gave them each an apple then told them she needed to talk to them about something important.

“Tender Andrew gave me some serious news this morning,” she said. She explained it all in simple plain language, and answered their questions honestly. No, there wasn’t anything Tender Andrew could do to make it go away. No, they couldn’t catch it. Yes, she would die.

“Are you too sick to tend us anymore?” Angela asked, finally.

“Eventually I will be,” Zina responded, stroking the girl’s hair. “But not for a while yet.”

Angela looked at her gravely, unblinking. “Auntie Zina, if you get sick and can’t tend us anymore, we can tend you.”

A painful lump in her throat, Zina said nothing then, but leaned forward and drew them both close.

The stage was a rectangular wooden platform in the large open area of the mall, lit from above by a large skylight. The chairs around Zina, Angela and Ming filled as people arrived for the performance. Groups of children arrived from school, adults from their workplaces. Actors waited beside the stage, wearing simple fabric costumes and headdresses.

A hush fell as the Tenders walked in, lined up in rainbow order, the colors of their overcoats indicating their skill and seniority. When they reached the rows reserved for them at the front, the Tenders turned and bowed quickly before taking their seats. A wave of applause greeted them, then died down as the actors took to the stage.

Today’s play, “Tender Idea,” was one that every audience member knew by heart. All had performed different parts at different times in their lives. Everyone had helped sew costumes, build sets, and decorate the scary papier-mâché masks worn by the evil Virus character. The songs from the new musical version were wildly popular, and most people knew all the lyrics.

The play opened, as it always did, with Idea Wilson as a young woman, deep in debt and struggling to get an education. Then came the First Pandemic, and she watched her aged father suffer and die without care because they had no money. During the Great Decline that followed, Idea channeled her grief into heroic action. Acts II and III showed her setting up the first Tendencies, training the first Tendrils, and establishing Tending as a valued and respected calling. The play closed with the iconic scene of Idea dying, cared for by skillful and gentle Tenders she herself had trained.

The historical reality was far more complicated, Zina knew. But the story was familiar, the performers were good, and the play moved her.

During the final scene, when Idea lay dying, Ming crawled into her lap and wept, arms around her neck. Zina held the child and rocked her, patting her back. “It’s okay, sweetheart, it’s alright.” Angela put her arms around Ming too, and leaned against Zina. The three of them stayed like that until the child’s sobs ebbed away.

When she finally looked up, Zina saw that most of the audience was gone, but a couple of dozen people remained, loosely gathered around them. She saw Andrew, and Tamsin, and several other Tenders she knew. Her Banana Republic housemates were there, and some of her neighbors from Big 5 too.

Andrew stood up, leaned back slightly, and she heard the sad sweet melody of the theme song from the “Tender Idea” musical pour out in his deep voice. Others joined in the chorus:

Through the tears that welled in her eyes, Zina saw the mask of the evil Virus lying abandoned, as if defeated, on the stage.

Zina and the others stayed there for some time, talking. Eventually, tired of the adults’ conversation, Ming and Angela and three other young children wandered over to the stage and clambered up. Zina saw Angela pick up the virus mask and put it on. Soon, the five of them were caught up in a new pandemic story of their own making.

Zina could not tell how it was going to end.

Janelle S. Taylor teaches anthropology at the University of Toronto.