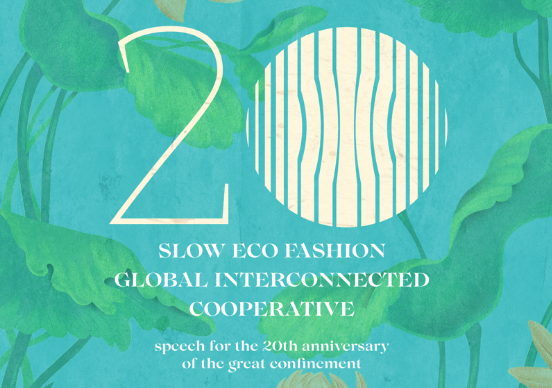 This year it’s my turn to speak.While much has changed since the First Great Confinement, the ritual of celebrating recurrences still retains all its importance.

I am particularly honored to have the opportunity to speak on this 20th anniversary. First of all, because twenty years ago we, the seamstresses—at that time still called petites mains with the French nomenclature, a designation that in a single gesture reduced and depoliticized our work—were at the very bottom of the fashion industry hierarchy.

We were left out of the spectacular imaginaries that were used to make people dream, and then consume, far beyond their needs. We were also invisible in the many behind-the-scenes audio-visual productions that spectacularized and aestheticized fashion work, that gave viewers the perverse illusion of exclusive access to the unseen. We were out of it all, in good ways as well as in bad ways.

It was this first major shift in the the global health crisis that made our work visible by its usefulness, rather than by photoshopped and Instagrammed representations. While the system of Tweets, paillettes, retouching, podiums, laces, castings, catwalks was at a standstill, we were at the front of the stage, sewing masks and gowns. First for the health care workers, then for civil society.

At first, we were satisfied with the symbolic acknowledgments, appreciation, and gratitude expressed in the media. We were drawn into this regime of affective and emotional labor, called to contribute in solidarity in a moment of emergency. But very quickly, the impulse of solidarity completely took over our lives. A production that was meant to be artisanal became industrial scale production at home, but without the necessary infrastructure, and also without remuneration. The State, which was then at the climax of its neoliberal phase, tried to take over our know-how, our time, our bodies, our machines, our living spaces, our lives, to make us produce masks for free. I say the State tried, but in reality, for a while it succeeded. During the First Great Confinement, millions of masks were produced by thousands of seamstresses who were not paid. But then it dawned on us; some of us lifted our heads up from the sewing machine to write our anger on social network platforms. We denounced this exploitation. We got together. First we organized online, then in meetings and in actions. We formed a movement. We informed each other. We talked. We read. We saw that feminists in the 1970s had already denounced this type of exploitation for domestic work, for care work, for reproductive work. We relied on their analyses; we appropriated them. We sewed them into our practices.

If today fashion is no longer among the richest, most unequal, and most polluting industries on the planet, if today we are part of the Slow Eco Fashion Global Interconnected Cooperative, it is thanks to our first audacious gesture of revolt. A small handful of us, the most mobilized and the most visionary, filed Class Action lawsuits against the State and against the biggest luxury conglomerates. The others followed and signed up for the action—by the hundreds, then by the thousands—in various countries. We won. The States had to pay, the corporations had to pay.

To this unexpected result was added another. The models, who as were highly visible workers at the apex of this symbolic value chain of fashion—who embodied the dream that fashion was selling at the time—were inspired by our action. The First Great Confinement had made their professional situation even more fragile. The threat of the virus had confronted them with the physical vulnerability imposed by their work. At the time, they were very thin, most of them minors, migrants in countries where they did not speak the language, and where they had no social ties. Above all, at the time, they worked for free—or better still, they were paid in handbags, lipstick, and symbolic prestige as visibility and hope for venture labor.

Despite this, some of them had the cultural and social capital to take action. The NGO Model Law launched the mobilization. They came to talk to us. We shared our experience with them. They also filed a Class Action, this time against agencies, major press groups, and luxury conglomerates. They won too. They used their social networking skills and their visibility capital to publicize the action. It became international, then global. The capital of large companies started to weaken significantly.Then it was the turn of the farmers who grew cotton. It started in India, where at the time, thousands of peasants were setting themselves on fire, choosing death over the debt system generated by Monsanto’s transgenic seeds. They had nothing to lose and everything to gain: their land, their health, their lives, their work, their rivers, their seeds, their birds, their insects, their plants, their air.

They all won. We won. And it is this victory, the victory over neo-liberal capitalism through fashion, over its exploitations through work, subjectivities, bodies, materials, imaginaries and desires and of environmental resources that we are celebrating here today.

I invite now our colleagues of the Deconsumers and of the Deproduction sections to present the results of this year.

Thank you very much for your attention.

Giulia Mensitieri holds a PhD in Social Anthropology and Ethnology from the Ecole des Hautes Etudes en Sciences Sociales of Paris. She studies the transformations of labour, new forms of dominations and exploitations, and the political weight of imaginaries through fashion, and is the author of The Most Beautiful Job in the World.