Each time a pickaxe meets the rocky land, a sharp sound resonates loudly before escaping into the night. From the middle of the valley, where they are standing, you can hear it bounce off the walls of the hill and continue its increasingly muffled course, until it dies out. By then, the beaky noses of axes have again hit the soil, and new sounds take over – brotherly sounds, following the same course, respecting the same rhythm, then slowly disappearing. The valley is an echo chamber of their labour.

It strikes Samah that the lifespan of a pickaxe’s echo is a metaphor: for her life, that of her friends and comrades, for the revolution. When it began, some ten years before the first pandemic, they threw their hearts and fists into it: sharply, decidedly, they hit at the rocky façade of misery and injustice, chipping away at the structure of humiliation and rage, one blow at a time, just like the metal head of the axe opens up the soil of the valley with slow but determined repetition. And, just like the muscular arm of Jacques rotates around his shoulder to bring momentum to each stroke, their rising was moved by decades of anger and frustration; it felt inexorable, propelled into the open by the slingshot of history. Then, comrades started fading away, their shouts an increasingly distant echo, their dreams quieter and quieter.

It was when she learnt about Khaled’s death that she really panicked – the pain and sadness were so overwhelming they transformed into waves of anxiety– the words of the uprising collided, freedom, solidarity, unity… What did they all mean if Khaled could be killed, if the immortal could die, and she could not do anything? His photo appeared on social media, his sweet faced crowned with the word “martyr”; tales of his heroism were typed on Facebook; accounts of his sacrifices added to the ever-expanding cenotaph of the uprising – where deaths without corpses ran into disappearances without witnesses.

She was tempted, too, to fixate in her memory this image of her brother as a hero – how else could she reconcile the vitality of his struggle, of his laughter, with the bottomless blindness that swallowed him? But she knew that the greatness of his involvement did not reside in a superior exemplarity or in isolation: on the contrary, its immensity came from the transformative experience of comradeship, from the thousands of anonymous names that resonated in his. Khaled. When she calls him, as she still does sometimes, walking alone, down the hill, back to the fields, she speaks to all those who, like him, faced death because they believed in life – theirs and that of others. Words take their shape again: freedom, solidarity, unity.

Here, in the fields where they work at night to avoid the excruciating heat of the day, these same words unfold differently, expand in new directions. Here, just like her body rocked in rhythm with those of her comrades on the square during protests, like her hands clasped into their shoulders to form long human columns that made her feel like their hearts beat as one, her movements follow those of others as they plough the earth in concert.

In the years between the revolution and the pandemics, Samah had passed a lifejacket over her head, secured it around her waist, before embarking on a small boat. She prefers not to talk about that part. A world of water, a gulf of anonymity, the cemetery of the unknown. In the whiteness of the sun, the emptiness of the maritime horizon sometimes seemed populated by trees that resembled those of her grandparents’ house. Those carrying cherries, walnuts, and tangerines all year round, and offering freshness during the warm season. She remembers how her grandpa used their shade to screen his plantations from the heat, how he brought the sheep to graze on the pasture around their roots. Just the other day, she was describing to Jacques this meticulously designed garden, where carefully located ponds provided reservoirs to water vegetables, and where each fruit tree was given the vigilant mission to shelter its own small harvest of fresh herbs, strawberries, spinach, or lavender.

On the boat, the terrifying feeling that only a few planks of wood separated her from the endless sea made her feel like her body had become liquescent, and would itself soon turn into water and leak away, returning to the waves, soaking up the salt, and that her soul would remain there, a forgotten marinade for a meal that would never come. When they reached the coast, she and the passengers who remained ran out, water up to their chests, and as they felt their bodies emerging out of the liquid mass, they hurried to the shore, kneeled down and planted their fingers in the sand. They cried tears of salt and felt like the sea was finally leaving their bodies, one drop at a time. She promised herself that for the rest of her life she would cherish the land, caress the earth, root her hands and feet in the soil, ditch, plough, furrow. 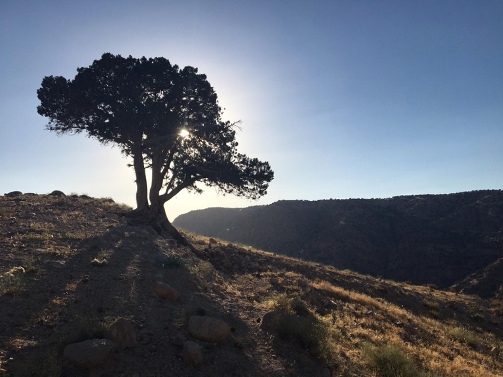 These memories seem like a creation of her mind now that borders are opened. At the beginning of the first pandemic, people stayed home and governments closed borders. Perhaps they imagined that these separations – only existing because they were declared and guarded – would become real, that viruses would recognise and respect them? For a time, everything stood still. When the world started moving again, it was as if people wanted to catch up on time wasted by not destroying it: cars poured into cities, fertilisers flowed onto fields, smoke rose from factories, boats carrying oil spilled into seas, planes forcefully taking away unwanted people left airports…

It was after the third epidemic that the world got back on its feet, Samah tells people too young to remember. Deep inside, she shares their bewilderment when they ask, incredulous and, perhaps, judgmental: “but how could it go on for so long?!” She recalls the attempts at creating alternatives that failed during the pandemic years – the petty interpersonal tensions and dramatic fallouts, the divides over diverging ideological lines, the egotistic characters and exclusionary attitudes, the indifference in front of death and exploitation, which all continued as new diseases broke out, each time taking more lives away, picking among those most exposed by poverty and exhaustion. She remembers the escalation of repression and violence and the same anger pounds in her heart, the tak-tak-tak-tak of axes accelerating its tempo – there seemed to be no exit door, no way to extract herself from the chronic and deepening cycle of devastation.

The third epidemic was by far the most brutal: population plummeted and, over time, structures decayed. Shops closed, schools stopped, offices were abandoned. Food was hard to come by. When there was electricity and she could watch the news, she heard – first with disbelief and increasingly with the nonchalance of habit – about institutions being dissolved: garbage collection was interrupted first, then public transportation. Then, it was announced that there weren’t enough individuals of working age to keep armies and police forces. The news stopped. “Our priority is to ensure nutritional and medical continuity,” the authorities stated. People were placed into agricultural labour camps or mobilised to provide healthcare. In the camp, Samah heard, petrified, about farming sites nearby turning into mass graves as diseases struck labourers, leaving no one behind.

When young people eagerly ask for tales of the years before the establishment of the valley cooperative, she focuses on their climax: “Us, agricultural workers, were the first to rise. Health workers soon followed. At first, the repression was merciless: they burnt the land to starve us and choke the revolt.” “But” – (she smiles) – “there were not enough of them left; especially men, the diseases had hit them more forcefully. It was us women who led the movement. By then, surviving policemen, guards and soldiers had become laborers, they fought with us.” She doesn’t mention how, when victory was declared, she had lost any sense of its meaning, any trust they could build things anew, freed from the horrors of the previous decades.

She remembers how anxious they were, fearful of any collective formation that could again turn into endless dispossession. She simply glosses over this period, referring to it as “the autonomy years”. People attempted to live outside larger social structures: alone or in small groups, in abandoned farms and homes, producing their own food and energy.

During those years, she decided to return. Jacques went with her. She saw the square again, visited her grandparents’ house. Following her grandpa’s farming techniques, they slowly brought life back to the parched land. There, she planted a tree in memory of Khaled.

Rebuilding social ties was the hardest part. When they established the valley cooperative and started welcoming laborers who wished to join, the solidarity and education committee firmly inscribed into its programs the apocalyptic story of the previous world. “We need to remain careful; history can always repeat itself.” The youth listens enchantedly. She pleas, “The only guarantee we have is our vigilance and dedication.”

Acknowledgments: With warm thanks to friends Pinar E. Donmez and Adriana Ahmad Qubaiova for sharing idea(l)s, and to Maël Galisson for the photo.

Céline Cantat is a postdoctoral researcher at Sciences Po Paris.