Today you came home from school and asked me what a “tank” was. It is 2035, so you don’t remember that in 2020 imperial powers used the cover of Covid to escalate military operations worldwide: drone strikes, theft of indigenous land, and police brutality. You only know that tanks are “extinct,” and that there are old pictures in your schoolbook of us dismantling them. This is the story of their extinction:

It was not just because of the horizontal six-feet rule. The vertical one, too, did something. So much grave dirt was dug during the pandemic that the testimony of the dead took up space. It made way for other voices, too. Like yours.

In 2020, subtle things signaled a change. There were grumbles about surveillance software in homes, and protests over police brutality on the streets. A collective disenchantment with “security” bubbled. Even top military officials started speaking out: divesting from “security” was the only way for anyone to survive. People had enough of black and brown death, enough femicide, enough of being impoverished by military spending.

Then, one day, something big ignited from the repressed and chilled silence of the dispossessed. It started with the sound of little girls’ voices.

Middle class adults, working from home, had rediscovered how shrill, tireless, and righteous a small child’s voice can be, and came to respectfully regard the revolutionary potential therein. In the USA and Europe, it became popular to give little girls megaphones as gifts, not only as a pop-feminist thing to do, but also because physical distancing instigated a new kind of voice-making and space-taking. The trend globalized rapidly.

Little girls from all over the world started taking bold leadership, agitating right and left in their communities. In some neighborhoods little girls were the first to bear witness to police presence, taking officers to task if they abused their power, shaming them, and calling upon the officers’ mothers to retrieve them from the streets. In countries where police still carried lethal weapons, forces were systematically disarmed by municipal protestors. Little girls surrounded police headquarters with megaphones blaring their voices until they surrendered their arms.

Global connections surged. Fearing very little, not even the threat of death, little girls armed with megaphones and the solidarity of their adults, started calling on their communities to tear down the structures of militarism. (This is why your megaphone has a sticker on it that reads, “COVID: Communities Organizing Vital International Demilitarization.”)

One day in Minneapolis, a young Somali-American girl darted across the street and kicked a tear gas cannister back to the police1 . She lifted her megaphone and declared: “The structures of destruction must be destroyed.” The scene—caught on video—went viral and became an icon of the moment.

Almost overnight, an insurgent flame lapped at the edges of bases, detention centers, national borders, prisons, police headquarters, nuclear facilities, and the Pentagon. It was a swords-into-plowshares moment: because young children are often quite literal, demilitarization was no longer an ideology or theory of change. Demilitarization became a mass physical action. 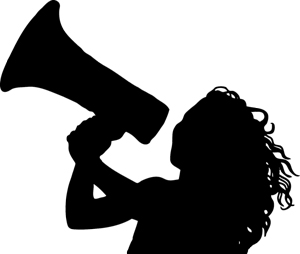 From the Middle East to the Horn of Africa, little girls marched up to imperial military bases occupying their communities, and with the help of their adults, evacuated military personnel. Most soldiers defected at will, reclaimed by their daughters to come home.

Detention centers from Italy to Israel closed immediately, and borders opened swiftly, as little girls with megaphones demanded reunification with their families. (Nights were long and noisy for those officials who took awhile to realize there was no silencing the stubborn voices outside their windows.)

Simultaneous transnational prison riots were met by children on the outside, who broke open the gates with their parent’s tools. Formerly incarcerated people found themselves housed and employed, because sweeping policies to defund militarism, starting with the private weapons industry, redirected resources to everything else.

In their hometowns, people destroyed Bearcats and other repurposed military machines in large ceremonial events. These ceremonies, which started in Mumbai, were offerings to the dead, whose names were read and remembered. It is through this ritual, my daughter, that tanks became extinct.

Some called all of this an insurgency. The majority could finally breathe for the first time in centuries.

And it did not end with the “structures of destruction being destroyed.” Because of their limitless imagination, little girls like you designed the restored future, the one you live in now.

A demilitarized world was difficult for adults to imagine, but we worked hard to implement the ideals of our young lionesses. Adults took on policy reform at the behest of their daughters. Some ran for elected office, others put aside their legal practices to write the laws required of them, and still others maintained political pressure on leadership to see the laws were ratified and implemented. COVID: Communities Organizing Vital International Demilitarization brought about these policies:

• The Decarceration Act revoked land tenure for international corporate havens and military bases globally. The act also defunded prisons, blacksites, and detention centers. This was a prerequisite for full implementation of the Land Rematriation Act.

You see, before you were born, both private companies and military bases from certain countries could occupy land in other people’s communities with almost no regulation and often without permission. And there was a time when thousands of human beings were locked up in places all over the world, sometimes for their entire lives and sometimes in secret. At a very dark time in history, there was even a profit to be made off of this.

• The Right to Privacy Act repealed vestiges of the Patriot Act in the US, and similar policies in other countries. This included banning surveillance software and hardware, as well as the automatic use of personal data (aka Big Data) installed in regularly used technologies, after Zoom leaders were tried in the ICC in 2022 for violating the privacy expectations of users.

You might remember hearing stories about how governments and companies could spy on you without you even knowing, even without a warrant. Sometimes it was just to advertise to you and steer you to buy certain things. Sometimes it was to preemptively arrest people or justify state alibis in case you were killed by a drone or a police officer3 . And sometimes it was used by employers to bust up unions. It was called “psych-ops” when surveillance software was used to shape public mass emotion and curtail popular resistance.

• The Land Rematriation Act returned major swaths of land in North and South America, as well as parts of the Middle East, to indigenous communities. The same act also established a reparations framework for redlining and urban renewal practices that dispossessed poor communities in Europe, the Americas, and Asia.

As you know, this is still ongoing. The process of reparations and rematriation is also a big part of the movement for global ecological restoration. Many formerly wealthy people are very angry about it, especially since lethal force cannot be used to mow over the will of people protecting their land, water, and air. This will be the fight of your generation. Always remember that the relationship between human dispossession and ecological violation are united.

• The International Disarmament Program funded safe decommissioning of nuclear weapons programs and enacted 360-degree investigations into weapons sales and extrajudicial killing by drone or other means: this means that all countries are meant to be held equally accountable for military violence. The same act also systematically retrained newly disarmed police forces in harm reduction and retrained military personnel in public service work.

You won’t remember this, but when you were a toddler, the military and the police in many countries carried weapons that could kill people, and their primary function as organizations was to exert the threat of lethal force on behalf of the government in the name of “security.” That must seem so strange to you now, since so many former military personnel and formerly incarcerated people around the world are now all public servants who deliver mail, teach in schools, build roads and bridges, grow food, give medical care, and so on.

Those were just some of the policies that got started because of very loud little people like you, who never stopped speaking up and never stopped even when they got tired, even after the physical work of demilitarizing was done. There is a long way to go still, but that, my daughter, is how tanks came to appear in your schoolbooks as extinct.

[1] As described in Zareena Grewal’s [real] Facebook post about the inspiring moments of courage in confrontations with Big Militarism. [2] The controversial Citizen’s Drone movement, spurred by activists in formerly colonized countries, changed the conversation about who has the right to vertical space. This was fomented after the Drone Scandal of 2020, when top US presidential candidates were revealed by citizens’ surveillance drones to in fact be robots programmed by the sex-doll industry, known for its lifelike –but handsy– humanoid bots. In the US, because the presidential election was revealed as a whimsical form of entertainment, the people focused on electoral politics differently: most federal policies started in cities and became nationalized later. [3] When I was a young woman, it was not uncommon for unflattering photos to be posted of African American men if they were killed by police. This was meant to sway public opinion and justify their deaths.