This should be Year Zero for universities in the United States. Cancel school for the upcoming year and pay staff, faculty, and administrators to reimagine our curricula for this decolonizing, environmentally-threatened, pandemic moment. This would require decolonizing the staff, faculty, and administrators first. All of our would-be students can spend a year serving their local communities as newly deputized janitors in a Legion of Janitors, ensuring that people are covering their noses with their facemasks and leading investigations into their local polluters.

This Legion of Janitors would be led by our current janitorial and sanitation workers, newly empowered to clean up the excesses of neoliberalism and instill a more communitarian social order with intense attention to public health. Their work in the Legion of Janitors will be supported by a decolonizing curriculum – offered online – focused on giving students the knowledge they will need to institute a new regime of human-nature relations. At the heart of our current problems – of which the pandemic is only a symptom – is an impoverished conception of nature that informs both how we act within our environments and how we interact with each other. Equally important in instilling a new understanding of nature is an understanding of the germ theory of disease and the nonbiological basis of race. When the students come back to school, they’ll have a newfound understanding of how disease works and how centuries of racism compound its effects.

Year Zero would teach us to valorize janitorial work. All the talk of essential workers has somehow ignored how essential janitors are for our collective well-being. Maybe it is obvious that any class of people who handle other people’s trash will not be considered essential or that the racial, ethnic, class, and immigrant status of many janitorial workers compound this lack of prestige. But given what needs to be done every day to ensure that people remain healthy, it seems essential to have people to wipe down public surfaces – knobs and handles, desks and tables – to clean up the viruses that might spring from surface to person. People to empty the trash, mop the floors, and change air filters. People to do all the hygienic work that individuals fail to do for themselves; or, maybe, to help resist the need to neoliberalize public hygiene as something that each of us must do for ourselves with our personal toolkits of cleaning supplies that we carry throughout our days outside of the house. Janitors as stewards of the common good, Legionnaires in the service of cleanliness and equity.

Year Zero would also welcome in a new curriculum for liberal arts in the age of Spaceship Earth’s hurtling into the future.1 Instead of a liberal arts education, focused on the grooming of the individual, universities would move to an education in communitarian arts focused on the well-being of the community, the ecosystem, and the planet. It would also focus on the germ theory of disease, which seems to be lacking for many adults, as they fail to cover their noses with their facemasks or resist masks altogether. It would teach them the history of how disease has been used to vilify populations and also how germs actually work – and what works to reign in symbolic and epidemiological violence (Proctor 2000). Students-turned-janitors, under the tutelage of the Legion of Janitors, would learn about structural racism, its effects on urban populations and their access to healthcare, and how failure to address epidemic disease in one space leads to its spread to others. They would also learn about environmental degradation and climate change and how they are helping to produce the conditions for more epidemic disease and its spread through the technologies of globalization, like carbon-intensive forms of travel. 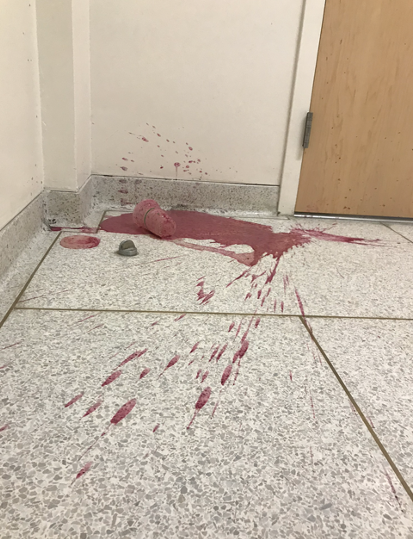 But maybe janitors would need to have more explicit power for this dream to be realized. In the 18th and 19th centuries, “medical police,” in one form or another, were popular in Europe – though they were absent in the United States (Wolf-Meyer 2018). They were tasked with ensuring public health and could fine people who didn’t clean up their properties, since miasmas were then seen as disease vectors. With the germ theory of disease, disease became more an individual concern rather than an environmental one; but maybe it’s time to swing the pendulum back to policing the environment and empowering janitorial staff to do something more than just clean up messes. Maybe they need more proactive powers.

Invoking the expansion of powers for any group might be a little suspicious these days, but given the relative lack of prestige associated with cleaning up other people’s messes, let’s empower a Legion of Janitors to shut down house parties and industrial polluters, to ferry the obviously sick to clinical care or home, and to fine administrators for failing to protect students and faculty.

The turn to a communitarian arts degree would also inform schooling more widely, ushering in a new way of thinking about human relationships to the natural world, which are intimately enmeshed with our relationship to time. For over a century, Americans have been wedded to the idea that the school year should follow some natural, agrarian model where children could be home for the summer to help with the maintenance of family farms. In some imitation of an agrarian life, during the school year, children (and their parents) wake with the sun to attend school early, and then come home in the early afternoon to help around the imaginary farm before dinner, bedtime, and the repetition of the cycle. That agrarian model of everyday life – and circannual rhythms – structures how certain students and families are framed, often implicitly. Inability to pay attention in class or to attend school in ways that conform to normative schedules subject students and families to administrative policing. It makes some kids and families dirty by association with nonnormative ways of ordering their lives. Maybe that’s a little too Mary Douglas (2002), but that dirt-by-association logic undergirds so much discipline in the United States that it’s hard to ignore, especially when compounded by whiteness and racism.

The modern school has more to do with the neoliberal, corporate workday and the control of urban, industrial populations than rural, agrarian ones: the school day does less to keep kids out of the dirt, than it is sustaining of a system wherein some kids are made dirty through their interactions with institutional norms. When economists or politicians suggest that it is time to send kids back to school, they invoke the easy alliance between capital and domination: how putting kids into school is an attempt to keep them – and society – clean. The modern school has always been – first and foremost – a form of state-sponsored childcare to enable the adult population to work out of the house. It also trains kids into sweet, little biopolitical subjects, concerned with individual production and social reproduction, rewarding those who become orderly and clean little citizens and punishing those do not. Any call to reopen the schools is also about the need to integrate children into the economistic-individualistic neoliberal order that reifies our contemporary natural order. That natural order is as much about the spatiotemporal organization of everyday life, who belongs where, when — and keeping the streets clean of wayward youth. We need to think differently about what to do with our school-aged children; maybe they should be empowered to manage the dirt rather than be the dirt. Teaching students about real dirt – about disease and pollution – and symbolic dirt – like racism and other forms of prejudice — means providing them with the tools to build a more equitable world.

Can you imagine the Legion of Janitors and their student-janitors, a newly empowered and freshly educated army of environmental zealots, preaching a new/old gospel of germs? Small groups of teenage inquisitors under the tutelage of seasoned janitorial staff, set loose to reign in the excesses of neoliberalism and its antiquated, colonial conception of nature. How has it come to this, that I would rather the terror of environmentalist, public health neophytes over the haphazard governmental response of the Trump administration?

The Legion of Janitors and their newly educated student-janitors will be neatly dressed in a formal dishevelment, adorned in the symbolically-coded colors of dirtiness as they clean up the excesses of the neoliberal order. Blood and shit, snot and pus. Red and brown and yellow-white. Uniforms that trade on the power of the abject, at once instilling some fear of the Legion and training the student-janitor Legionnaires in an understanding of the history of the symbolic uses of color. A legion of the abject, bound together through their shared mission of cleaning up the neoliberal order and installing a new regime of nature, might emerge on the other side of their experience with a sense of generational shared purpose, a commitment to changing human nature for collective betterment.

Wolf-Meyer, Matthew. 2018. “Policing Shit, Or, Whatever Happened to the Medical Police?” In The Anthropology of Policing, William Garriott and Kevin Karpiak, eds. Pp. 54–71. New York: Routledge.

Matthew Wolf-Meyer is the author of The Slumbering Masses: Sleep, Medicine and Modern American Life (2012), Theory for the World to Come: Speculative Fiction and Apocalyptic Anthropology (2019), and Unraveling: Remaking Personhood in a Neurodiverse Age (2020), all published by the University of Minnesota Press. His research focuses on the biology of everyday life and how biological experiences interact with the expectations of U.S. institutions, particularly around questions of race and disability. He is faculty at Binghamton University.