The most recent chapter of Civilizational pandemic is but a heightened condition of the normal for those already targeted by anti-Black, racial-colonial domestic war. While Civilization’s managers and entitled inhabitants fret over the tedium of their immediate national futurity, abolitionist solutions, cures, and communities unfold in the dark echoing of the true problem solvers (the children, the students, the elders, the shamed, the punished, the sick, the crazy—or so they say). A Black radical abolitionist common sense coheres as a byproduct of cultural-juridical-military statutes that constantly reconstruct and affirm the anti-Civilizational profile: criminals, terrorists, deviants, and aliens have always been around, some longer than others, and there is little mistaking the Black and Aboriginal common denominator in all of it. The problem solvers are led by the Black abolitionist revolt, instructed by the Indigenous anti-colonial insurgency, both of which enact new geographies and moments of origin as pandemic casualties seamlessly coalesce with police killings and ecological genocide.

An abolitionist understanding grows and spreads: the anti-Civilizational is an honorable inheritance, because it surges into domesticities that are always again frontiers; the plantation is an idea as much as a place, which is why it never goes away, territory (land) is always invoked, and it all materializes in the endlessly justifiable homicide that defines “freedom’s” limits. Move, then, to the margins of the reputable, just beneath the high ground, flourishing in the tears and sobbing, studying within the mourning and grieving, theorizing the pain, it’s already happening, and it needs no refinement.

The “free world” statecraft of pandemic casualty (mis)management stretches and multiplies the protocols of immobilization, capture, and state surveillance into seemingly novel (and ostensibly benevolent) forms: state and county sheltering orders, contact tracing, quarantine, social distancing, cell collection, and hyper-exploitation of “essential workers.” Further, the lived realities of state incarceration—in prisons, jails, detention centers, etc.—have been made far deadlier by the carceral logics of sheltering, population containment, medical neglect, and racially distributed viral vulnerability. This still-emerging coronavirus world awakens a carceral revelation that is old news for some: prisons, jails, and detention centers are not merely brick-and-mortar sites that establish the internal borders of juridical unfreedom and normalized Black subjection to state violence, they are also the template of interpersonal, systemic, and (generally militarized) spatial power for the everyday institutional and cultural normatives of (white, multiculturalist, “postracial”) “freedom.”

Amika Tendaji, co-founder of Ujimaa Medics (UMedics) in Chicago, recently stressed that the Covid-19 pandemic unleashes yet another round of confirmation that “for Black folks… help is not coming, and the closer you are to Black, the less help is going to come; so we have to take care of each other, figure out autonomous systems… we are all we have.” This is why, for UMedics (founded 2014), the emergency life-saving skillset of gunshot wound treatment and asthma triage is understood—and actively, popularly taught—as a Black radical praxis, and not merely as a stopgap measure to plug systemic anti-Black state neglect. This intimate, fleshly labor is a collective Black modality of autonomous, liberated life that disrupts as it exposes the genocidal logic of pandemic in a Civilizational order that is—and has always been—a state of asymmetrical war.

Pandemic is neither universal in its consequences nor common in its scales and intensities of coerced misery, suffering, and mourning. Despite the claims by the United Nations, we are not “all in this together.”

(Full disclosure: I am a relatively class privileged US-born Filipino, but I know that my relationship to unexpected and traumatic death, disease, and displacement is some Third World shit. Feeling and seeing how tyranny, coloniality, and global racism/anti-Blackness turn loved human beings into corpses all the fucking time is, well, it’s a fucking thing—and this is what stokes my suspicion when i encounter a white/multiculturalist consensus that claims a shared approach to shared vulnerability. None of it is really shared, not even the sense of vulnerability.) 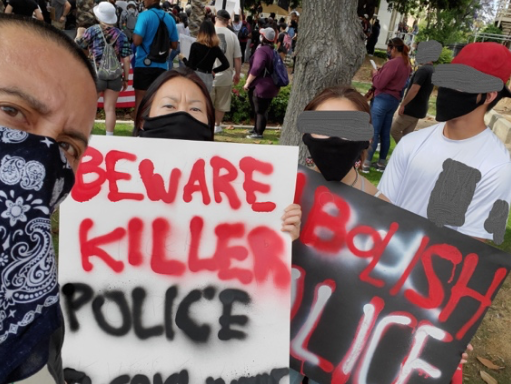 Considered through an abolitionist analysis/imagination, the (anti-)social condition of the Covid-19 pandemic reveals the foundational carceral anti-Blackness and racial-colonial violence of the United States. Here, i will define the notion of carceral logic as a form and method of social power and domination that produces the containment, selective immobilization, and/or eviscerating isolation of populations, communities, and cultural geographies through a combination of state and extra-state maneuvers, including but not limited to policing, legal segregation/apartheid, surveillance, housing policies/practices, electoral gerrymandering, financial redlining, and actual or threatened gendered racist, anti-Black, trans- and homophobic, and colonialist violence. Carceral logics are not limited to sites of state incarceration, and permeate the distributions of suffering and survival amidst disaster, pandemic, and economic collapse.

State and corporate alliances in and beyond the USA allege a shared intent to stem the casualties of the Covid-19 pandemic while managing the consequences of racial capitalism’s serial implosions under the weight of white-collar fraud, extreme wealth concentration, constitutive (and translocal) white nationalism, and various of its other inherent characteristics. This allegation of shared intent is no mere bullshit—it must be addressed as an attempt to extend the reach and sophistication of asymmetrical carceral war. Casualty management forms the premise for national-to-global debates about the best approaches to “flattening the curve,” “reopening the economy/country,” and, often quite explicitly, reviving the vibrancy of White Being as a violent, militarized, and culturally intrusive production of entitlement to bodily integrity, actuarial lifespan supremacy, and access to freedom of global movement.

Tendaji’s analysis of the Covid-19 pandemic further demystifies the notion of state neglect as another of White Being’s rhetorical artifacts: is it truly “neglect” when the historical racist state has never failed to organize and reproduce proto-genocidal protocols of state-absence, evacuation, and economic underdevelopment for Black people and places? UMedics’ work not only flourishes as an insurrection against the numbing normalization of Black Chicagoans’ subjection to state-facilitated casualties produced by toxic, institutionalized environmental, police, and intracommunal violence, it is also a radically transhistorical Black organizing practice that convenes an abolitionist tradition lush in historical roots and always in the moment of remaking and revitalization. Following Tendaji and others on the abolitionist front lines fighting against the pandemic’s carceral violence, my modest intent here is to reflect on how the unfolding Covid-19 casualty, triage, testing, and (it is hoped, eventually) vaccination measures illuminate (1) that the primary logic of (US) state power is to plan, assess, and enforce the selective neglect, criminalization, and punishment of targeted populations as the precondition of its emergency care, epidemiological, and health provision protocols; (2) that the genocidal and proto-genocidal logics of anti-Blackness and racial-colonial violence are sustained and further normalized through the spreading carceral organization of the Covid-19 world as well as its anticipated aftermath; and, (3) that an abolitionist society is one in which vulnerability is neither eliminated nor immunized against, but is instead a radically shared condition in which people thrive, create, learn, and proliferate forms of collective being that remake lifeworlds against the sterilizing and deadly mandates of the half-millenial Civilizational text.

Abolition is, above all else, a creative praxis of human being that constitutes sites and methods of insurgency against the oppressive Civilizational mandate of White Being1. Centered in Black liberation struggle against the world-destroying (and capitalist nation building) social-political order of racial chattel, contemporary abolitionist struggle addresses the power of incarceration—that is, the carceral form of Civilization—as a social-historical totality, crystallized in but not reducible to the institutional sites of jails, prisons, detention centers, “reservations,” and concentration camps. Reflecting the unique pedagogical generosity and undying militancy of Black radicalism, abolitionist praxis is both shaped by and in critical dialog with queer, feminist, Indigenous and Aboriginal self-determining, anti-colonialist, and Black liberationist (including nationalist, anarchist, socialist, and liberation theology) traditions of all kinds.

As has been made clear by the pandemic, abolitionist praxis is only fractionally represented by the work of decarceration, carceral escape, and/or guerilla and grassroots actions to set people free. Abolition is a song, a flexible paramilitary strategy of collective defense and (proto-) revolutionary action, a cooperative economy of survival, a health and caretaking infrastructure, a guiding principle of maroonage, and a production of peoplehood that ruptures the epidemiology of deadly viral spread of all kinds (from HIV to Covid-19) while apprehending disaster and disease as emergent fronts in an ongoing war waged by the institutions of White Being against such insurgent flourishing. The flourishing is extraordinary because it tells us, in millions of ways, that America (a.k.a. the United States, Civilization, the modern “free world”/First World) has always been a carceral world: its material, cultural, and ideological coherence rests on logics and protocols of targeted bodily immobilization and collective, systemic evisceration, from the slave ship and colonial frontier to prisons, industrial factories, and apartheid segregation. The pandemic illuminates this long historical carceral continuity as asymmetries of death and illness accumulate among Black, Native and Indigenous, and Pacific Islander populations.

As Covid-19 creates new fronts in an ongoing condition of carceral war, abolitionist praxis has the collective life-making capacity to wage a robust, multi-faceted, counter-war of life-making, radical autonomy, (Black) liberation, and anti-colonial counterwar. Perhaps this is another ideal moment in which abolitionist organizers, teachers, artists, scholars, students, and other creators can embrace the urgency, theoretical and strategic rigor, and commitment to liberated life that is poised to address the conditions of an asymmetrical war that can and must be fought and abolished, not just survived.

Consider abolition as an epochal production and future-planning of creative acts, performed by and in the name of peoples struggling to produce their own integrity as such. Embrace the obligations that accompany the term—a declaration of creative (and periodically counter-militarized, guerilla) war that remakes sociality, politicality, ecology, place, and (human) being, moving with, against, and through the asymmetrical vulnerabilities and casualties created by the long historical, anti-Black chattel-carceral regime. The possibility of an abolitionist world is a counter-Civilization: a radical distension of “freedom” that defies the modern orders of citizenship, nation-state, jurisprudence and the ascendancy of the white human and its deadly entitlement to normalized physiological and cultural-epistemic integrity.

Most importantly, consider abolition as an art form, the kind of breath and truth that nourishes forms of community that constantly escape the guarantees of the Civilizational plan. In some ways, this is not the time to insist on the renewed urgency of a radical abolitionist struggle, because such a time already precedes all of this, and its messengers have gifted us with the poetry, letters, manifestos, collect phone calls, and never-quite-private conspiratorial conversations we share with each other sometimes, but really, all the fucking time.

Dylan Rodríguez is Professor at the University of California Riverside, and the President of the American Studies Association (2020-2021); his next book, White Reconstruction, will be published this fall by Fordham University Press.