The communal house that local residents had built, on a barren plot once designated for Jakarta’s latest megamall construction, has a freshly planted fruit orchard that offers fine scenery for the Fairytales for Fabulous Futures workshop. Today’s participants are a motley crew, with children and youth of all ages, teachers, scholars, shopkeepers, religious elders, council members, journalists, factory workers, taxi-drivers, former bankers, ex-convicts, and a comedian; all personally invited by Eci, a fresh anthropology graduate and today’s host. Eci’s invitation is the only thing we seem to have in common. Yet even before lunch we develop a sense of common soul-purpose, facilitated by a participatory exercise that combines an immersive improv game with a poetry genre from Eci’s ancestral homeland (after decades of military oppression and social engineering this was long forgotten to her generation, but was now revived for its resonance with the present moment). All of us (except for the children and the comedian) naturally falter in our performance of the strange sounds and motions, but it turns out our faltering is vital to help us shed our conventional grammars of think-acting and to absorb the vernacular of the emergent era. Necessarily fragmentary and unfixed, it is what allows us to co-imagine, prefigure, and enact “now-futures,” as Eci puts it, a liminal “present-utopia in fragments” that sustains the actual potential for a transformative, sustainable society. “Whether we fully realize that potential or not,” Eci says, “we still have a fabulous time together trying.”

Eci is one among a multitude of young community actors that are shaping the emergent society in myriad ways, ever since the dying days of the departed era. We became Facebook friends five years earlier, in February 2020, when she sent me a friend request that I immediately accepted on account of 399 mutual friends among Indonesia’s activist circles, as well as her intriguing profile picture that showed her eating a piece of paper (“the Law”), against the backdrop of a rainforest ravaged by the waste of gold mines. Her cover photo featured a soon-to-be viral graffiti slogan from Hong Kong: “We can’t return to normal, because the normal that we had was precisely the problem.” 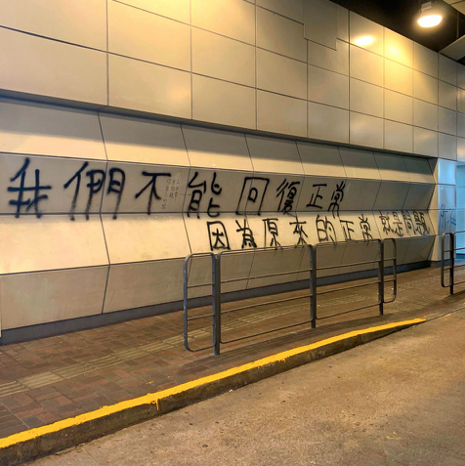 My new friend turned out to be a seventeen-year-old from a small town in Indonesia’s most deprived and violent region, who dreamed of becoming an anthropologist, and she was eager to exchange views on the contemporary relevance of anthropology. I vividly recall her comment on my post about the need for an activist anthropology for the future: “agreed lah [heart emoji] but anthropologists / activists can’t just keep doing the good things we NORMALLY do [wink emoji] even if we keep getting better at doing it [face-with-stuck-out-tongue emoji] we must / can become CONTRANORMAL not in / for the future but now [big smile, raised fist, party emojis].” It was the first time I saw her use that word. Unfortunately we lost contact during the Internet Crash later that year, and once the world was back online 158 days later—still rushing to resume its previous habits and addictions—the mass exodus of Eci’s generation from the social media giants signaled their collapse. Around the same time that governments started suing Zuckerberg for the annulled data mining agreements, Eci was arrested and detained.

Like so many of her peers, Eci was charged with defamation and subversion under the tightened Criminal Code. The reason was an essay she wrote during the Crash, which in its story-form created a buzz even before the restoration of digital communications. “This is a fairytale,” it opens. “Not unlike the fairytales we are used to hearing from the master-narrators in Parliament and Palace, it tells a fiction of future prosperity. But ours doesn’t force you to swallow falsehoods of the powerful few; it invites all of us to become authors and actors in an open-ended story.”

Eci’s tale follows a girl who takes a different route home one day and stumbles upon a strange town that looks faintly familiar but where everything is done differently than the social realities she knows. Instead of frenzied crowds scrambling to make their way to towers of gold, trailed by masses of creatures in visible and invisible chains cleaning up after their mess, she finds the place bustling with a hodgepodge of activities, carried on by a colorful assemblage of beings. Confused, the girl asks each being she chances upon how they live here. Her interlocutors—people of various vocation, heritage, and orientation; non-human animals that roam freely across the town; and spirit-beings animating the town’s magnificent trees and rivers—each tell her of a prosperous coexistence filled with joy, intimacy, and purpose. The girl repeatedly objects, “That’s absurd! Where I’m from…,” and she goes on to describe the conditions in her city of gold, where they have learned to accept inequality, injustice, and violence as an unfortunate but normal part of life. (Eci lets her protagonist name real examples, referencing data reports, which was later used as evidence in the defamation charges against her). The girl’s interlocutors find so much cruelty hard to believe, for they know and understand only their own ecosphere. Only her final interlocutor, a fast-talking but sincere and caring young politician (called “facilitator” in this strange town), responds furiously: “Unacceptable! If that’s normal, we must all act and make it contranormal!” “But how?” the girl asks anxiously, feeling the ground on which she was raised being pulled away. The young politician smiles: “No use asking me for an answer. That’s up to you, my new friend. My job is to listen to your vision, help you connect the dots, and we’ll make it come true together.”

Eci’s tale of a radical otherwise fell on fertile ground among publics long disgusted with the false promises, fraudulence, and fearmongering governing their society, especially amidst the escalating crisis that shattered any illusion of “normal” futures. Even before Eci’s trial made global headlines (“Why the Powerful Few Fear Teenager’s Fairytale”), it spurred solidarity statements from the manifold protest movements that flared up in city squares, public health centers, factories, farmlands, offices, warehouses, schools and universities, and the post-Crash new media channels connecting them, across the Global South and North: “We Are All Contranormal!” The common purpose signified in this slogan kindled a strong sense of affinity among the local struggles, as did the cross-fertilization of their innovative “triple-C (C-19, Crash, and cyber-surveillance)-proof” action repertoires. Intersectoral, intersectional, and intercommunal coalitions became a matter of course.

Big brands tried to jump on the bandwagon, utilizing the slogan to polish their tarnished image among the “Gen Z” target group and mend their profit charts that had taken a steep plunge during the Crash. But the corporate scheme was culture-jammed by the same “Gen Z,” who had seen their protests capitalized on before and launched a crushing campaign to red-stamp the brand logos “Old Normal.” Megamalls went bankrupt, and cancelled mall constructions left behind vast plots of barren land. Contrary to the dreadful scenarios painted by the elites, local economies reinvented themselves with remarkable ease. Abandoned megamalls were repurposed as culture centers—housing libraries, art spaces, concert venues, and green science labs—and barren plots were re-appropriated for communal housing and fabulous grassroots events.

The speed of transformation was unthinkable in the calamitous years 2020 and 2021. But not so for Eci and other soul-rebels of her generation, who embodied the vernacular of “now-futures” and knew how to articulate it in story-form, capable of enchanting millions, long before it became common discourse. Their prescient confidence in the certainty of systemic change bolstered their protest movements’ resilience, rendering futile the desperate attempts to repress and appease them. When Eci and others detained on similar charges were released and offered positions in a yet-to-be-established Youth Assembly as part of the yet-to-be-reformed parliament, they laughed at the suggestion of joining an “obsolete system” that was “better left to rot.” Today, grassroots assemblies are preparing for new systems of governance to replace the collapsed regimes. Eci, meanwhile, is combining her political work with the pursuit of her dream of becoming an anthropologist—as if she ever was not one.

In 2035, Eci defends her splendid PhD thesis on “Abolishing the PhD: Indigenous Inspiration for an Equitable Academia.” She accepts the title in honor of her elders, especially the women, whose ancestral stories inspired her creative foray into the revolution fifteen years earlier. The ceremony is held at the small sister university in her home town, so that her elders can proudly watch her explain her thesis in the connective vernacular that all those present understand. Besides teaching at this university, as the recently elected coordinating facilitator at her district Eci makes daily visits to once neglected urban neighborhoods and remote forest villages, where she holds consultation sessions and participatory workshops to connect the dots of her community’s utopian visions.

When I accompany her to one of the former sites of plantation and mining megaprojects, which the rainforest is starting to push back into dark memory, I faintly recognize the spot where seventeen-year-old Eci must have taken her profile picture. I ask her if she remembers taking that picture. “Yeah, that’s when I became aware of the absurdity of the toxic reality we lived in, and the need to revolt and change things.” She falls silent for a moment, and listens to the forest sounds. “The world did change, it’s beautiful. But I know now that it’s an ongoing collective struggle.” We spend the afternoon fantasizing about anthropologists’ contributions to dismantling the remnants of toxic normalcy.

Yatun Sastramidjaja is Assistant Professor in Anthropology at the University of Amsterdam. She studies youth activism at the nexus of new technologies and democracy struggles in Southeast Asia.