Bombarding Borders (So to Speak): Against a Bleak Prognosis of Migration Governance in Post-Pandemic Times

Since the outbreak of Covid-19, reports on wildlife reclaiming locked-down cities have flourished in all corners of the globe. You might have noticed that, albeit to a lesser extent, news about unidentified aerial phenomena —UFOs by their ordinary name— have also proliferated. Between you and me, this is no mere coincidence. But allow me to further elaborate on my assertion.

In 1956, Narciso Genovese visited Mars. Previous contact had convinced him and his team of fellow scientists scrutinizing solar energy that technologically ultra-advanced, idealist Martians were willing to study our planet and provide details about theirs with the purpose of contributing to the peaceful development of humanity. The extraterrestrials argued that, out of greed and egoism, humans were despoiling the Earth at a pace that would soon lead to an imbalance in the whole planetary system. Genovese’s renowned book Yo he estado en Marte, first published in 1958, captures the impressions gathered during his five-day expedition to outer space. The text pours out the author’s reverence for a planet whose inhabitants live in natural harmony and social bliss, knowing no class, race, or nationality. Giving away some of his Cold War anxieties, Genovese emphasizes that Martian cartography lacks those arbitrary bland lines that signal and impose hatred among us: political borders. The alien living system he depicts —one in which nature is conceived of as a common good, where land is equitably distributed for subsistence, and exploitation of many by a few is ruled out altogether— impels him to deplore terrestrials’ limited spiritual evolution. In a flare of indignation, the author commits to combating oppression by using all possible moral resources in order to bring forth a better world. Genovese’s account closes by revealing that, persuaded of the desirability of an alliance with Martians, the scientific team accepted sustained financial support for their investigations and, in turn, agreed to cooperate in the extraterrestrials’ Earthnographic project.

The agreement eventually gave rise to a multispecies Mars-Earth League of undercover collaborators, including wild animals and plants, that has striven against mounting injustice to this very day. Actually, data from the long-running Earthnography project show that anthropogenic destructiveness has grown intensively and extensively. Nature has been pushed beyond its limits. Exorbitant wealth/power concentrations and massive dispossession have resulted in permanent warfare and the dislocation of people from the Global South. Refreshed borders in the Global North have become factories of suffering and death. They perform, in increasingly rudimentary and sophisticated ways, continual acts of exemplary detention and deportation against the expendable bodies of humans who venture migration. Inside countries of destination, these new racialized enemies of national security, sovereignty, and identity are doomed to live as “paperless” ghost workers or, at best, as second-class citizens, always lagging behind nationals when it comes to enjoying rights. Under these circumstances, I have been told, the Mars-Earth League is ever more assured that transformation is an imperative, although less under the premise that a better world is possible than in the belief that a possible world is better. Fortunately, unlike League founders, current League members have lived to see shared visions come true. Some of them got to celebrate marriage equality being legalized; others breathed a sigh of relief at the inception of smoke-free air laws, to name but a few realized fantasies whose palpable impact has proved that ideals do materialize. Equally fortunate is the fact that the League’s research has progressed into major nanotechnology breakthroughs. Although I could not possibly dwell on technicalities, you might want to know that League scientists have managed to synthesize a powerful floral nano particle, designated G after Narciso. Capable of bombarding subatomic bonds and inserting new information at the smallest levels of matter, particle G induces a large molecular reordering that makes it possible to alter the structure and functions of any target portion of reality. A protocol for its application stands ready, awaiting propitious spacetime coordinates for G to make its transmutational debut. 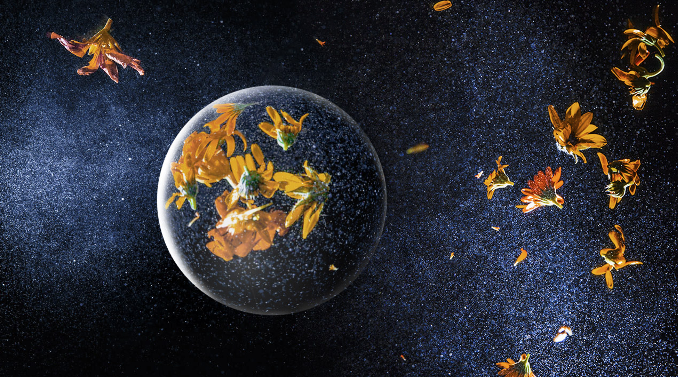 And here is where Covid-19 comes into play. You are undoubtedly aware that the declaration by the World Health Organization of the virus as a pandemic has triggered an unprecedented global situation. Most national States, de facto local crisis managers, have rushed to enforce varied lockdown rules, travel bans, and border shutdowns, bringing international mobility almost to a halt. Foreigners’ chances to enter national territories have dramatically diminished, while people on the move are facing enormous difficulties in returning to their countries. In sum, large contingents of people got “trapped” within the borders of countries of which they are non-nationals, demanding basic conditions to comply with public health measures. And, not surprisingly, States have mainly tuned their responses to a national focus, that is, leaving thousands of migrants out of emergency aid and assistance programs.

Reputable social analysts predict a somber post-pandemic scenario for migration. They foresee stricter borders and exacerbated discriminatory treatment of migrants. Against such prognosis, however, it seems that League members understand that the conditions are now in place to ignite change towards the eradication of callous borders. At least, this is what I infer from the fragments I have accessed of the League’s latest conference proceedings. Take note.

[…] First, our key consultants agree that “flattening the curve” as a collective action has made States aware that successful outcomes depend on “leaving no one behind.” The dilemma has been posed on whether and how to extend support —if not rights— on behalf of the greater good, to people that have so far been denied any protection. The sanitary crisis has foregrounded a sense of the collective dear to our League members. This brings us closer to our goal of eroding the principle of competence at the core of Western civilization, and reestablishing the evolutionary principle of life itself: mutual cooperation. With terrestrials coming to glimpse the need for cooperation as the sole rule of survival, the time is ripe for reinstating ancestral precepts of Good Living across the globe and, concomitantly, instituting the conception of Earth “inhabitants” as rights holders.

Second, during the pandemic, the nature of migrant labor has shifted from “problematic” to “essential.” Several consultants have expressed perplexity at governments entertaining the unthinkable, such as rapidly validating degrees of now indispensable migrant workers or even starting regularization programs. Political will has made it evident that administrative barriers can easily be removed in order to solve State-created problems. It has laid bare how, under exceptional circumstances, States promptly devise innovative solutions for pre-existing as well as emerging inequalities. We believe that a step has been taken in the direction of finally dismantling bureaucratic machineries that (re)produce evil distinctions between nationals and foreigners to exercise control and domination.

Third, the pandemic has put migrants’ organizational capacity to the test at several levels and the results have aligned with our aspiration to see the oppressed articulate an unignorable resounding voice. Migrant associations throughout the world have taken up solidarity activities together with urgent lobbying for inclusion. They have speedily drafted reports, outlined demands, and discussed solutions relying comparatively on auspicious initiatives and legislations worldwide. They have also coordinated agendas and launched joint campaigns with other civil society players on all scales, from local to global. This emergency practice has enhanced the value of grassroots trust relationships and solidarity networks, and boosted the political voltage of migrant social activism. The way is paved for migrants’ voice to be recognized by a wide range of actors as a driving force behind influential planetary movements against a strangling development model.

Fourth, Covid-19 has pushed the experience of borders closer to the most privileged, giving them a taste of their own necropolicies. Countless tourists stranded abroad have reported desperation on finding themselves temporarily excluded from State assistance. Likewise, through hospitalization, confinement, or sheer fear, Covid-19 spikes might have pressed many into getting a sense of the distress migrants suffer at either side of suffocating barbed-wire border fences. This novel sensitivity may stir up opposition against unacceptable border security expenditures in the thick of economic reconstruction. Above all, it draws near the League’s foundational dream of reshaping violent borders. We trust humanity is a heartbeat away from turning borders into rest areas for mobile people, joyful sites of horizontal encounter and exchange. And it will not be long before the fortuitous and uncontrollable intermingling of diversities brewing within borders sets the tone for the kind of relations that will prevail in the livable world we envision.

In the light of the aforementioned, we, members of the Mars-Earth League, unanimously consider that the border issue has gained momentum and that our timely intervention would magnify the transformative potential precipitated by the pandemic. We extend our gratitude to those outer space and wildlife partners who have collected intelligence throughout lockdown, and proceed to declare that:

Acknowledgments: To Judge Gabriel Chausovsky, for his unorthodox teachings on how to sort out certain Kafkaesque problems of this world.

Corina Courtis is Associate Professor at the University of Buenos Aires and Researcher at the Institute of Anthropological Sciences and the National Council for Scientific and Technical Research, Argentina. She currently works on migration policies and management practices.