Pakistan | Photographing the Virus: Visuality, Publics, and Ethnography during Covid-19

In the fall of 2019, I began my study of the myriad ways in which one of Pakistan’s commercial port city Karachi’s oldest and largest working class neighborhoods, Lyari Town, is represented in mass media. Often in the news for gang violence and urban strife, the neighborhood is also famous for producing notable boxers and footballers, some of who are of African origin. Lyari Town has a history of migrations in the western Indian Ocean between South Asia, the Persian Gulf, and East Africa. In order to examine how the neighborhood was represented, as well as how its residents used media visibility, I situated myself among athletes in boxing clubs, as well as in vocational centers working for the empowerment of women as the neighborhood saw an end in urban violence. As part of my fieldwork, I was helping the vocation center organize a workshop on mobile journalism. We were to invite photo journalists and photographers from Karachi to give practical training to students on how to use their mobile cameras as tools of practicing local, community journalism and, even more simply, how to take good photographs. They were taught what angles to use, how to deal with people’s resistance to being photographed, and using creativity and consent to tell a photographic story.

With the onslaught of Covid-19 doing any kind of face-to-face ethnographic work became an impossibility. The government placed lockdowns, sports clubs and gyms were closed, and athletic events were postponed until further notice. As remote learning became the new norm to cope with the pandemic, the vocational center also decided to shift its classes to an online platform. We were to meet once a week as per usual on Go-To Meeting. The center decided that a good assignment for students was to photograph lockdown in their neighborhood, to photograph how far social distancing measures were adopted and followed in a place that was home to daily wage workers, and also to photographically journal daily life at home. The organizer of the workshop told me that this assignment would be valuable as it would document how the neighborhood deals with this pandemic that has taken the world under its grips. His remarks pointed to the ways in which photographs are timely objects not only in the present, demonstrating how an event is currently unfolds, but also that they are historical. As documentary evidence, they will capture what Roland Barthes (1977) called a “having been there” of an object, place, or time.

For a student of media anthropology, visuality was already a social fact (Foster 1988). However, it took on a renewed methodological significance. On our weekly calls, we discussed at length what it meant to photograph the virus and what were some of the key signifiers of a virus. Even when there was a failure of the digital media platform due to weak WiFi signals and/or the lack of pricey mobile data packages for students, there were lessons in ways to adapt and think about accessibilities of various media ecologies. In the power point presentations shared on the students’ smart phone screens, I put up a number of photographs circulating in newspapers, websites, and social media platforms which showed social distancing measures adopted in various parts of the country. The most iconic were the circles marked on the ground wherein people stood at a physical distance from one another to collect groceries or to claim rations distributed by the government and other social welfare foundations. Students showed photographs of vegetable sellers, butchers, and fish walas who sat in front of locked up storefronts. Only essential items like meats, vegetables, and bread were allowed to sell in bazaars. 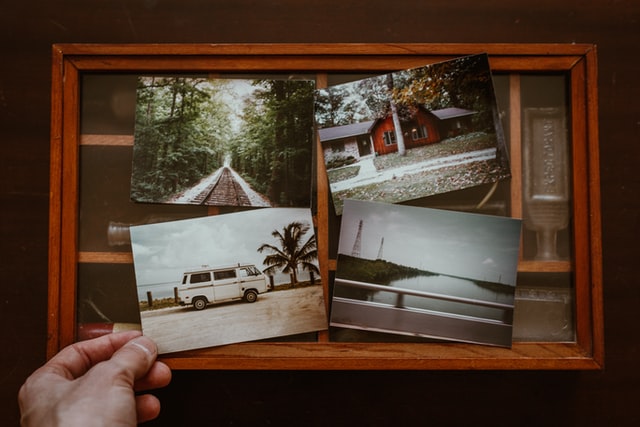 One student presented her own photographs, painstakingly pointing out the name of each empty street and deserted main roads she had walked through. She produced an archive of neighborhood restaurants and cafes that were usually teeming with customers, places where mostly men socialized, having their evening gupshup (conversations) in pre-lockdown days. Now the shutters on these cafes were lowered and they were closed for business. Even while talking about these photographs, she reflected on the past. This was the affective prowess of photographs. Even if the images didn’t show how things once were, photographs brought back memories of a recent past where the visual-scape of the neighborhood was quite different and these key locations were frequented by residents. In another session, I asked her how she might organize these photographs in the form of a photo essay. She suggested that it can take the form of a photo-walk: walking through empty streets, capturing the deserted sights and sounds in real time. This method of organizing was strikingly ethnographic and showed the value of the visual in showing the social effects of the virus.

One student wanted to write a photo essay on the various awareness campaigns undertaken during the lockdown. She said she wants to start with a more positive image of the neighborhood showing how people were distributing fliers, wearing masks, and were standing in the prescribed circles on the ground whilst buying groceries, thereby maintaining social distance. At the same time, she added a photograph in which a crowd of people was visible who weren’t wearing masks and were standing in close proximity to one another, thereby not practicing prescribed techniques of distance. The student said we can start from a positive stance, but also show the ways in which people are not following prescribed rules. Masks are key signifiers of the virus and are instantiations for ways of being in the world of the virus. A student pointed out that gathering consent will be easier now that people wore masks and their faces weren’t fully visible. The mask-adorned half-visible, half-hidden faces threw a question mark on the very meaning of visibility, publics, and publicity.

Publics are traditionally theorized as discursively produced and disembodied formations. Herein, crowds assume a particular kind of irrationality as opposed to the assembly of a literate, reading public in salons of the sort that Habermas (1991) wrote about. Scholars have argued for theorizing publics as bodies assembling in space, asking for recognition (Butler 2011). During the pandemic, the gathering of people in space points to a certain kind of unruly crowd. It is violating the rules of a government imposed lockdown and almost asking for the imposition of a curfew. Moreover, it is a slow, invisible kind of violence wherein the spread of the virus happens with the gathering of bodies and the lack of bodies, or masked bodies standing at a distance from one another in public spaces prevents the rapid spread of this virus. A student showed an image of a group of daily wage workers sitting on a footpath. She said the photograph showed the plight of workers, unable to find work. At the same time, she said, they aren’t following social distancing, are not wearing masks and that is dangerous. Furthermore, the student’s photo-essay on awareness campaigns was essentially a way to utilize photography as a means to correctly demonstrate civic participation during Covid-19.

Publics, like photographs, also bring to bear particular histories. I scan newspapers daily to see what stories are being reported on the neighborhood, part of my existing methodological plan. One of the English language newspapers published a story on how imposing lockdowns and forcing people to stay at home was proving to be very difficult for law enforcement agencies in Lyari Town. Since it was a working class neighborhood, people lived in low cost housing in close quarters. The streets outside were just as crowded as people’s homes insides, housing many family members and not enough rooms. Residents quoted in the news article also said they have been through lockdowns before. The years of the Gang War, they have been told to stay home. Some residents said they have survived bullets, and so baton charges (an instrument of punishment widely used by the British colonial police in the subcontinent) have no effect on them. The image that accompanied the article on newspaper’s website was one of an empty street in Lyari. It showed bullet ridden walls. Residents had abandoned the area because of ongoing violence. The only photographer who could conduct a workshop at the center was the author of this photograph. She said that this image had been iconic of the neighborhood and circulates with almost every story.

In her book, Demanding Images: Democracy, Mediation and the Image Event, Karen Strassler (2020) envisions an ethnography of the public sphere and how images are central to it. The photographs circulating around Covid-19 in the sites and communities in which we as anthropologists work, and amongst the people with whom we are engaged are responses to the virus. Not only are they bringing into view pre-histories of everyday life as it were, but also ways of imagining social life and civic participation as they ought to be a world marred by the virus. To follow the path of circulation of news articles, tweets, and photographs on the Corona virus, the conversations emanating around them, the responses they produce, and their “uptake” (Larkin 2013) as well as the dialogues within them therefore become key objects for examining the relationships between everyday life, visibility, and the formation of publics.

Butler, Judith. 2011. “Bodies in Alliance and Politics of the Street.” Transversal texts. < https://transversal.at/transversal/1011/butler/en>

Habermas, Jurgen. 1991. The Structural Transformation of the Public Sphere: An Inquiry into a Category of Bourgeois Society. Cambridge: MIT Press.

Zehra Husain is a PhD candidate in anthropology at the Graduate Center at the City University of New York.