Honduras, New York | Sirens and Birds and Death: On -Not- Writing A Dissertation During a Pandemic

by Amelia Frank-Vitale
“It turns out, writing a dissertation is a lot like being in quarantine!” I joke, frequently, when people ask how I’m doing. But it’s not true. Not exactly. Although I’ve been working from home since I returned from Honduras in late August 2019, I haven’t been able to write a word of my dissertation since the pandemic started.

As I write this, I hear the sirens.

They were not constant, not at first, not in my part of Brooklyn. I am not that near a hospital. But I saw stories from other parts of the city, of the borough, about hearing sirens 24 hours a day. In my neighborhood, it started about a week ago.

And then I hear birds chirping.

Sirens and birds. The strange combination of unusual sounds that mark the auditory experience of the pandemic in New York.

A friend tells me: Amelia, you were in Honduras during the toque de queda (curfew), you’ve got this!

I tell her: That was different! Then, I went to the tomas.

During the post-election upheaval in Honduras 2017, when the government imposed a militarily enforced lockdown across the country, I was a few months into the fieldwork for my doctoral dissertation project. My response was to visit the makeshift road blockades put up by protestors, take photos of the military convoys rolling in to disperse them, talk to the young men about why they were protesting, pick up the tear gas canisters and bullet casings left behind from bouts of repression. I documented as much as I could during the day; then, at night, when we were all supposed to be off the streets, I listened to the banging of pots and pans and choruses of “es pa’ fuera que vas” – the anthem of the opposition – wafting through the streets of my neighborhood.

I come to anthropology from a trajectory of organizing and activism. My instinct in crisis is to gather, to come together. Among the many reasons the pandemic seems to have disrupted my ability to write – even as it has not really disrupted my schedule much at all – is this feeling of not knowing what to do, how to do anything meaningful, when gathering is the worst thing to do.

Another reason has to do with death.

Early on, well before New York City closed its restaurants, I started planning for quarantine. Sometimes I remember this as being because my family in Italy impressed upon me how seriously we needed to take the idea of staying home; sometimes I think it was because I noticed that Amazon was already nearly out of hand sanitizer. But there was also something about death and the possibility of dying in this preventable way that struck me, deeply.
Around that same time, which now seems like it was months ago, but was likely just mid-March, I had a long conversation with my friend and colleague Juan Martínez. Juan is a Salvadoran anthropologist who is one of the leading “experts” on gangs in Central America. We came to know each other while each doing fieldwork in San Pedro Sula: I was doing ethnography with deportees and their communities; he was doing ethnography with gangs and their communities. The overlap of these two worlds is substantial. 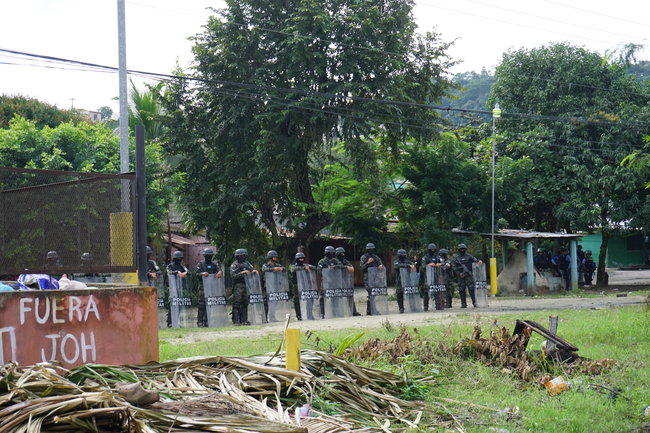 The police line waiting for the protesters, in January of 2018, when Hernandez was inaugurated for a second, illegal, term. The words “Fuera JOH” are written in graffiti, meaning out with JOH, the initials of Juan Orlando Hernandez.

I was surprised to hear that Juan was taking the threat of coronavirus as seriously as I was, as early as I was. Before Salvadoran President Nayib Bukele took the unprecedented step of shutting his country’s borders to all foreigners (including people from the USA!), Juan had bullied his mother into cutting a trip short to Spain and returning to El Salvador. He told me, with some sheepishness, that he had become a kind of doomsday prepper. I confessed to him that I had too.

I think each of us tried to get control over the circumstances as much as we could, as early as we could, in part because this disease gave us a warning. We had the time and the opportunity (and in our cases, the resources) to stock up on shelf-stable food and cleaning supplies, to limit our out-of-the-house activity (Juan is working on a book, me on my stalled dissertation), to, in effect, plan our way out of death. We took it seriously because we have been so close to so much death that couldn’t be managed, couldn’t be planned around, couldn’t be kept from creeping in. And if we could do it, didn’t we have a responsibility to do so? Not just for ourselves, but for our families and for all those people we’ve worked with who cannot?

Solo dios con uno. Friends in Honduras write this to me almost daily now. While I cringe at the sirens I hear outside, their wails are also, somehow, reassuring. New York has been hit hard, as everyone knows, but New York also has a strained, yes, but functioning system of hospitals and emergency medical care. In Honduras, people are worried about dying from hunger, before they can think about the virus. 65% of the country lives below the poverty line; many of these families work each day so they can eat the next day. They don’t have savings to fall back on or even the cash to buy two weeks’ worth of food at once. The government has promised provisions to poor families, but there are widespread reports that these bolsas solidarias are only being distributed to people loyal to the ruling party (which is roundly hated, especially among the poor). In one neighborhood in San Pedro Sula where I did a substantial amount of my fieldwork, the residents told me that the government people came with the bolsas but only gave them to people living in officially recognized houses. Most of this neighborhood is made up of invasiones, or informal settlements, unrecognized by the state, even if they’ve been there for decades. Most of the families here, then, regardless of political affiliation, walked away empty handed.

As the lockdown in Honduras has extended into its second month, people are getting increasingly desperate. There have been street protests, blockades not unlike those I documented in 2017, this time demanding food. Rather than being met with provisions or aid, they’ve been met with the military and tear gas. In typical Honduran style, there have been darkly humorous videos circulating of people make soup out of spent tear gas canisters – wouldn’t it be easier (and less expensive) for the government to just give them beans? In other countries – Brazil, Mexico, El Salvador – murders have plummeted as organized crime has stepped in to enforce curfews and distribute aid. In Honduras, gang members line up for donated food. And turf wars continue unabated. Last week I gasped when I saw the photograph of a young boy I knew as one of the victims in the latest “massacre.” He’d been deported back to Honduras in 2016.

My work is really centered on Central American migration, which has taken on a new kind of urgency and garnered more interest than ever before as the Trump administration has been, from the beginning, openly anti-immigrant. It was a strange thing to be doing the field work that I’d planned for years when the president of the United States decided, momentarily, that the people I worked with were those he hated most. At one point, I drove a father to the airport in San Pedro Sula to pick up the daughter he’d been separated from by US immigration agents seven months earlier. The guards told him that they were taking his child from him so that he never again considered returning to the United States. At first, their cruel policies worked: when he was deported back to Honduras, he didn’t want anything to do with the USA. At the moment, though, he’s considering trying again; things in his neighborhood have gotten more complicated as a rival gang is trying to make a play for the territory. I left Honduras intermittently to join the migrant “caravan” that made headlines – and Trump so angry – in 2018. And I saw first-hand how Trump used that as an excuse to justify a full-on assault on the asylum system.

And now Trump has decided that the pandemic is the excuse needed to justify what was, I think, their goal all along: shut down immigration altogether. To be clear, most of the people I worked with never tried for a visa, they wouldn’t have been eligible for any visas anyway, so the closing down of the United States’ immigration system has little repercussions for them. It lays bare, however, the way in which Hondurans in caravans or Muslim immigrants or poor asylum seekers or already-vetted refugees were only the first targets because they were the easy ones.

My dissertation is, in part, about how young people in Honduras live lives of continued displacement – in their home country and then across national borders – and what that means for people when they are unable to find stability, safety, arrival anywhere. It is also about how these young people are, essentially, unwanted by their country. Their labor is unnecessary, and their presence is potentially a threat to the stability of the regime. So, if they die at the hands of the police, or gangs, or narcos, or Mexican or US immigration enforcement, that really suits the Honduran government just fine. Now I can add coronavirus to the list.

As a Honduran economist put it during a zoom call, this pandemic is like a “ring on the finger” of Honduran President Juan Orlando Hernandez. A common saying in Honduras, it means something is a lucky, perfect fit. He’s using the crisis to militarize the country more. The undemocratic, brutal, corrupt things this regime had done previously, while trying to keep it mostly quiet, are now being done out in the open, with the excuse of doing it as a pandemic-necessary measure: more direct policing of the populace by the military, more limits on freedom of speech, more direct attacks on the press, more embezzling of funds destined for virus-response, and, perhaps most concerning of all, more clear plans for him to stay in power past the end of his second, already unconstitutional, four-year term.

This situation will only mean that more people will try to leave Honduras in the coming year(s). This is probably true for many other countries that will be ravaged by both the virus and their governments. As places like the United States move to further seal their borders – where on earth are people going to go? 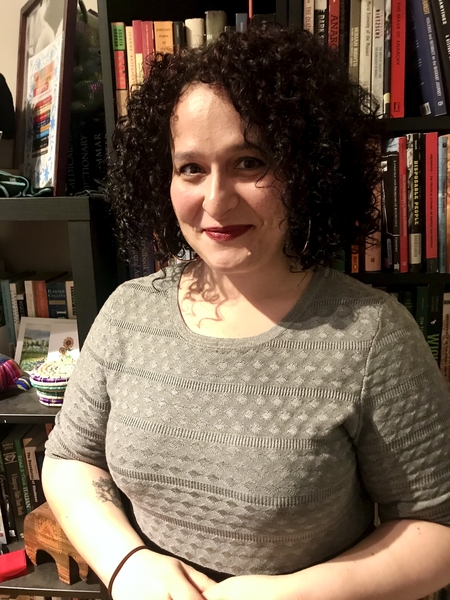 Amelia Frank-Vitale is a PhD candidate in anthropology at the University of Michigan. She currently resides in Brooklyn, NY

Amelia Frank-Vitale is a PhD candidate in anthropology at the University of Michigan. She currently resides in Brooklyn, NY.