We lean forward for the habitual double kiss, but sway back suddenly. Better not. My historian colleague and I had just emerged from drizzle-snarled Athens traffic at the University of Athens medical school campus. A few minutes later, four masters’ students from my seminar “Politics of Death and Mourning” would arrive for our tour of the Criminology Museum. This one-room collection, with its pre-war glass vitrines, is located inside the Toxicology-Forensics building, between the Anatomy Theater and the city morgue, at the nexus of death and knowledge.

What a day for this.

A student’s red umbrella pops at the edge of the frame. The next day the Minister of Health would announce the closing of schools and universities for fourteen days as a preemptive measure against the spread of the virus known as koronoïos (with omega or omicron), sometimes koronaïos. 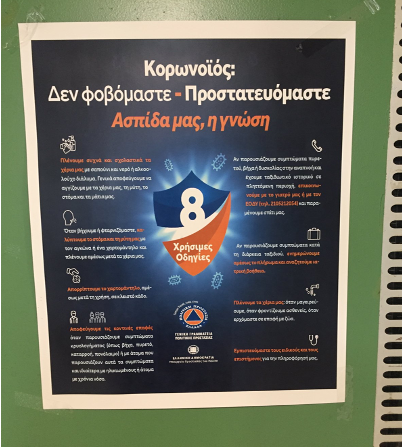 I do a double take when I discern the figure of a shield at the center of the new public health guidelines hastily taped to the elevator door at the university. “We are not afraid — we protect ourselves. Our shield (aspida mas), knowledge.” The potential aggression involved in protecting “us” suddenly popped out of the background.

“Our most valuable holding.” Imported from France in 1833 to secure the reign of Greece’s Bavarian King Otto, the only extant guillotine in Greece. Authentic and used. Fronted by a “bandit’s” head, an “abnormal” embryo, afloat in jars of formaldehyde. The epitome of enlightened, technologized state murder. Terror, the underbelly of Reason and Science, is the topos of modernity. Democracy always bears the colony within, political philosopher Achille Mbembe reminds us. But, in the colony, endless war is waged outside the law.

“It’s necessary to shut down current anarchic structures. But the existing ones can’t shut until new ‘closed’ ones are constructed. This will benefit the country, especially now with the flare up of public health issues. Like koronoïos, which can be dealt with effectively in a closed structure, not an anarchic, open one that’s a ‘health bomb’.” These “structures” warehouse people from Afghanistan, Syria, Iraq, Pakistan, Congo who managed to cross the Aegean from Turkey, only to stagnate in Europe’s purgatory. At 2am, before the government spokesman made his statement, armed riot police had arrived on several border islands via commissioned tourist ferries, meeting intense resistance from residents who want refugees gone, transported to the mainland. “Battlefield,” the headlines report.

The European Commission president expressed her gratitude to the Greek Prime Minister: “This border is not only a Greek border, it’s also a European border … I thank Greece for being our European aspida in these times.” Greek news media reported that she (flatteringly) used the Greek word. On February 27th, Turkey, reneging on its 2016 deal to contain refugees within its territory, had opened its border. On March 2nd, fire coming from the Greek side had “pushed back” (killed) 22-year-old Syrian refugee Mohammad Al-Arab.

The visit to the Anthropological Museum (one of the oldest in Europe, established 1886) was an afterthought. Well-lit, compact, fully-renovated, the museum could be anywhere. Eugenicist views scrubbed, original collections basemented. When asked about the history of the collection, the guide volleyed back “all the exhibits are casts” to resume her script about homo sapiens. In the last vitrine, though, the aboriginal skull from Tasmania, a German colleague’s inscription from 1905 inked into the bone, turns out to be original. So even here.

Koroni in ancient Greek means ‘twist’ or ‘bend’: crow’s (korax) beak, boat’s prow. Korona with an ‘a’, the monarch’s crown, later entered modern Greek from Italian as a calque. (The first case of coronavirus also entered Greece, not from refugees, but via Italy, on February 26th: a designer from Thessaloniki infected at Milan’s Fashion Week.) Coined in European languages from ancient Greek lexical parts, calques (Fr. calquer ‘to copy, to trace’) name the new — technologies, scientific terms, political concepts — before slipping into modern Greek. So they never quite fit. Translations really, not transcriptions. Linguists squabble over possible spellings: some delineating, others concealing the trajectory.

Penelope Papailias is an anthropologist at the University of Thessaly where she directs the Laboratory of Social Anthropology. She is the author of Genres of Recollection: History, Testimony, and Archive in Greece (Palgrave, 2001).