Give a present, write a poem.

Merry Christmas, everyone. Make me laugh, move me.

Christmas in Sweden—I watched it on TV. Fanny and Alexander. What a strange carol they sing—the actors—as they dance around the table, ring around the tree.

This box is a gift, beautifully wrapped, its label poetic. Read it now, it’s a hint. 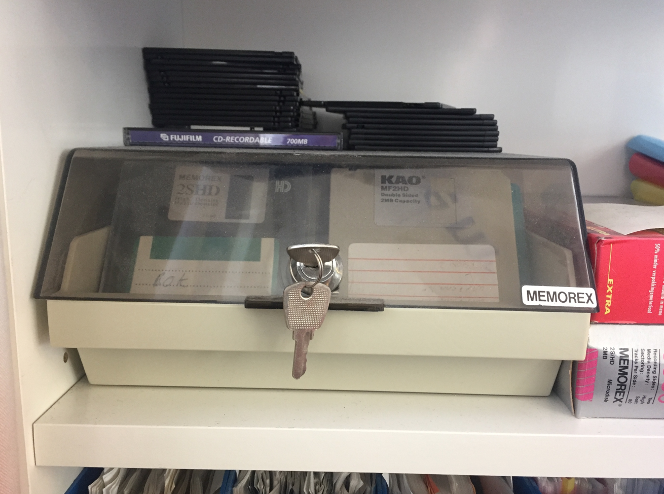 Beige and gray: the colors of the future, once upon a time. A plastic box made by Memorex, owned by IBM.

Do you remember floppy disks? Almost square, with a metal slider you could push to see the black tape hidden underneath, though you weren’t supposed to.

In Markus’ office, a box in the bookcase held data and dust.

Markus said he started with floppies. Later CDs. He had some of those too. Cohorts and variables, double click, open the spreadsheet. Numbers in boxes: income, age, postal codes. This is how you become an economist.

That was a long time ago. After the study concludes and the article’s out, you erase the disks, destroy the data. At least, those were the instructions from the statistical bureau, thinking, even then, about the people in the files: How to keep them safe.

What could be safer than a locked box?

Markus had the keys. But he knew how it would go: first the original would vanish, then the spare. Hopeless. Eventually, unintentionally, a solution—the key would be stored in the lock, the spare dangling from the thin metal ring they shared.

I never saw the third box, the poison box. Per told me about it in the library café. Every Thursday: pea soup and pancakes.

“Imagine,” said Per. “Under our feet: two five-story houses, each 300 meters long, buried deep underground.” I thought about it, substituting yards for meters. “That’s where we keep the core of our print collections,” he explained. Per was the deputy national librarian, so he would know.

Underneath the library, nineteenth-century newspapers were disappearing. “Printed on very bad paper,” said Per with a frown. “Impossible to preserve.” All you could do was scan the pages, time versus technology. Old news. The digital files were stored in Stockholm, the backups on servers far away. “In case something really bad happens.”

Letters become numbers. Libraries save what is written.

But things go wrong. Some published books, for example, are plagiarized. “The publisher withdraws the book, and it goes in the poison box.” Even worse, he explained, “we also have a very—specific—small collection of child pornography. Because pornography is part of the printed material that ends up here, whether we like it or not.”

He sipped his coffee, looked at me. “One regulation says no one is permitted to possess child pornography. And this other regulation says the National Library has to collect everything printed. We asked for advice, and they said you have to find a solution yourselves. So we put it in a safe, locked it up, and no one gets access to it.”

Why poison? Why boxes? Boxes promise to protect and save, close and open again—not tomorrow, later on. In between, something happens. The contents are the same, but the world changes. The box is a portal to a time of promises fulfilled.

Here’s my gift to you—it’s a fortune told as a riddle.

The ghost of Christmas future takes you away. A cold night, a distant hum. Darkness pierced by red lights blinking. Shelves of servers, systems and secrets, electrical pulses.

Dawn breaks. Clouds. Something terrible has happened, but you don’t know what. Fire or flood, the Baltic sea rising? Maybe violence, an attack. Stockholm is gone. The streets are empty, all the data was lost.

Thank god you backed up the files.

The curtains open on another scene. This is a better world of books and armchairs, peace and harmony, democracy and science. Scholars are waiting outside the library. Snow begins to fall.

The air is close in the stacks of the future. Was the poison box here all along, unopened? Or do you find it easily? The poison box is out in the open, it’s on display in the lobby. An pedantic exhibit of our evils, mostly ignored. Or are students studying records of wrongs in the reading room? See them writing in notebooks, all quiet loops and neat lines. What do they know of these things we failed to understand but promised to remember?

Write this down. It will always be like this: a mystery, a story, a lie.

Alison Cool is an anthropologist at the University of Colorado. She is writing a book about how people live and work with data in Sweden.