“Watch out for the tea!”

I am grabbing mugs as James fans documents across his kitchen table. But the papers are already watermarked by beverage stains, their corners dog-eared and well-thumbed. Setting them out, James knows each at a glance – by the shape and pattern of the text, the slant of a historical signature, the placement of a grainy diagram.

For two weeks now, I’ve been meeting with veterans in their 70s and 80s across the UK, asking them to recount serving at British nuclear bomb tests in the Pacific. Most start by introducing me to the archives. Their archives. 1

James first introduced himself to me at the Supreme Court in London, where a group of test veterans were waging a class action against the Ministry of Defence for radiation exposure. “They’ll never give up the real documents,” James said, seated in the Court Cafeteria, walking stick planted between his knees. “This was never going to be a fair fight.”

And how does one fight when the evidence that might prove culpability is controlled by the accused? Buried within the military’s own top secret archive. And yet documents have ways of being unruly. Of leaking out. Copies of some of the bomb planning records had been found in the Public Records Office, and in the uncensured folders of an Australian archive, almost by accident.

James hands me the first document. A meeting in London, November 19, 1956.2 Commander of Operation Grapple, Air Vice Marshall Oulton, needed to designate a radiation “Danger Zone” in the Western Pacific. He tabled a map, consisting of two circles drawn out at a radius of 400 nautical miles from Christmas and Malden Islands, the chosen location for the nuclear tests. This “preferred danger zone” was calculated on the assumption that if a nuclear bomb accidently detonated at ground level, the fallout would at maximum spread that far. This was premised upon a 150 kiloton blast.

“Well, in reality three of the bombs in Operation Grapple were huge. Megaton huge.” James points to the margins of the paper where he had scrawled this fact. He is used to arguing with these documents.

James reads aloud from the meeting record, in a clipped, officious voice. “Such an area is patently too large and has been reduced.” Overlaid upon the circles is a much smaller, irregular shaped zone drawn with efficient, straight lines. It weaves back and forth, vertical then horizontal, excluding all of the nearby inhabited islands. The Washington, Fanning, Jarvis and Penrhyn Islands are now classified as lying in the ‘safe zone.’ James offers no commentary, but lets the document sit between us for a moment. 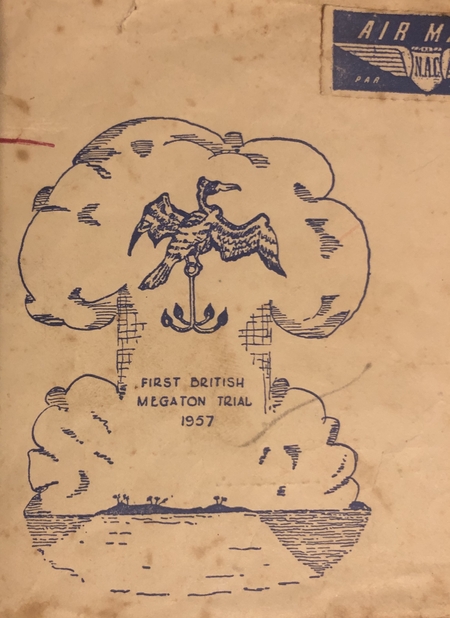 The next record. November 27, 1956. The scientific architects of the British bomb tests met in London to produce a top secret document entitled, “Safety Precautions Planned for Operation Grapple.”3 They noted that, according to this limited danger zone, safe levels of radiation “recommended by the International Commission on Radiological Protection (ICRP) would be necessarily exceeded.” Despite this they reasoned that, “only very slight health hazard to people would arise and that only to primitive peoples.”

Through all the photocopying of photocopies of archival documents, the word ‘primitive’ has faded, almost indecipherably, from the page. But James has underlined it, twice, in green ink, and traced back in the vanished letters p and v. His finger is, however, pressed below the word ‘only.’ He taps it.

He moves along, placing a letter down before me. September 20, 1957.4 The Colonial Office in London informed the Acting High Commissioner for the Western Pacific about plans for the next bomb test, Operation Grapple X. “There is no reason to fear damage to the island itself and the experts assure us the test will carry no risk for the people of inhabited islands in the vicinity or any in the colony.” The letter is brief. It purrs with confidence.

James recounts how, less than a month later, Britain detonated its first thermonuclear hydrogen bomb above Christmas Island. “That one was so much larger than they were expecting.” James says. He reaches over, and in the blank space of this letter he carefully writes out an equation for me.

We read another document. The only officially reported damage from the Grapple X blast were to several buildings, a helicopter and some large fuel tanks at the military camp on Christmas Island. All personnel were reported safe. Someone, on an earlier photocopy of this photocopy, has roughly underlined the word ‘safe.’ Or perhaps they have crossed it out.

I scanned the thick stack of unopened files sitting on the chair between us. “Is there anything in any of the documents you’ve seen, about the local people, on those neighbouring islands? The effects?”

James shook his head and gathered up the documents, placing them on an empty dining seat. He smoothed the floral tablecloth and opened up a new manila folder.

[1] In a 2009 British High Court case where a group of test veterans claimed damages against the Ministry of Defence, Judge Foskett notes “The bundles of documents in this case exceed 100 lever arch files, many containing up to 400 pages of documentation…I make no complaints about this…but it is important that anyone reading this judgment should understand the extent and depth of the documentary hinterland.”

Catherine Trundle teaches anthropology at Victoria University of Wellington. She is the author of Americans in Tuscany: Charity, Compassion, and Belonging (Berghahn Books, 2014).