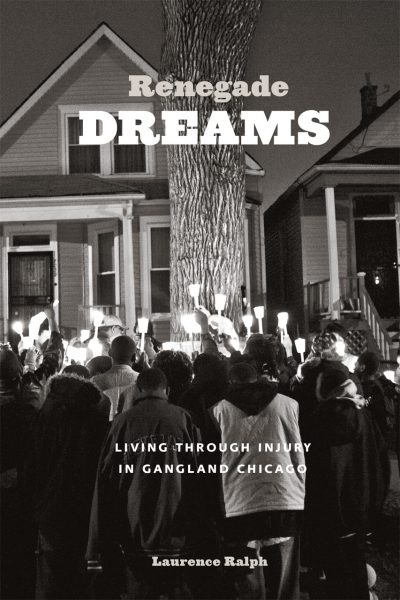 Living Through Injury in Gangland Chicago

Every morning Chicagoans wake up to the same stark headlines that read like some macabre score: “13 shot, 4 dead overnight across the city,” and nearly every morning the same elision occurs: what of the nine other victims? As with war, much of our focus on inner-city violence is on the death toll, but the reality is that far more victims live to see another day and must cope with their injuries—both physical and psychological—for the rest of their lives. Renegade Dreams is their story. Walking the streets of one of Chicago’s most violent neighborhoods—where the local gang has been active for more than fifty years—Laurence Ralph talks with people whose lives are irrecoverably damaged, seeking to understand how they cope and how they can be better helped.

Going deep into a West Side neighborhood most Chicagoans only know from news reports—a place where children have been shot just for crossing the wrong street—Ralph unearths the fragile humanity that fights to stay alive there, to thrive, against all odds. He talks to mothers, grandmothers, and pastors, to activists and gang leaders, to the maimed and the hopeful, to aspiring rappers, athletes, or those who simply want safe passage to school or a steady job. Gangland Chicago, he shows, is as complicated as ever. It’s not just a warzone but a community, a place where people’s dreams are projected against the backdrop of unemployment, dilapidated housing, incarceration, addiction, and disease, the many hallmarks of urban poverty that harden like so many scars in their lives. Recounting their stories, he wrestles with what it means to be an outsider in a place like this, whether or not his attempt to understand, to help, might not in fact inflict its own damage. Ultimately he shows that the many injuries these people carry—like dreams—are a crucial form of resilience, and that we should all think about the ghetto differently, not as an abandoned island of unmitigated violence and its helpless victims but as a neighborhood, full of homes, as a part of the larger society in which we all live, together, among one another.