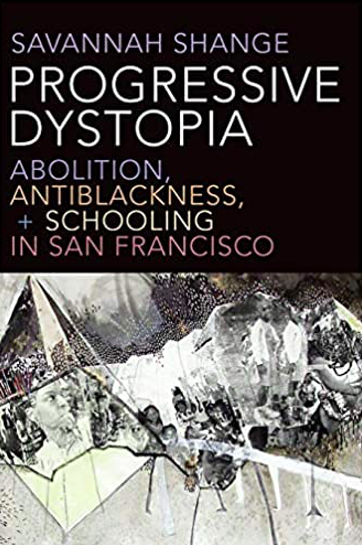 From the Publishers:
San Francisco is the endgame of gentrification, where racialized displacement means that the Black population of the city hovers at just over 3 percent. The Robeson Justice Academy opened to serve the few remaining low-income neighborhoods of the city, with the mission of offering liberatory, social justice–themed education to youth of color. While it features a progressive curriculum including Frantz Fanon and Audre Lorde, the majority Latinx school also has the district’s highest suspension rates for Black students. In Progressive Dystopia Savannah Shange explores the potential for reconciling the school’s marginalization of Black students with its sincere pursuit of multiracial uplift and solidarity. Drawing on ethnographic fieldwork and six years of experience teaching at the school, Shange outlines how the school fails its students and the community because it operates within a space predicated on antiblackness. Seeing San Francisco as a social laboratory for how Black communities survive the end of their worlds, Shange argues for abolition over revolution or progressive reform as the needed path toward Black freedom.

From the Prize Committee:
The Prize Committee were unanimous in their admiration for Shange’s Progressive Utopia, drawing attention to Shange’s distinctive voice in her ethnography and her highly original contributions to scholarship ranging from that of sensitive ethnography of education in the United States, to the urban spatial politics of the Bay Area, to the critique of liberalism of which progressivism is a branch and to Black Studies, specifically Afro-realism. Through this important work we see how educational infrastructures institutionalize anti-Blackness. The mobilization of the fantastic nowhere of Blackness deployed as a counter strategy to the spatial creep of progressivist utopias was nothing short of breathtaking. The parsing of abolition as a political commitment as distinct from revolution gives nuance to the politics of our present. Shange’s interdisciplinary approach, which has her reaching for concepts from popular culture as often as from the archives of anthropological theorizing, demonstrates how practitioners make anthropology anew.