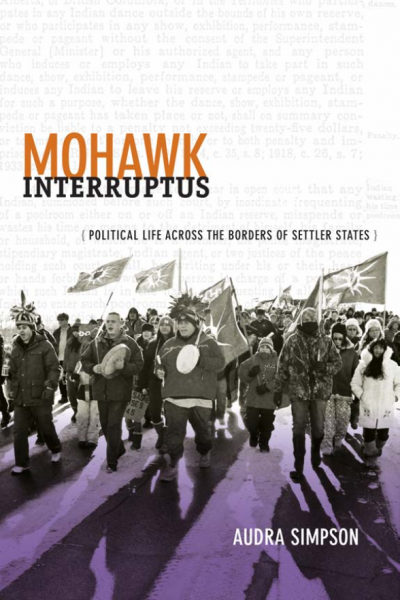 Political Life Across the Borders of Settler States

Mohawk Interruptus is a bold challenge to dominant thinking in the fields of Native studies and anthropology. Combining political theory with ethnographic research among the Mohawks of Kahnawà:ke, a reserve community in what is now southwestern Quebec, Audra Simpson examines their struggles to articulate and maintain political sovereignty through centuries of settler colonialism. The Kahnawà:ke Mohawks are part of the Haudenosaunee or Iroquois Confederacy. Like many Iroquois peoples, they insist on the integrity of Haudenosaunee governance and refuse American or Canadian citizenship. Audra Simpson thinks through this politics of refusal, which stands in stark contrast to the politics of cultural recognition. Tracing the implications of refusal, Simpson argues that one sovereign political order can exist nested within a sovereign state, albeit with enormous tension around issues of jurisdiction and legitimacy. Finally, Simpson critiques anthropologists and political scientists, whom, she argues, have too readily accepted the assumption that the colonial project is complete. Belying that notion, Mohawk Interruptus calls for and demonstrates more robust and evenhanded forms of inquiry into indigenous politics in the teeth of settler governance.