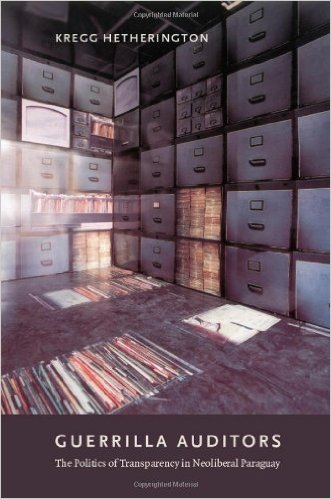 The Politics of Transparency in Neoliberal Paraguay

Guerrilla Auditors is an ethnographic account of the rise of information, transparency, and good governance in the post–Cold War era, and the effects of these concepts on Paraguay’s transition to democracy. Kregg Hetherington shows that the ideal of transparent information, meant to depoliticize bureaucratic procedures, has become a battleground for a new kind of politics centered on legal interpretation and the manipulation of official documents. In late-twentieth-century Paraguay, peasant land politics moved unexpectedly from the roads and fields into the documentary recesses of state bureaucracy. When peasants, bureaucrats, and development experts encountered one another in state archives, conflicts ensued about how bureaucracy ought to function, what documents are for, and who gets to narrate the past and the future of the nation. Hetherington argues that Paraguay’s neoliberal democracy is predicated, at least in part, on an exclusionary distinction between model citizens and peasants. Despite this, peasant activists have found ways to circumvent their exclusion and in so doing question the conceptual foundations of international development orthodoxy.