Austria | Far from Being (Far) Right? On Pandemic, Radical Youth, and Anthropologists

“Honestly – I believe it will be surprising for you to hear it from me – I am so scared that the EU and all this mythology of the European solidarity has crumbled so easily. I am not satisfied [that it proved us right], because the victim is the common man, and not those who have been building this system for the past decades.”

These words come from an email sent to me in March by a leader of a far-right youth movement I have been studying within a project on transnational far-right networking. In the last years, I have spent a good deal of time listening to my research participants’ reproaches of the EU [European Union]. Far from rejecting the idea of some sort of European unity, they are convinced that it is the European Union itself which erodes the European ideal by dissolving the “essence” of European culture through multiculturalism and migration and by limiting the autonomy of individual states. Theirs is a vision of “a Europe of strong and sovereign nation-states” with clearly defined boundaries and limited movements of goods and people.

The current pandemic affords them an opportunity to act out their conviction that we are each obliged to support our “own people” first. My case-studies are Poland and Italy, two countries impacted by the crisis in a very different manner yet equally unprepared for it. I have had a chance to observe quite similar responses among my research participants from each country. In both, activists organize material help for medical staff and food deliveries for homeless and poor inhabitants. Pictures documenting these initiatives are eagerly shared via social media (a good PR strategy), but so are the articles discussing the idea of “universal income.” They attack their governments for failing to build ambitious support systems and call for more state intervention. Never before have I seen them re-posting so much from various left-wing opinion outlets, along with inflamed comments: “That is why I had never declared myself a right-winger! What we need is a socialist response.”

Certainly, this socialist response is of a particular kind; it is about measures targeting their co-nationals, welfare chauvinism if you wish. It is an idea they have been long embracing long, criticizing the EU for prioritizing foreign interests (whether embodied by immigrants or foreign capital). And it is an idea which is far from surprising if we take into account a long history of “national” cum “socialist” components among various radical-right wing actors. What makes the current situation particularly consequential is the fact the reaction within the EU – the immediate closure of the borders (internal and external), but delayed attempt at helping the most effected zones (which, ideally, need not only be defined as “states”) – is a deeply nationalist response. Ironically, this response embodies the views many would gladly define as “far-right” ones. Meanwhile, the idea of prioritizing “our people” has proved, not for the first time, to be a rather mainstream one.

Does this satisfy the far right? Some friends of the author of the opening lines are pleased perhaps, others are too busy getting by. It is not my wish to claim all the far-right actors are now preoccupied about the lot of “common man,” just as I am far from discounting a statement of this sort simply because it comes from a “morally suspicious” group. Rather, I find it important to recognize the unique opportunities that the current critical moment offers us anthropologists, both in terms of thinking about the present-day and thinking about our discipline. 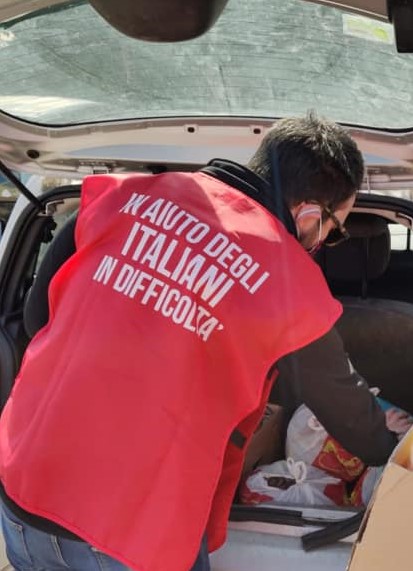 “In help for Italians in difficulties” Photo provided by research participants

We are well accustomed to laments about anthropologists not being vocal enough in debates on immediate socio-political problems (such as the rise of far right). Observations of the pandemic, and all its effects, give us a remarkable opportunity to be more present because this unprecedented emergency is likely to affect all those dimensions of human lives we ordinarily explore. No matter if it is about the intimate sphere of family relations, ways of making do by precarity-stricken workers, religious leaders’ ways of maintaining community amidst distance, or expert discussions on international tax system, anthropologists are “already” there. Therefore we can pursue what Marilyn Strathern, and more recently Douglas Holmes, describe in terms of a “surplus of ethnographic material” which leads to “(…) anticipation by default, to be found in tools already there or in open-ended modes of study, such as ‘ethnography’, which allow us to recover antecedent of future crises from the material not collected for the purpose.” (Strathern 2006: 6-7; cf. Holmes 2019: 65). It is by recovering the data and knowledge we already possess that we can find the ways to capture the present and even anticipate further developments.

In relation to the far right and the pandemic, political commentators were quick to ask if the unavoidable economic crisis will push even more people to embrace populist promises? Will we face again a replay of the 1930s? Will the far right be successful in spreading xenophobia? These are “large issues” which we can address thanks to the already possessed knowledge of “small places,” and the concerns of a “common man.” I don’t think we can give decisive answers, but we can certainly help to unpack the very idea of “promise,” and shed light on experiences of economic upheavals and on what triggers hostility to “Others.” By and large, this means elucidating how political imaginaries and everyday experiences converge and bring about the new (and sometimes the old).

A contribution to a broader knowledge must also mean a contribution to the anthropological reflection per se. Few of us can actually conduct fieldwork now, as the very opportunity of going somewhere is strongly limited. Digital ethnography is an option for some, yet done amateurishly runs risk of superficiality; we might be better off following Strathern’s call for reflecting on how our to-date research anticipated future needs (ibid.). Moreover, what the current moment affords us is a space for a reflection on today’s relationship with our research participants. Precisely because of our disciplinary tendency to focus on “the marginalized” and “the excluded,” we are likely to disagree when hearing that the pandemic reveals the “fragility of humanity.” We feel that, on the contrary, what the pandemic actually reveals are unequal experiences of the pandemic and diametrically different chances to withdraw, to keep employment, to protect oneself and loved ones.

But this emergency does allow us to experience commonality: for instance when expressions of care and concern about others’ well-being come to, temporarily at least, dominate the researcher-research participants’ relation.

This has been the case of my own fieldwork with the far right, the fieldwork which I initially considered “suspended,” and which I by now think of rather as “extended,” in a twofold way. On the one hand, in trying to comprehend their heightened “socialist” orientation during the pandemic, I am able to draw on my own “surplus of ethnographic material” and to interpret what they do as a logical continuation of their path. On the other hand, the online communication that is more personal than ever, and which moves beyond the roles of the researcher and the researched, has allowed me to temporarily bracket the adjective “far-right” when considering my research participants’ “activism.” Such a bracketing is not meant to ignore that their activism targeting “co-nationals in need” is by definition exclusionary or to gloss over its strategic aspects, but to consider what I learn from reflecting with them on the question “What comes after?” And: how does this knowledge matter? As one of my interlocutors said: “The worse thing is, in my view, that this [drama] will sooner or later come to an end, and we will go back to ‘normality,’ without having learnt anything.”
‪‬‬

Agnieszka Pasieka is an Elise Richter Research Fellow at the Department of Social and Cultural Anthropology, University of Vienna.