@Ferguson: Still Here in the Afterlives of Black Death, Defiance, and Joy

Introduction:
Still here in the afterlives
by SHANTI PARIKH and JONG BUM KWON

Faces of the Movement
by DE NICHOLS

We better pull this wire now
by CHEERAZ GORMON

Crime seen:
Racial terror and the technologies of Black life and death
by SHANTI PARIKH and JONG BUM KWON

Five years later, but centuries in the making:
Ferguson, racial segregation, and fatal interactions with police
by ODIS JOHNSON JR.

My Lens, Our Ferguson
by ADRIAN OCTAVIUS WALKER

Part 2: The Politics of Living and Resisting

Trauma at home:
A queer Black feminist’s experience in the afterlife of state‐sanctioned violence in Ferguson
by CHELSEY R. CARTER

It Takes Two Generations to Forget
by SARAH PAULSEN

Reflections from youth in East St. Louis:
Past, present, and future
by TREASURE SHIELDS REDMOND

This forum is dedicated to the memory of people killed by police and other state violence. To their parents, siblings, partners, and other kinfolx, and the bold young leaders and participants of the Ferguson uprising, BLM, and decolonizing movements around the world who courageously challenge state-sanctioned, anti-Black violence and remain committed to theracial justice—we thank you. In preparing this forum, we give special thanks to AE coeditor Stacy Leigh Pigg for providing the initial motivation for this forum and extending creative license to venture outside anthropology’s canonical traditions. Weare inspired by our artivist and academic collaborators, whose work, ideas, critiques, and creativity helped shape this socio-political collage. AE’s outstanding copyeditor, Pablo Morales, deserves endless gratitude for his ﬁne instincts, attention to detail, and patience. Johnelle Lamarque and Kathleen Inglis provided invaluable logistical support in coordinating the manymoving parts of this endeavor. We are grateful to the anonymous peer reviewers for their speedy and incisive comments, and to Washington University in St. Louis for providing ﬁnancial support for the conference from which this emerged. 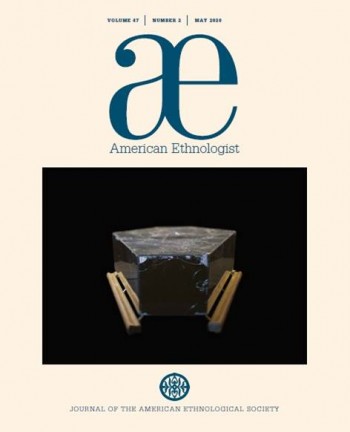