Driving in terrain
Automobility, modernity, and the politics of statelessness in Russia
by ANNA KRUGLOVA

Smugglers, migrants, and demons
Cosmographies of mobility in the northern Caribbean
by JEFFREY S. KAHN

Regulating the family through religion
Secularism, Islam, and the politics of the family in contemporary Turkey
by HIKMET KOCAMANER

After Ethnos
by Tobias Rees • reviewed by JOHN R. EIDSON

Lives in Transit
Violence and Intimacy on the Migrant Journey
by Wendy A. Vogt • reviewed by JASON JAMES

Islands of Sovereignty
Haitian Migration and the Borders of Empire
by Jeffrey S. Kahn • reviewed by LIDIA MARTE

Animal Ethos
The Morality of Human‐Animal Encounters in Experimental Lab Science
by Lesley A. Harp • reviewed by RENNY THOMAS 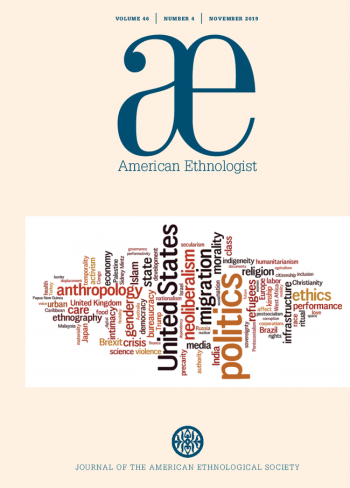