To sing with another’s voice
Animation, circumspection, and the negotiation of Indigeneity in northern Australian new media
by DANIEL FISHER

Stock morality
Whalers, activists, and the power of the state in the Makah whaling conflict
by LES BELDO

Paid
Tales of Dongles, Checks, and Other Money Stuff
by Bill Maurer, Lana Swartz, and eds • reviewed by DAIVI RODIMA‐TAYLOR

Money in a Human Economy
by Keith Hart and ed. • reviewed by PATRICK NEVELING

Inheritance of Loss
China, Japan, and the Political Economy of Redemption after Empire
by Yukiko Koga • reviewed by ELLEN R. JUDD

Life in Oil
Cofán Survival in the Petroleum Fields of Amazonia
by Michael L. Cepek • reviewed by SHANE GREENE

The Imbalance of Power
Leadership, Masculinity and Wealth in the Amazon
by Marc Brightman • reviewed by CHRIS VON RUEDEN 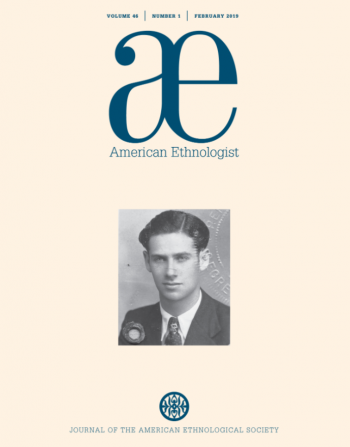