A world without innocence
by MIRIAM TICKTIN

Fixity
On the inheritance and maintenance of tea plantation houses in Darjeeling, India
by SARAH BESKY

Before the ruins
Love, death, and the unmaking of place in neoliberalizing Algeria
by JANE E. GOODMAN

Never too late for pleasure
Aging, neoliberalism, and the politics of potentiality in Denmark
by HENRIK HVENEGAARD MIKKELSEN

The power of submission
Self and community in Fijian Pentecostal discourse
by KAREN J. BRISON

Life as a Hunt
Thresholds of Identities and Illusions on an African Landscape
by Stuart A. Marks • reviewed by ALLISON HARNISH

Staying with the Trouble
Making Kin in the Chthulucene
by Donna J. Haraway • reviewed by CATERINA SCARAMELLI

Anthropology and Economy
by Stephen Gudeman • reviewed by THOMAS DUNK

Colonial Jerusalem
The Spatial Construction of Identity and Difference in a City of Myth, 1948–2012
by Thomas Philip Abowd • reviewed by REBECCA L. TORSTRICK

AIDS and Masculinity in the African City
Privilege, Inequality, and Modern Manhood
by Robert Wyrod • reviewed by KARI B. HENQUINET

Real Queer?
Sexual Orientation and Gender Identity Refugees in the Canadian Refugee Apparatus
by David A. B. Murray • reviewed by MARYCAROL HOPKINS

Making a Good Life
An Ethnography of Nature, Ethics, and Reproduction
by Katharine Dow • reviewed by SALLIE HAN

Schooled on Fat
What Teens Tell Us about Gender, Body Image, and Obesity
by Nicole Taylor • reviewed by BEVERLY ANN DAVENPORT

Our Most Troubling Madness
Case Studies in Schizophrenia across Cultures
by T. M. Luhrmann and Jocelyn Marrow eds. • reviewed by EMILY MENDENHALL

The Law of Possession
Ritual, Healing, and the Secular State
by William S. Sax and Helene Basu eds. • reviewed by ERIK MUEGGLER

Inside African Anthropology
Monica Wilson and Her Interpreters
by Andrew Bank and Leslie J. Bank eds. • reviewed by SURAJ YENGDE 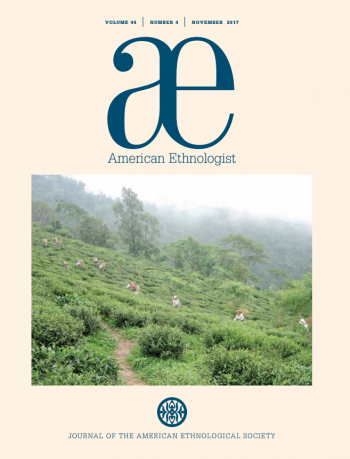