Self-governance, psychotherapy, and the subject of managed care
Internal Family Systems therapy and the multiple self in a US eating-disorders treatment center
by Rebecca J. Lester

Psicoeducación in the land of magical thoughts
Culture and mental-health practice in a changing Oaxaca
by Whitney L. Duncan

The right to know
Suffering, human rights, and perplexities of politics in Lebanon
by Shea McManus

Refugees of the Revolution
Experiences of Palestinian Exile
by Diana Allan • reviewed by Kristin V. Monroe

Two Arabs, a Berber, and a Jew
Entangled Lives in Morocco
by Lawrence Rosen • reviewed by Oren Kosansky

At Home with the Diplomats
Inside a European Foreign Ministry
by Iver B. Neumann • reviewed by Cecelia Lynch

The Need to Help
The Domestic Arts of International Humanitarianism
by Liisa H. Malkki • reviewed by Erica Caple James

Social Science Goes to War
The Human Terrain System in Iraq and Afghanistan
by Montgomery McFate and Janice H. Laurence and eds. • reviewed by Amy Swiffen

Yearnings in the Meantime
“Normal Lives” and the State in a Sarajevo Apartment Complex
by Stef Jansen • reviewed by Andrew C. Gilbert

Anthropology at the Crossroads
The View from France
by Sophie Chevalier and ed. • reviewed by Abdellah Hammoudi

Pious Practice and Secular Constraints
Women in the Islamic Revival in Europe
by Jeanette S. Jouili • reviewed by Alisa Perkins

Gypsy Economy
Romani Livelihoods and Notions of Worth in the 21st Century
by Micol Brazzabeni, Manuela Ivone Cunha, and Martin Fotta, and eds. • reviewed by Carol Silverman

Made in Madagascar
Sapphires, Ecotourism, and the Global Bazaar
by Andrew Walsh • reviewed by James H. Smith

Metamorphosis
Studies in Social and Political Change in Myanmar
by Renaud Egreteau and François Robinne eds. • reviewed by Yoko Hayami

At the Heart of the State
The Moral World of Institutions
by Dider Fassin ed. and Patrick Brown and Didier Fassin trans. • reviewed by Stephen Metraux 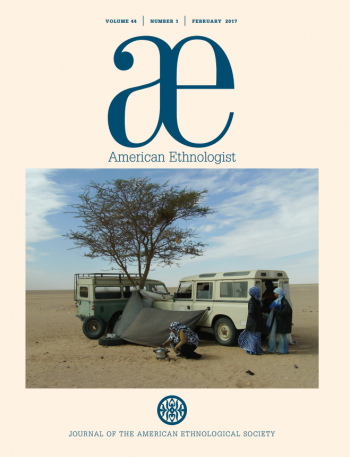