Documents of indiscipline and indifference
The violence of bureaucracy in a Brazilian juvenile prison
by K. Drybread

The postneoliberal fabulation of power
On statecraft, precarious infrastructures, and public mobilization in Brazil
by João Biehl

Crimecraft
Journalists, police, and news publics in an Argentine town
by Ieva Jusionyte

Settler agnosia in the field
Indigenous action, functional ignorance, and the origins of ethnographic entrapment
by Grant Arndt

Atmosphere
Context, detachment, and the view from above Earth
by David Valentine

Forms of exclusion
Undocumented students navigating financial aid and inclusion in the United States
by Andrea A. Flores

Ethnography at its edges
Compulsory Zionism, free speech, and anthropology
by Lesley Gill

Politics in Color and Concrete
Socialist Materialities and the Middle Class in Hungary
by Krisztina Fehérváry • reviewed by Keith M. Murphy

Revolt of the Saints
Memory and Redemption in the Twilight of Brazilian Racial Democracy
by John F. Collins • reviewed by John Burdick

“Getting By”
Class and State Formation among Chinese in Malaysia
by Donald M. Nonini • reviewed by Eric C. Thompson

The Making of an African Working Class
Politics, Law, and Cultural Protest in the Manual Workers’ Union of Botswana
by Pnina Werbner • reviewed by Lincoln Addison 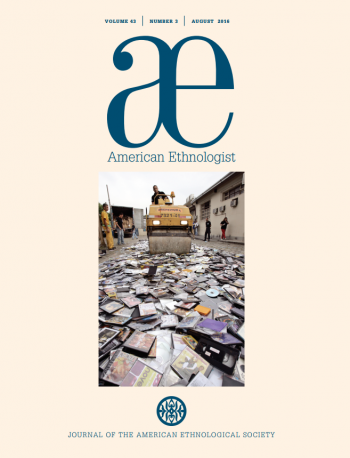