The 2015 Refugee Crisis in Europe: Forum

Representing the “European refugee crisis” in Germany and beyond
Deservingness and difference, life and death
by Seth M. Holmes and Heide Castañeda

Immobilizing mobility
Border ethnography, illiberal democracy, and the politics of the “refugee crisis” in Hungary
by Annastiina Kallius, Daniel Monterescu, and and Prem Kumar Rajaram

Love in the time of occupation
Reveries, longing, and intoxication in Kashmir
by Saiba Varma

The righteous and the rightful
The technomoral politics of NGOs, social movements, and the state in India
by Erica Bornstein and Aradhana Sharma

Rituals of care for the elderly in northern Thailand
Merit, morality, and the everyday of long-term care
by Felicity Aulino

Palestine, my love
The ethico-politics of love and mourning in Jewish Israeli solidarity activism
by Fiona Wright

Petitioning a giant
Debt, reciprocity, and mortgage modification in the Sacramento Valley
by Noelle Stout

Islam, Youth, and Modernity in the Gambia
The Tablighi Jama’at
by Marloes Janson • reviewed by Michelle C. Johnson

The Voice in the Drum
Music, Language, and Emotion in Islamicate South Asia
by Richard K. Wolf • reviewed by Mary Hancock

The Calls of Islam
Sufis, Islamists, and Mass Mediation in Urban Morocco
by Emilio Spadola • reviewed by Bernhard Leistle

Ethnography for the Internet
Embedded, Embodied and Everyday
by Christine Hine • reviewed by Jennifer Cool

The Republic Unsettled
Muslim French and the Contradictions of Secularism
by Mayanthi L. Fernando • reviewed by John R. Bowen

The Spirit of the Laws in Mozambique
by Juan Obarrio • reviewed by Olufunmilayo B. Arewa

Tamil Brahmans
The Making of a Middle-Class Caste
by C. J. Fuller and Haripriya Narasimhan • reviewed by Timothy P. Daniels

Histories of Victimhood
by Steffen Jensen and Henrik Ronsbo and eds. • reviewed by Ellen Marakowitz

Mysteries of the Jaguar Shamans of the Northwest Amazon
by Robin M. Wright • reviewed by Evgenia Fotiou

The Khmer Lands of Vietnam
Environment, Cosmology and Sovereignty
by Philip Taylor • reviewed by Philip Hirsch

Environment and Citizenship in Latin America
Natures, Subjects and Struggles
by Alex Latta and Hannah Wittman and eds. • reviewed by Jonathan DeVore 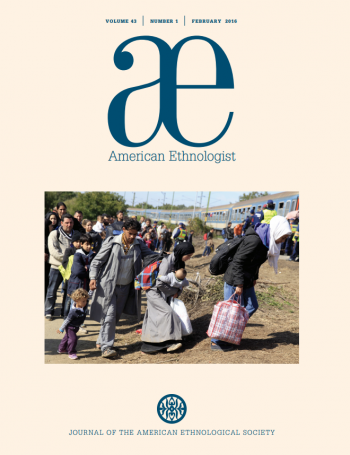