State, corruption, postcoloniality
A conversation with Akhil Gupta on the 20th anniversary of “Blurred Boundaries”
by Akhil Gupta, David Nugent, and Shreyas Sreenath

The public afterlife of ethnography
by Didier Fassin

Transmedia as experimental ethnography
The Exit Zero Project, deindustrialization, and the politics of nostalgia
by Christine J. Walley

Speaking of news
Press, democracy, and metapragmatics in a changing India
by Mark Allen Peterson

Democracy as the negation of discourse
Liberalism, clientelism, and agency in Brazil
by Aaron Ansell

How (not) to talk about adoption
On communicative vigilance in Spain
by Susan E. Frekko, Jessaca B. Leinaweaver, and Diana Marre

Freeze, die, come to life
The many paths to immortality in post-Soviet Russia
by Anya Bernstein

The Good Life
Aspiration, Dignity, and the Anthropology of Wellbeing
by Edward F. Fischer • reviewed by Asta Vonderau

Being German, Becoming Muslim
Race, Religion, and Conversion in the New Europe
by Esra Özyürek • reviewed by Alisa Perkins

Things
Religion and the Question of Materiality
by Dick Houtman, Birgit Meyer, and eds • reviewed by Thomas J. Csordas 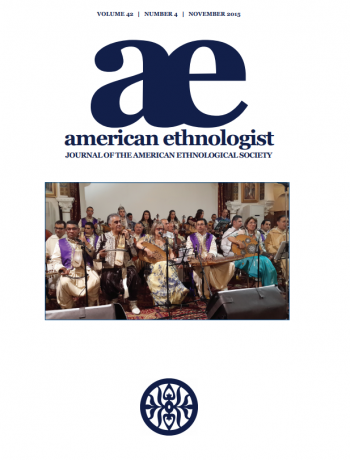