#Ferguson
Digital protest, hashtag ethnography, and the racial politics of social media in the United States
by Yarimar Bonilla and Jonathan Rosa

Anthropology and the inchoate intimacies of power
by Michael Herzfeld

The paradox of protection
Human rights, the masculinist state, and the moral economy of gratitude in Turkey
by lif M. Babül

A tale of two courts
Judicial transformation and the rise of a corporate Islamic governmentality in Malaysia
by MIchael G. Peletz

Questioning Secularism
Islam, Sovereignty, and the Rule of Law in Modern Egypt
by Hussein Ali Agrama • reviewed by Abdelmajid Hannoum

On the Doorstep of Europe
Asylum and Citizenship in Greece
by Heath Cabot • reviewed by Kathryn O. Kozaitis

Outlawed
Between Security and Rights in a Bolivian City
by Daniel M. Goldstein • reviewed by Ellen Moodie

African Art and Agency in the Workshop
by Sidney Littlefield Kasfir, Till Förster, and eds • reviewed by Joanna Grabski

Conceiving Cuba
Reproduction, Women, and the State in the Post-Soviet Era
by Elise Andaya • reviewed by Rosalynn Adeline Vega

An Anthropology of Architecture
by Victor Buchli • reviewed by Charles R. Riggs

Borders of Belonging
Experiencing History, War and Nation at a Danish Heritage Site
by Mads Daugbjerg • reviewed by Thomas Thiemeyer

When I Wear My Alligator Boots
Narco-Culture in the U.S.–Mexico Borderlands
by Shaylih Muehlmann • reviewed by Deborah A. Boehm

Biological Relatives
IVF, Stem Cells, and the Future of Kinship
by Sarah Franklin • reviewed by Christa Craven and Thomas Tierney

Return to the Land of the Head Hunters
Edward S. Curtis, the Kwakwaka’wakw, and the Making of Modern Cinema
by Brad Evans, Aaron Glass, and eds • reviewed by Richard Handler 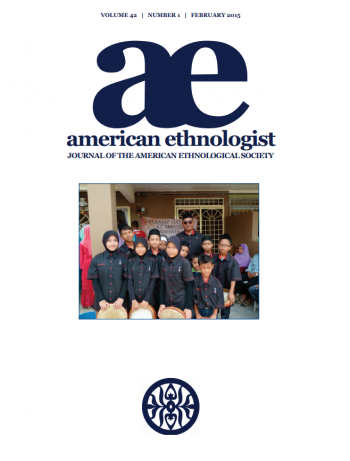