AES/APLA 2013: Anthropologies of Conflict in a New Millenium 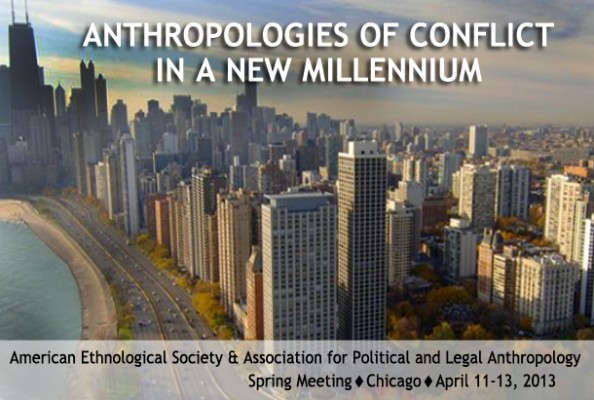 Theme: Anthropologies of Conflict in a New Millenium

From the events of September 11 to the war in Iraq, from the Arab spring to Greek riots, from the invasion of Afghanistan to the occupation of Wall Street, the opening of the new millennium has witnessed a burst of new forms of conflict around the world. For anthropologists, these events have raised profound questions both about the nature of human conflict and about the place of our discipline within it. How should anthropologists understand the new forms of conflict that increasingly dominate the world stage? In what ways do we need to rethink our accustomed notions of power, of nation, of technology, and of the relationship between individual and group? And how do we situate ourselves, scientifically and morally, amid the contending groups whose cultures we study?

In April of 2013, the American Ethnological Society and the Association for Political and Legal Anthropology will explore these questions at our joint Spring Meeting in Chicago, Illinois. We invited proposals for papers, panels, workshops, and special events that interrogate the place of conflict in anthropological thought and practice. Subjects include:

Anthropologists in conflict zones
Meanings of power in the contemporary world
The ethics of anthropological engagement with military authorities
Law and violence
The meanings of protest on the international stage
Practices of conflict resolution, repair, and reconciliation
The changing role of the nation-state
Religion and power in contemporary conflicts
The role of the legal process in times of conflict
Conflict and the surveillance state
Changing understandings of religious fundamentalism
Anthropological ethics in a time of violence
The role and influence of diaspora populations in conflict
Ethnography of specific conflict arenas – e.g., the Occupy movement, Iraq, Afghanistan, Darfur, the Arab Spring, the European austerity revolts, the War on Terror, the Tea Party movement

Workshops! AESs graduate student representative, Jessica Hardin has assembled the following graduate-student workshops for the spring meetings. We are pleased to announce that AES will provide a subsidy of $160 (the cost of one night conference hotel) for graduate students who participate in any of the following four workshops (A-D). Workshop registration was deadline February 15 and was on a first come/first served basis, via an email to Jessica with required information, which is available (along with detailed workshop descriptions) at this link: Spring Workshops 2013. (We will also be hosting a grad student mixer at the meetings, details to come!)

A) Methodological and Ethical Issues in Ethnographic Research on Conflict and Violence, led by Carolyn Nordstrom (U of Notre Dame) and Sally Engle Merry (NYU) (subsidy available)

Recent PhDs are welcome to participate in the Becoming a Practicing Anthropologist workshop (no subsides for you, sorry!)

We also are offering a workshop at the spring meetings called Grant Proposal Writing for Recent PhDs, facilitated by Susan Greenhalgh (Harvard U) and Jeffrey Mantz (NSF) (no subsidy for this one!).

Reading salons! (Details and book descriptions here at Reading Salons) AES/APLA is happy to host four reading salons, an opportunity to discuss murder mysteries and science fiction novels with other anthropologists. Each leader has chosen a book that complements their fieldwork-based expertise. Please sign up for a reading salon and read the book in advance. Limit of 10 people to each salon.

The books discussed are: