No Aging in India 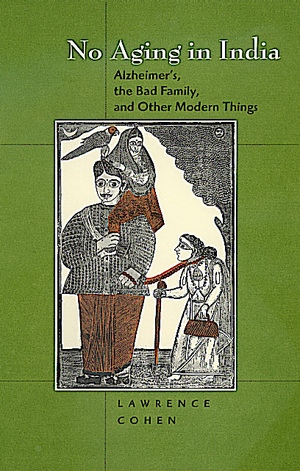 No Aging in India

Alzheimer’s, The Bad Family and other Modern Things

From the opening sequence, in which mid-nineteenth-century Indian fishermen hear the possibility of redemption in an old woman’s madness, No Aging in India captures the reader with its interplay of story and analysis. Drawing on more than a decade of ethnographic work, Lawrence Cohen links a detailed investigation of mind and body in old age in four neighborhoods of the Indian city of Varanasi (Banaras) with events and processes around India and around the world. This compelling exploration of senility—encompassing not only the aging body but also larger cultural anxieties—combines insights from medical anthropology, psychoanalysis, and postcolonial studies. Bridging literary genres as well as geographic spaces, Cohen responds to what he sees as the impoverishment of both North American and Indian gerontologies—the one mired in ambivalence toward demented old bodies, the other insistent on a dubious morality tale of modern families breaking up and abandoning their elderly. He shifts our attention irresistibly toward how old age comes to matter in the constitution of societies and their narratives of identity and history.