Emergent Forms of Life and the Anthropological Voice 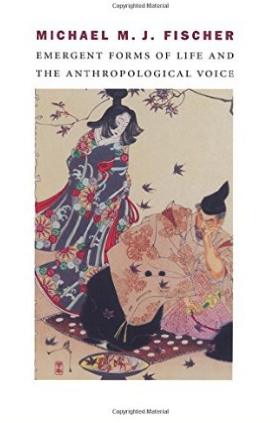 Emergent Forms of Life and the Anthropological Voice

From the Publisher: Anthropology as Cultural Critique helped redefine cultural anthropology in the 1980s. Now, with Emergent Forms of Life and the Anthropological Voice, pathbreaking scholar Michael M. J. Fischer moves the discussion to a consideration of the groundwork laid in the 1990s for engagements with the fast-changing worlds of technoscience, telemedia saturation, and the reconstruction of societies after massive trauma. Fischer argues that new methodologies and conceptual tools are necessitated by the fact that cultures of every kind are becoming more complex and differentiated at the same time that globalization and modernization are bringing them into exponentially increased interaction. Anthropology, Fischer explains, now operates in a series of third spaces well beyond the nineteenth- and twentieth-century dualisms of us/them, primitive/civilized, East/West, or North/South. He contends that more useful paradigms—such as informatics, multidimensional scaling, autoimmunity, and visual literacy beyond the frame—derive from the contemporary sciences and media technologies.

“Michael M. J. Fischer’s ‘anthropology outside the frame’ takes on an astounding range of contemporary subjects: Austrian politics, Polish and Iranian films, cyberspace, virtual surgery, xenotransplantation, the autobiographical construction of memory, the technoscientific representation of the social world, and the ethical complexities of fieldwork among tribal peoples. His extension of ethnography beyond its traditional concerns to the investigation of the emerging forms of human consciousness usually vaguely grouped as ‘late-’ or ‘postmodern’ sets out a broad new agenda for cultural description and political critique. An unstandard, adventurous, eye-opening work.”—Clifford Geertz

A vigorous advocate of the anthropological voice and method, Fischer emphasizes the ethical dimension of cultural anthropology. Ethnography, he suggests, is uniquely situated to gather and convey observations fundamental to the creation of new social institutions for an evolving civil society. In Emergent Forms of Life and the Anthropological Voice Fischer considers a dazzling array of subjects—among them Iranian and Polish cinema, cyberspace, autobiographical and fictional narrative, and genomic biotechnologies—and, in the process, demonstrates a cultural anthropology for a highly networked world. He lays the groundwork for a renewed and powerful twenty-first-century anthropology characterized by a continued insistence on empirical fieldwork, engagements with other disciplines, and dialogue with interlocutors around the globe.

“True to its title, Emergent Forms of Life and the Anthropological Voice is about worlds coming into being in technoculture. Attentive especially to the new biologies and biotechnologies, information technologies, and ecological and environmental matters, Michael M. J. Fischer explores what he calls ‘ethical plateaus’ or domains of ethical challenge. This wonderful book neither condemns nor glorifies emergent worlds; instead it gives us deep and intelligent analysis and reflection from a distinctive ethnographic point of view. ‘Culture’ comes alive here. As Fischer reminds us vividly, culture is not a variable. Culture is about relationships, about relating as a verb. Culture is a passage and a topos, and Fischer is a masterful guide.”—Donna Haraway