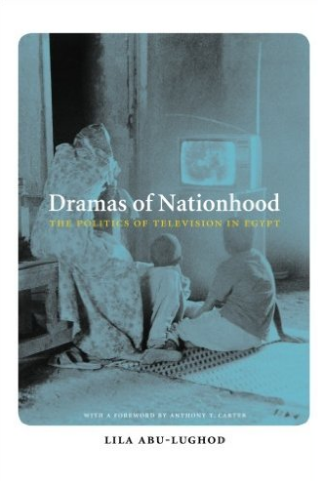 The Politics of Television in Egypt

It is my great pleasure to award the AES Senior Book Prize this evening. I want to thank my wonderful committee, Donna Goldstein and Ken Guest, with whom I had spirited and probing discussions of many excellent and very diverse books. I would also like to thank those who nominated these marvelous books, and took the time to write quite detailed and helpful letters on their behalf. This is a time consuming and generous labor and I want to acknowledge and thank those who wrote these very helpful letters.

I knew that this process would provide a broad education spanning diverse points across the globe as well as exposure to the multitude of approaches to the field of anthropology and this was, indeed, a great privilege. The committee had several months of fascinating reading, but what we had not thought much about prior to taking up this job was what it would illuminate about the anthropological life-course. What kinds of issues, approaches, and analyses are taken up by anthropologists well established in the field? [What are] the differences between a first book (those reviewed by the Sharon Stephens committee) and those of a Senior anthropologist with one or several books already under their belts? The committee began with a set of criteria with which to review our nominations that included: originality, rigor, and maturity of research; an innovative approach to ethnography; theoretical sophistication and depth; thematic prescience, as well as what we believed would be an enduring contribution to Anthropology and beyond.

I am pleased and honored to present this year’s AES Senior Book Prize to Lila Abu-Lughod, for her marvelous work: Dramas of Nationhood: The Politics of Television in Egypt. Chicago Press. This work is steeped within more than a decade of original fieldwork in Egypt, and draws upon wide ranging theorizations of television media and its relationship to citizenship, national identity-formation, gender, Islam, the imagination, and everyday life. Dramas of Nationhood focuses on the national identities at play in serial dramas and argues that these dramas and the conversations that emerge around them in urban and village life, production settings, and in the press, give us insight into how Egyptian citizens are thinking through Islam, the changing norms of gender, citizenship-claims across classes and regions of Egypt, and what are construed to be “proper life goals.” Abu-Lughod unravels the developmentalist ideology and the visions of national progress that once dominated Egyptian television and examines debates inflamed by subsequent strategies for combating religious extremism. At the same time she illustrates through her artful use of ethnographic vignette, the dramatic unfolding of hardships borne by poor Egyptian women in parallel to those more glamorously portrayed in the television serials.

Dramas of Nationhood is written in Abu-Lughod’s characteristically beautiful prose, sophisticated, clear, and often poetic. The breadth of this book’s scholarship and its wide reach to readers concerned with nationalism, modernity, contemporary cultural politics and Islam, both within and beyond the Middle East makes Dramas of Nationhood an exemplary AES Senior book.