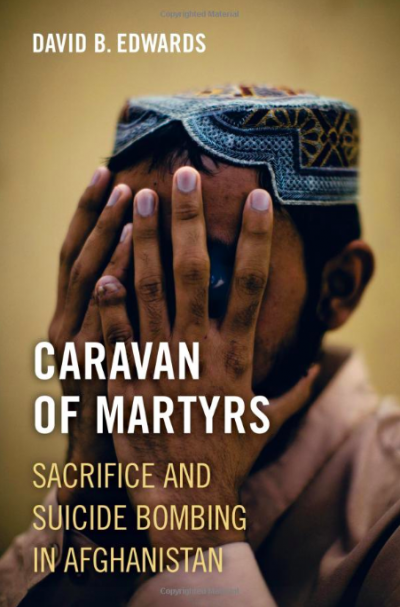 Sacrifice and Suicide Bombing in Afghanistan

by David B. Edwards

Taking up the upsurge in suicide bombing following the end of the Soviet invasion in Afghanistan, Edwards traces its evolution against the backdrop of political movements and events (Afghan resistance to the Soviet invasion, Al-Qaeda, Osama bin Laden, Taliban, the US invasion of Afghanistan following 9/11, the presidential elections of Karzai and Ghani). Drawing upon Hubert and Mauss’s classical text (and beyond), Edwards treats suicide bombing as a form of sacrifice that, through an act of killing, is seen to produce a reality of sacredness: what gets ritualistically rehearsed and politically manipulated in what he calls the ‘sacrifice machine.’ The ethnographic swath of this book is stunning; reaching back into Edwards’ earliest engagement with the region, the breath and depth of terrain covered (with Afghan mujahidin, martyr magazines, Taliban poetry, 1,500 audiocassettes belonging to Osama bin Laden, Pakistani madrasas, Taliban Facebook friends) is breathtaking. Theory and ethnography brilliantly entwine here as in the chapter on selfies: a now commonplace practice of dead or soon-to-be dead martrys posted on Facebook that Edwards smartly analyzes in terms of face—the loss of face, and attempt to recapture it, at a moment when Americans have resorted to drone warfare, which is regarded as both insidious and humiliating. Utterly original, the book is compelling from beginning to end. This is anthropology at its best: a real tour de force.