This thing that I searched so hard for 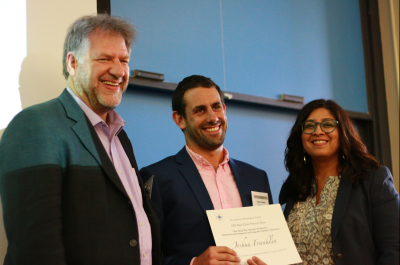 This thing that I searched so hard for

We are pleased to announce the winner of the 2017 Elsie Clews Parsons Prize. At the AES spring meeting at Stanford, Joshua Franklin (University of Pennsylvania) was awarded the 2017 prize for his paper titled: “This thing that I searched so hard for: Normativity and transgression in transgender children’s narratives”.

Click here for a copy of the winning essay

AES Councilor Shalini Shankar (Northwestern U) chaired the committee and delivered the following words at the awards ceremony.

It is my honor to present the AES Elsie Clews Parsons Prize for the best graduate student essay.

Our committee included Hugh Gusterson of George Washington University, Andy Bickford of George Mason University, and Amy Moran-Thomas (a former Parsons winner herself) from MIT, and me. On behalf of AES, I thank the entire committee for their hard work.

This year’s competition had 18 entries. In addition to entries from the US, we had entries from the Netherlands, Australia, South Africa, and the UK. In this strong pool, the paper to which we have awarded the prize stood out as thoughtful, distinctive, and well-conceived.

This year’s prize goes to Josh Franklin of the University of Pennsylvania for his paper, “This Thing I searched so hard for”: Normativity and Transgression in Children’s Transgender narratives.”

Josh’s paper asks the question of what explains the recent visibility of and public interest in transgender and gender variant young people? Does it signal social inclusivity, or does it further a kind of medical pathologization?

To address these queries, the essay presents ethnographic research conducted at a pediatric gender identity program at a large academic children’s hospital in the northeastern United States. Josh draws on data collected in the clinic since its establishment in 2013, following the lives of 25 young people receiving care. While so much of the research on young people foregrounds how adults and medical professionals manage them, Josh offers a fresh set of perspectives offered by young people themselves, contextualized by interviews with their families. Working through this data, the paper aims not to articulate a broad theory of childhood gender identity, but rather, to consider what Josh calls a “precondition of ethnographic inquiry: accepting the perspective and experience of one’s interlocutor as valid.” In other words, he seeks to understand a child’s transgender experience in its own terms, rather than through what he calls “the totalizing frame of biomedical authority.” He offers a carefully calibrated counterpoint to the more sensationalist accounts we see in the news by analyzing conversation interactions and analyzing them in broader ethnographic context. It is this dynamic that Josh was able to capture so vividly that won over the committee.