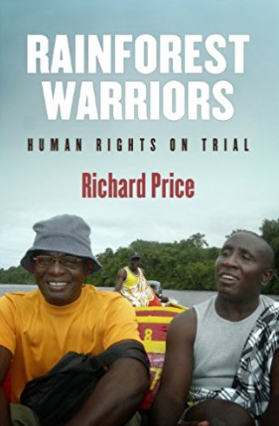 From the Publisher: Rainforest Warriors is a historical, ethnographic, and documentary account of a people, their threatened rainforest, and their successful attempt to harness international human rights law in their fight to protect their way of life—part of a larger story of tribal and indigenous peoples that is unfolding all over the globe. The Republic of Suriname, in northeastern South America, contains the highest proportion of rainforest within its national territory, and the most forest per person, of any country in the world. During the 1990s, its government began awarding extensive logging and mining concessions to multinational companies from China, Indonesia, Canada, and elsewhere.

Saramaka Maroons, the descendants of self-liberated African slaves who had lived in that rainforest for more than 300 years, resisted, bringing their complaints to the Inter-American Commission on Human Rights. In 2008, when the Inter-American Court of Human Rights delivered its landmark judgment in their favor, their efforts to protect their threatened rainforest were thrust into the international spotlight. Two leaders of the struggle to protect their way of life, Saramaka Headcaptain Wazen Eduards and Saramaka law student Hugo Jabini, were awarded the Goldman Prize for the Environment (often referred to as the environmental Nobel Prize), under the banner of “A New Precedent for Indigenous and Tribal Peoples.” Anthropologist Richard Price, who has worked with Saramakas for more than forty years and who participated actively in this struggle, tells the gripping story of how Saramakas harnessed international human rights law to win control of their own piece of the Amazonian forest and guarantee their cultural survival. Richard Price divides his time between rural Martinique and the College of William and Mary, where he is Duane A. and Virginia S. Dittman Professor of American Studies and Professor of Anthropology and History.

His award-winning books include First-Time, Alabi’s World, The Convict and the Colonel, and Travels with Tooy. He is the coauthor, with Sally Price, of Romare Bearden: The Caribbean Dimension, also available from the University of Pennsylvania Press.